The Power Princess seen in Supreme Power was more ruthless, manipulative and insane than the Zarda of Earth-712. After an encounter with Hyperion, she joined the Squadron Supreme and had no compulsions against killing her foes. Later, after a clash with the heroes of the Ultimate Universe, she crossed over to that world to keep an eye on them. She eventually joined the Ultimates after Magneto devastated much of the planet before returning to her own world. During the eventual collapse of the multiverse, due to the incursions, her entire universe was destroyed, with Power Princess along with it.

Whilst the Squadron Supreme were trapped on Earth-616 and living at Project P.E.G.A.S.U.S., one of their scientists convinced Doctor Spectrum to provide a map of each team member’s DNA to study. Years later, the scientist inadvertently created zombie versions of the Squadron using that 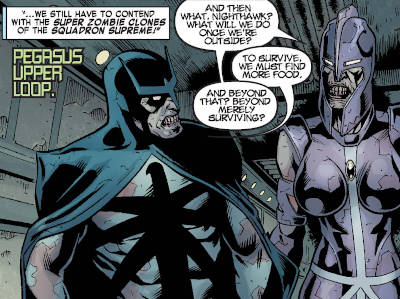 DNA map, corpses, Zero Fluid and some seriously flawed judgement. The zombie clone of Zarda was one of the few zombies that seemed at least somewhat horrified by what they had become. Together, the zombie Squadron were trapped within Project P.E.G.A.S.U.S. until the arrival of an elite military rescue team provided the opportunity to escape. However, before they could escape, Jack of Hearts absorbed the zero energy that was sustaining Zarda and her teammates, destroying her. [Marvel Zombies Supreme #1-4]

On one Earth, Zarda went by the moniker Warrior Woman and was a member of the Squadron Sinister. Together with her teammates, they ruled their world. However, when they sensed the destruction of their world was nigh, they constructed a portal to escape. As the portal could save 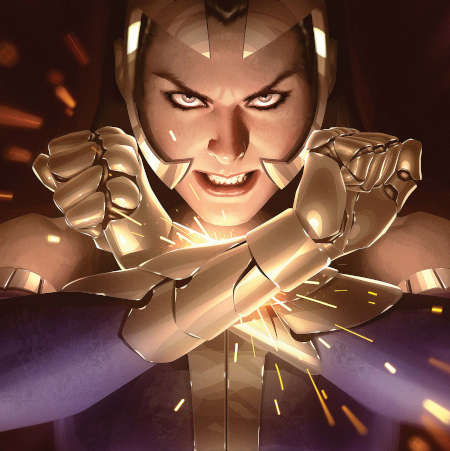 only one person, Zarda killed her teammates and fled her world’s destruction. In the void between worlds, she encountered Power Princess of the Squadron Supreme and stole her lifeforce, allowing her to escape to the prime universe. Posing as Power Princess, she joined a version of the Squadron Supreme as she pursued her own agendas. She later betrayed the team and took control of an alien army and the country of Alambra. When she tried to resurrect Namor as a powerful ally, she was thwarted by the powerless Power Princess and her former teammates. 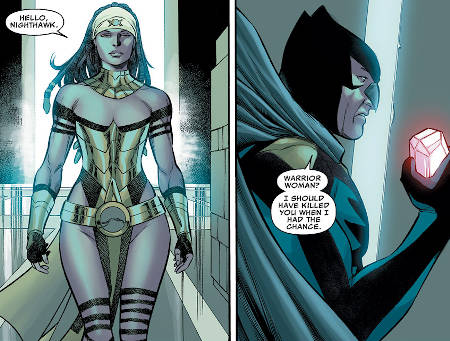 province of Nutopia. Zarda seduced King Hyperion, earning his trust, and was the last person on the team he expected to betray him. When Nighthawk learned of her duplicity, he included her in his plans to kill Hyperion. Later, after Nighthawk was called before God Doom for killing Hyperion and a Thor, Warrior Woman testified against him, resulting in his banishment.