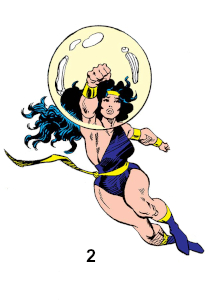 1) Power Princess’ first costume consisted of a light blue one piece that left the arms and legs uncovered. The pattern on the one piece was simple, with a horizontal and vertical white stripe forming a cross pattern and the vertical stripe culminated in a red and white fist design on the chest. A red helmet covered Zarda’s head and the upper half of her face, which was matched by red bands on her wrists and upper arms, and red and white boots. [Defenders (1st series) #112]

2) After her first costume was damaged in the clash with the Overmind, Zarda replaced it with a purple one piece that left her right shoulder uncovered. The one piece was broken by a golden sash across her waist which was complemented by golden bracers on her arms and wrists and a golden band at the top of her purple boots. To reflect the Squadron’s decision to cease hiding their identies, the helmet was replaced by simple golden tiara. [Squadron Supreme (1st series) #2] 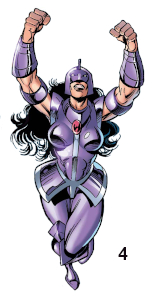 3) When the Squadron ended the Utopia Program, Power Princess donned a new, armored costume consisting of golden armor on her torso, shoulders and arms and purple boots with a golden trim. She also returned to wearing a helmet, this time purple and gold, though she also chose to sometimes wear her simple tiara. [Squadron Supreme: Death of a Universe]

4) Close to the end of her time on Earth #616, Power Princess donned another armored costume consisting of a purple boots, gauntlets, a breastplate, and bracers on her upper arms. She also returned to wearing a helmet that covered the upper half of her face, this time dark purple. She also alternated between wearing purple leggings or leaving her legs exposed. [Avengers (3rd series) #5]