Proteus was born Kevin MacTaggert, the child of Joe and Moira Kinross MacTaggert. Moira was a clan chieftain and student of genetics at Oxford when she met Joe, a Royal Marine commando from Glasgow. Their relationship ended for a time when Moira fell in love with another Oxford student, Charles Xavier. After Charles went off to war, however, Joe weaseled his way back into Moira's life and got her to break off her engagement to Charles in a letter. [Uncanny X-Men (1st series) #389] Moira and Joe were soon married, but only then did Moira see Joe's true face — a cruel man with political ambitions, Joe married her for her family connections through the Kinross land and title. Reportedly afraid to leave Joe or admit the mistake she had made, Moira was beaten repeatedly by her husband during their time together. Eventually she ran away to New York, but Joe followed after her.

Joe beat and raped Moira when he found her, leaving her in the hospital for a week, but finally agreed to leave her alone. There would be no divorce, because Joe still enjoyed the connections Moira's name brought him, but the couple remained separated for years. As a result, Joe never learned that his last act of violence left Moira with child. [X-Men (1st series) #127]

[Note: Revelations about Moira's true nature as a mutant reincarnated through several past lives raise questions about the previous account given above. In Powers of X #6, Moira X's notes indicated she had found genetically-compatible mates for herself and Charles with a deliberate eye towards cultivating powerful, perhaps even Omega-class mutant children. Moira's marriage to Joe MacTaggert may then have been more manipulative on her part than on his. How much she knew about Joe's abusive nature is unknown (there's no indication she married him in any of her previous lives), but it's likely she stayed with him until becoming pregnant out of a calculated risk rather than self-deception.]

Moira raised Kevin in isolation on Muir Island, her private research facility. Their seclusion meant that no one ever learned Moira had a child. Although she tried to love the boy, Moira's bitterness over his conception bled through into their every interaction. Kevin grew up knowing his father was a monster and his mother never wanted him. Kevin's capacity for hatred was unwittingly nurtured by Moira for years, twisting him inside until he wanted nothing more out of his life than to murder his father. His isolation also meant that Kevin never met another person other than Moira, giving him an extremely low regard for human life other than his and hers. When Kevin's powers manifested at an early age, before he even reached puberty, Moira found him slipping beyond her control. An unloved and unstable child with the power to alter fundamental forces of reality, Kevin was unbelievably dangerous. Moira was only able to contain him thanks to the inherent weaknesses in his mutation. His body was still human, and could not support the vast energies produced by his reality-altering powers, causing his flesh to degrade over time. He also suffered from an extreme allergy to metal and could not abide its touch.

Moira constructed a metal cell to house Kevin, wrapped in stasis fields and an atmospheric vacuum to artificially feed him energy and prevent further decay of his body. For over ten years, Kevin was isolated in that cell behind the innocuous name plate dubbing him "Mutant X," while Moira worked on stabilizing his condition. Her work with Kevin made Moira a world renowned expert on genetic mutation, and she eventually received the Nobel Prize for her work in the field. She also familiarized herself with other disciplines, such as mechanical engineering and early forms of virtual reality while teaching Kevin about his powers. She constructed the "Proteus Room" on Muir, hoping to stabilize Kevin's powers using an artificially controlled virtual environment to counter his reality changes. However, none of her work made Kevin safe to be around others or stopped his decay. Still considering Kevin her secret shame, Moira never directly sought assistance on his case, even after renewing her ties to Charles Xavier. [X-Men (1st series) #128, Classic X-Men #36, Excalibur (1st series) #72]

[Note: Conflicting reports exist about Proteus's exact age. The original Proteus Saga stated Moira and Joe hadn't seen each other in twenty years, marking that as Kevin's age. After an early manifestation of his powers at 9-10 years, Kevin then spent a decade in the Proteus Room under quarantine. In Astonishing X-Men (4th series) #8, however, Proteus claimed he was only ten years old when the X-Men first confronted him. It's possible he was being metaphorical, speaking in terms of life experience rather than physical age.]

After a decade of solitary confinement, Kevin got his first chance at release when a fierce battle broke out on Muir Island between Magneto and the X-Men. Wolverine was incidentally slammed into Mutant X's cell door, jarring loose the inhibitor fields. [X-Men (1st series) #104] Seeing a chance at freedom, Kevin's body was nonetheless too weak to make the escape on his own. The artificial energy feeding his body had shut down, causing him to quickly atrophy. He found an opportunity when Angus MacWhirter passed by his cell.

Angus was a ferry captain from the mainland who blamed the X-Men for his recent problems, and snuck onto Muir Island to cause trouble out of spite. Kevin ambushed Angus and instinctively used his power for the first time to transfer his energy form into a new host body, leaving his own mummified frame behind in his cell. Accessing his host's memories and experience, Kevin gleaned enough knowledge of electronics and computers from Angus's mind to reprogram the Muir Island system to believe he was still caged. [X-Men (1st series) #119, 128]

Mutant X realized that this stolen body was less effective than his original skin at housing his energy form. Reasoning that a more powerful host might sustain him for longer, Kevin decided to possess another resident of Muir Island, the powerful mutant known as Phoenix. He stalked Jean Grey for several days in Angus MacWhirter's body, looking for the opportunity to grab her while she was alone. Significantly weakened by the time his opportunity came, Mutant X was unable to overcome the Phoenix, and was driven off by her psychic assault. He went after Lorna Dane next, but ultimately ended up taking the body of her protector, one of Jamie Madrox's duplicates. [X-Men (1st series) #125] 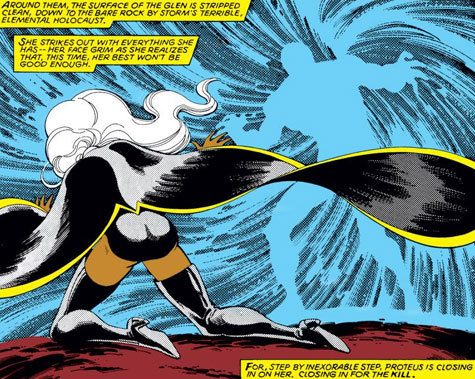 To avoid further conflict, Mutant X cut his losses and fled Muir Island aboard Angus MacWhirter's boat before the X-Men arrived in force to confront him. On the Scottish mainland, he transferred his essence into the body of Fergie Duncan, rejuvenating himself in the process and leaving the X-Men none the wiser about his current identity. He had just jumped bodies again from Fergie into a passing policeman when the X-Men Wolverine and Nightcrawler caught up with him. Wolverine deduced Mutant X's identity and a confrontation began between the mutants. As they squared off, Kevin rejected the Mutant X label and started calling himself Proteus after the changing god of myth and the room Moira used to control him as a child.

Proteus tried to possess Wolverine's body, but was forced out by the Adamantium in Logan's skeleton. Nonetheless, he quickly incapacitated Nightcrawler and Wolverine by distorting spatial and substantial reality around them. Storm arrived and injured Proteus's host with her lightning, but Proteus grounded her and attempted to claim her form as his own. Moira managed to drive him off by firing sniper rounds at her son through a long-range scope, staying out of his field of vision and the range of his powers. Fearing the metal in Moira's bullets, Proteus fled and continued his trek towards Edinburgh and his father. [X-Men (1st series) #126-127] 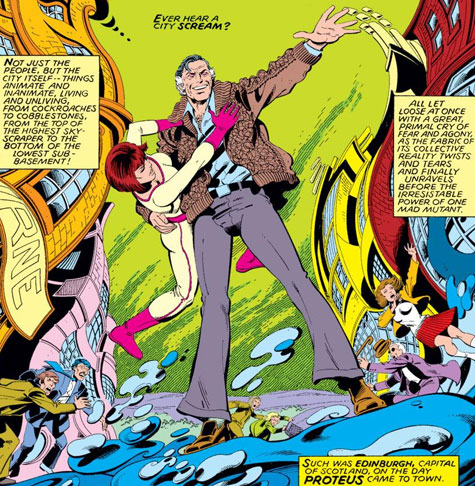 After hopping bodies again to rejuvenate, Proteus approached Joe MacTaggert's home in the form of a shop girl named Jennie Banks. Kevin found his father's body to be an excellent fit, synching with him in a way he never had with a host body before. Reveling in his powers, Proteus snatched up Moira (who had reluctantly come to warn Joe about his son), and challenged the X-Men to defy him. Cyclops led the X-Men in hit-and-run tactics against Proteus, trying to make him burn out his body while leading him away from the city and any replacement hosts.

As Joe MacTaggert's flesh withered away, it was Colossus (in his human form) who accidentally destroyed the body by striking it against a wall, causing it to collapse into dust. Left as a formless energy wraith, Proteus furiously struck at Colossus with his powers, sadistically tormenting his attacker. In his rage, however, Proteus forgot who he was lashing out at and allowed Colossus to get too close.

As Piotr transformed into his armored state, his metal fists plunged into Proteus's energy lattice. Proteus could not abide this massive disruption of his form, and he exploded, scattering his energies across the surface of the planet so that he could never reform. [X-Men (1st series) #127-128]

With 7,738 Issue Summaries online, chances are you may not have read the following Issue Summary: