Not much is known about the early life of Pantu Hurageb. He had a deep hatred of heat and humidity from an early age, probably due to the climate wherever he grew up. By his teens, Pantu developed his mutant abilities and became radicalized. He joined the Mutant Liberation Front in the guise of Reaper, training under the militant Stryfe as a terrorist and “freedom fighter,” striking against mankind on behalf of mutantkind. Reaper was one of the more bloodthirsty members of 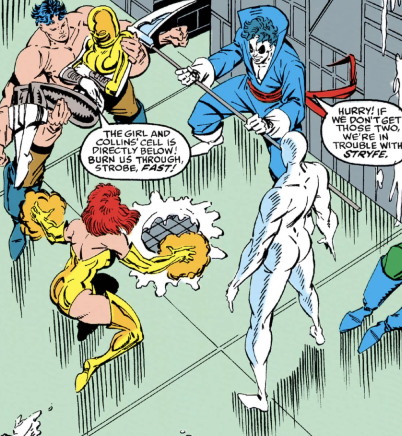 the MLF, especially given his new trademark fighting style. Reaper was gifted with a scythe augmented by Stryfe’s futuristic technology, amplifying his natural mutant gifts. A single strike would leave a victim paralyzed and helpless for his next, finishing blow.

Reaper was present when the Mutant Liberation Front declared themselves to the world by bombing a federal energy research facility in the name of mutantkind. [New Mutants (1st series) #86] After a second bombing, the MLF moved on to a rescue mission. The former New Mutants Rusty and Skids had been framed as mutant terrorists by Freedom Force in order to keep them quiet about certain government projects. Stryfe thought these political prisoners would also be the perfect new recruits. At the prison hospital, the Mutant Liberation Front were intercepted by Stryfe’s arch-nemesis, Cable. Reaper managed to tag Cable with his paralyzing scythe, but Cable was still strong enough to swing his limp metal arm and clock Reaper. Once Strobe melted the arm, though, Cable was left behind and the MLF acquired Skids and Rusty. They teleported away via Zero before the prison authorities could stop them. [New Mutants (1st series) #87]

Reaper and the MLF continued staging various attacks on human organizations and symbols as time passed. [New Mutants (1st series) #100] Meanwhile, Cable stepped up his personal war against Stryfe by recruiting the New Mutants and transforming them into his X-Force. When they launched a surgical strike against a major MLF installation hidden in Antarctica, Stryfe deployed Reaper, Wildside, Forearm and Kamikaze to oppose X-Force once they entered the facility. The cocky Reaper squared off against Shatterstar, a new recruit from Mojoworld. Shatterstar was a warrior-born, not one of Xavier’s pupils, and he effortlessly cut off Reaper’s hand during their duel. A disbelieving Reaper was sure Shatterstar wouldn’t kill him, but ‘Star only left his opponent alive out of deference to his squad mates’ sensibilities, not a lack of killer instinct. [X-Force (1st series) #1] 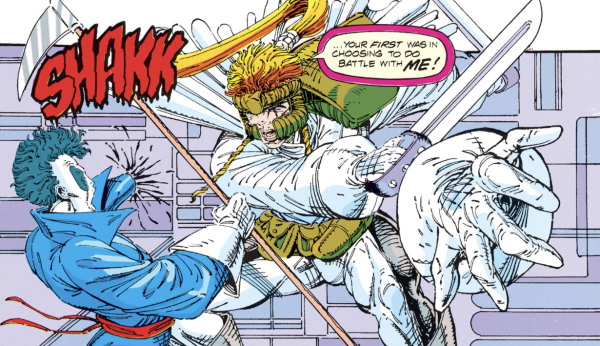 Reaper recovered, and was fitted with a bionic hand. The Mutant Liberation Front’s next mission sent them into a federal prison to rescue Slab and Hairbag of the Nasty Boys.  Slab was brother to the MLF’s Thumbelina, and Stryfe was also building ties to the Nasty Boys’ patron, Mister Sinister. The government-sponsored X-Factor was on-site during the raid, and the MLF delayed the heroes while Thumbelina located Slab. Reaper did well for himself sparring with Havok and Polaris, despite his poor showing against Shatterstar, at least until Polaris started magnetically repelling his scythe. The MLF fled the middle of the battle through Zero’s portal, and nearby lost Stryfe when Polaris tried to magnetically pull him back through. Mercifully for Reaper and the MLF, they saved their boss from capture. [X-Factor (1st series) #77]

The MLF’s next target was a Doctor Tucker and his medical research. Tucker believed he had developed a means of identifying mutants in the womb, selling it as a form of informed consent for 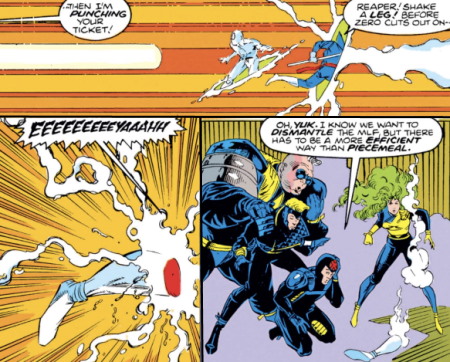 mothers to consider terminating their pregnancies. The MLF planned to kill Tucker and wipe out his files and research to prevent this practice from ever gaining prominence. Reaper thought this mission had so much merit that they might even send out a press release to reach like-minded supporters. He was just considering the talk show circuit when X-Factor arrived to put a stop to their chaos. Tucker was already mortally wounded, and so the Mutant Liberation Front only sparred with X-Factor briefly before Zero started portaling them out. Havok’s plasma beam nearly got Reaper as he fled, and Zero closed his portal too fast, severing Reaper’s lower leg. [X-Factor (1st series) #78] 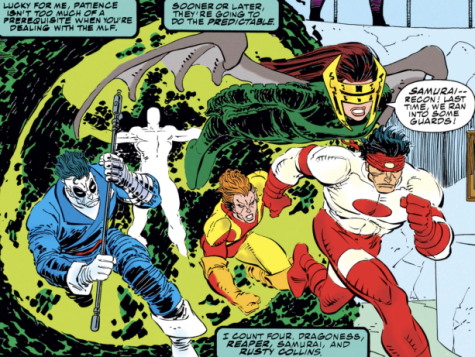 As Stryfe began to obsess over his father figure, Apocalypse, he sent out the Mutant Liberation Front to confiscate relics and artifacts that touched upon the Eternal One’s slow progression through the ages of man. At the Museum of Egyptian Antiquities in Cairo, Reaper joined Samurai, Rusty Collins and Dragoness in retrieving a hieroglyph based on En Sabah Nur. Reaper was already complaining about the heat when Cable crashed the party. The Askani’son quickly knocked out Dragoness, shot Rusty and blew up Reaper’s bionic hand, forcing the MLF to flee for their lives. Cable and his partner Garrison Kane tracked the MLF to the Yucatan and re-engaged the terrorists. Reaper didn’t even have the time to get fitted with a new bionic hand, and instead wore a short scythe appendage over his missing limb. Regardless, he and his squad mates were cut down by Cable using a single bioelectric dispersal effect on his hand-cannon. [Cable: Blood & Metal #1-2]

Reaper and Forearm acted as representatives for Stryfe in his dealings with Mister Sinister. They provided the geneticist with a genetic matrix from their leader in exchange for the captive X-Men, 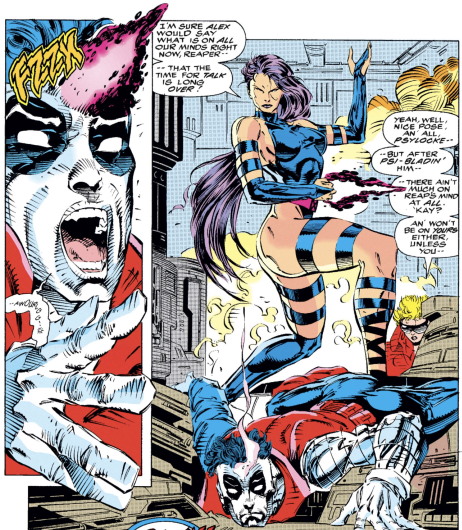 Cyclops and Jean Grey. However, this and other maneuvers by Stryfe finally brought his operation to the attention of the X-Men themselves. A combined strike force of X-Men, X-Factor and X-Force tracked down the MLF’s main base of operations in Dust Bowl, Arkansas before laying siege to it. Quicksilver knocked out Wildside to save Gambit from him, but Reaper struck the speedster from behind and prepared to execute the paralyzed Quicksilver and Gambit together. Reaper savored the moment too long, and his scythe was incinerated by Havok’s plasma blast. Reaper himself was rendered insensate by Psylocke and her psychic knife (the focused totality of her psionic powers). [X-Cutioner’s Song crossover]

In the aftermath of these machinations, Stryfe was believed dead and the Mutant Liberation Front as a whole were rounded up and imprisoned through X-Factor’s government connections. Before they could be transferred to the Vault from a federal penitentiary in Roanoke, though, Reaper was freed alongside Wildside, Tempo and Forearm by a new mutant visionary named Reignfire. He added them to his new Mutant Liberation Front members Moonstar and Locus to pick up where Stryfe left off. The MLF attacked the home of Project: Wideawake’s Henry Peter Gyrich to kidnap the anti-mutant government director. They planned to hold Gyrich as a prisoner of war until actions against mutantkind were brought to an end. 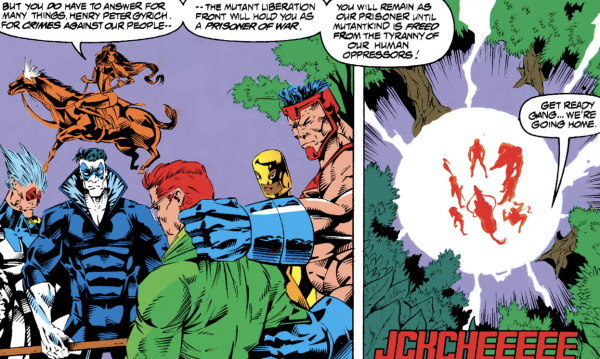 Given the optics of the scenario, the dirty job of rescuing someone as hated as Gyrich fell to X-Force. Showing more guts than brains, Reaper challenged Shatterstar again when the mutant strike force infiltrated the MLF’s base. Moments later, Reaper had been relieved of yet another of his limbs. Wildside managed to get his claws on Siryn and tried to coerce Shatterstar into 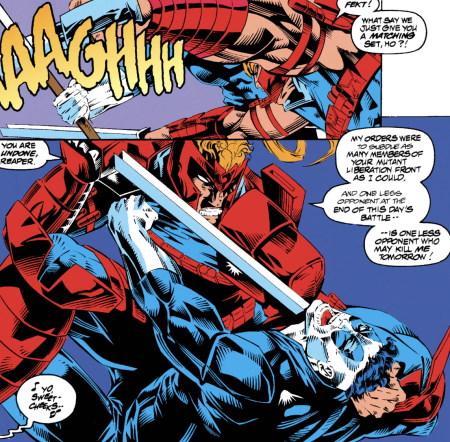 surrendering to save his squad mate. Shatterstar put his sword down and allowed Reaper to back away behind his partner. Wildside thought he had won, pulling Shatterstar’s sword from the ground and brandishing it around. He was completely surprised when ‘Star demonstrated his little-known mutant ability to channel vibratory blasts through the sword, even at a remote distance. Wildside accidentally blasted Reaper with a full charge as the sword went off when pointed at him. Shatterstar quickly overpowered the shocked Wildside and regained control of the situation. [X-Force (1st series) #26-28]

[Note: X-Force #28 and Annual #3 inaccurately refer to Reaper as having been killed by Shatterstar’s blast. Considering he was being written off to appear in the Ultraverse, this may have been a miscommunication between editorial offices.] 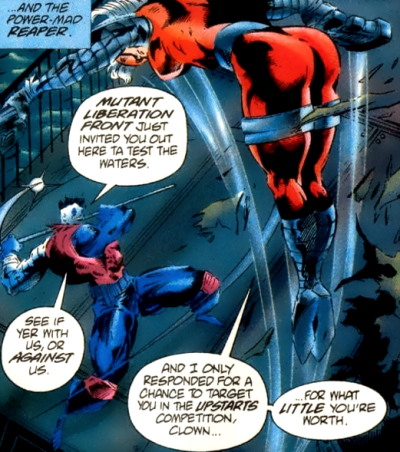 Reaper challenged Siena Blaze on behalf of the Mutant Liberation Front, intent on testing whether she would be a valued addition to their cause. Siena accepted his challenge, only to try and kill Reaper as a part of the ongoing Upstarts competition. Reaper was dismissive of Siena Blaze at first because of her handheld blasters, saying no self-respecting mutant would have to rely on a gun. After destroying her weapons, Reaper learned the real reason for Siena’s armaments was to safely channel her awe-inspiring electromagnetic disruption powers, which threatened the integrity of Earth’s atmosphere and electromagnetic field every time she used them. Too angry to worry about caution any longer, Siena unleashed her power on Reaper in a massive explosion. At the same time, a world away, the feral Ultra named Amber Hunt was being hunted by Shuriken, agent of Aladdin, and the precognitive ‘Strike. Her energetic powers (spanning the electromagnetic spectrum similar to Siena’s) swelled within her and erupted. 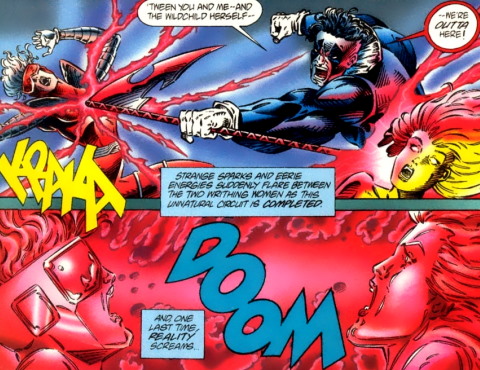