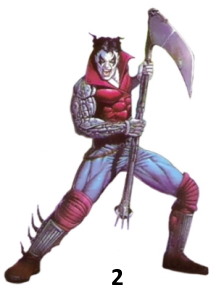 1) Reaper’s original costume was a blue one-piece with a high collar around his exposed neckline. He wore white boots and gloves and a red sash around his belt. He carried his trademark scythe with him at all times. As his losses piled up in battle, Reaper received a noticeable bionic left hand and bionic right leg. At one point, instead of an artificial hand, he had a shortened scythe blade attached to his arm stump. [New Mutants (1st series) #86]

2) At one point, Reaper started wearing an alternate version of his costume. It typically included a red sleeveless top, showing off the bionic muscles he acquired over time. [X-Men (2nd series) #15] 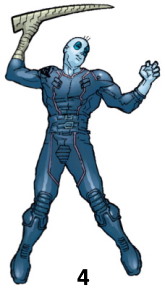 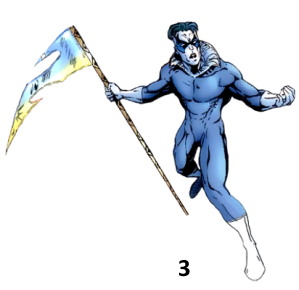 3) In the Ultraverse, Reaper began wearing a streamlined version of his original costume. This blue suit was tighter, with a smaller collar and no sash. [All New Exiles Infinity]

4) As an agent of Weapon X, Reaper received a black leather costume with padding, pouches and clasps. His bionic hands were now capable of morphing into a scythe blade on their own. He also had, frankly, a truly ridiculous haircut. [Weapon X (2nd series) #7]

--) Since the Decimation, Reaper has mostly been seen wearing versions of his second costume, although occasionally the red in his shirt is replaced with blue or grey.