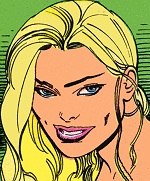 While most mutants manifest their powers during puberty, Rachel Argosy, a musical teacher from Twin Forks, Maine, had already passed her twentieth birthday when her skin turned blue. Apparently, the delay was caused by her having survived childhood meningitis. The change of her skin tone wasn’t the only change, however. Whenever musical instruments were played in close vicinity to Rachel, “weird things” would happen. She could, among other things, use the music to levitate herself, create hallucinations or manipulate emotions.

Not out to harm anyone with her newfound abilities, Rachel continued to teach music. Already well-liked before she manifested her powers, Rachel became tremendously popular with the 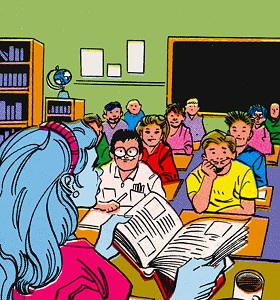 students attending Twin Fork High School, who soon nicknamed her “Rhapsody.” However, the parents were not too fond of an overt mutant teaching their children and, after several complaints and a hearing in front of the school board, it was decided to terminate Rachel’s employment.

Two days later, Harry Sharp, the biggest supporter of her being fired, was found dead in his home by his wife. Apparently, his heart had just stopped. When Mrs. Sharpe looked out of the window, she saw Rhapsody lurking outside and she immediately assumed that the blue-skinned mutant had killed her spouse. Rachel was hunted by the police but evaded them several times, thanks to her powers. Eventually, the local authorities asked the governmentally sanctioned X-Factor for help, and Quicksilver and Multiple Man were dispatched to Twin Fork to deal with the crisis.

When the two mutant heroes caught up with rhapsody, she managed to entrance them with her music. Taking a liking to Multiple Man, Rhapsody created  a hallucination specifically designed for 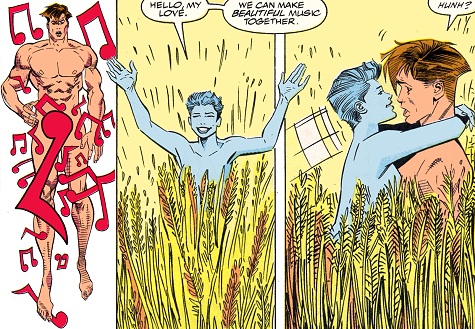 him, as it was based on the Kansas farmhouse he grew up in, with the two of them making love in the cornfields. However, when she wrestled Jamie to the ground, the impact caused a couple of duplicate to appear that hadn’t been exposed to her music. Rachel was taken into custody but she assured Multiple Man that she hadn’t hurt Sharpe. [X-Factor (1st series) #79]

Convinced of her innocence, Multiple Man tried to find evidence pointing at some other culprit but found none. Fearing that Rhapsody would be found guilty during a mock trial, he was ready to 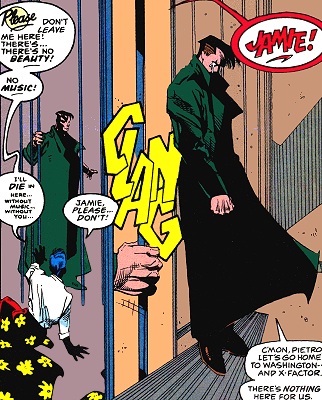 bust her out of prison. When he arrived,  he discovered that Rachel had already gotten out of her cell, as a rookie guard had played his harmonica and she had used the music to make him hand her the cell key. However, just as they were about to escape, Rhapsody slipped her tongue and accidentally revealed that she had tried to use her power on Sharpe to make him see his error, only to accidentally cause his death when he was overwhelmed by sheer ecstasy. [X-Factor (1st series) #80-81]

Feeling used and manipulated, Multiple Man returned Rhapsody to prison where she belonged. She was eventually put on trial and sentenced to a prison term. It has been confirmed that Rachel is one of the few mutants on the planet who have retained their abilities and mutations post M-Day, during which 90-95% of Earth’s mutants lost their powers. [X-Men: The 198 Files]

Apparently, Rhapsody has been released from prison rather recently, for a woman matching her description was spotted in San Francisco. She appeared among a crowd of mutants protesting for equal right rights in response to the “Human Now! Coalition” proposition to legislate when and how mutants would be allowed to breed. [Dark Avengers/Uncanny X-Men: Utopia] Her current whereabouts and activities are unknown.