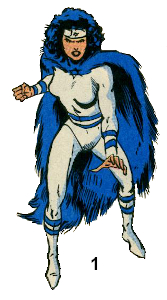 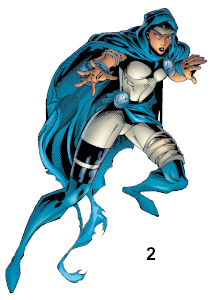 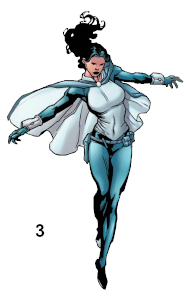 1) Sabra's traditional costume comes in the national colors of Israel. Her white body suit has two thin blue bands circling her waist, her gloves, and her boots. She wears a white headband with a blue Star of David in the center. A larger Star of David rests on her chest and acts as a clasp for her blue, quilled cloak. [Incredible Hulk (2nd series) #250]

2) Sabra later adopted a variation to her standard costume. Her white body suit was now sleeveless, with knee-high blue boots and blue bands around only her right leg and left arm. Her wrist shooters were now part of a more-obvious set of mechanical gauntlets. Her headband no longer had the Star of David, but she wore two clasps with that symbol -- one holding torn blue cloth at her belt, and the other attached to her new hooded cape. [X-Men (2nd series) #68]

3) Sabra’s next costume was a blue full bodysuit with a secondary white layer covering her upper body. She wore a utility belt, enlarged white cuffs for her wrist-shooters, and a Star of David at her clavicle. With this costume, Sabra either wears a simple, half-length cape that’s blue on one side and white on the other, or no cape at all. This implies her anti-gravity tech has been relocated to elsewhere in her uniform. [Civil War: X-Men #1]