• Gelatinous body has a high degree of
resistance to penetration wounds and
can be rendered amorphous, letting him
flow onto his victims and disable higher
brain functions while he forms into a
transparent resin around their bodies,
manipulating them like marionettes
while they asphyxiate underneath his living goo

Sack is a mutant with the ability to envelope his victim in his own protoplasmic tissue, allowing him to subvert their wills while concealing his presence, a process that generally proves lethal to its victims. Sack descended from the Morlocks who were living in the tunnels beneath New York City—the same Morlocks whom Mikhail Rasputin appeared to drown when he flooded their tunnels. In truth, though, these Morlocks were merely whisked away to a strange, alternate dimension, where they inhabited the harsh landscape known as the Hill.

Sack spent 10-15 years of his life living in this hostile domain, spending each day battling other mutants on the Hill in a struggle to reach Mikhail’s palace at the top. Eventually, Sack reached the top and became a member of Mikhail’s elite fighting force, Gene Nation. Predictably, Sack’s time on the Hill hardened him into a merciless killer with little respect for the lives of others, and instilled in him a proud, battle-hardened attitude. Angered that their Morlock forebears seemingly acquiesced to subjugation by humans, Sack and his peers grew resentful both of them and of the humans back on Earth. This anger, coupled with their hostile environment, helped turn Sack and the rest of Gene Nation into violent, murderous terrorists. [Uncanny X-Men (1st series) #325]

Somehow, Gene Nation obtained a way of traveling back to Earth, where they committed terrorist attacks against humans as payback for perceived past transgressions. After one such attack killed 33 humans at a nightclub, the X-Men began to investigate. Sack used his mutant powers to hijack 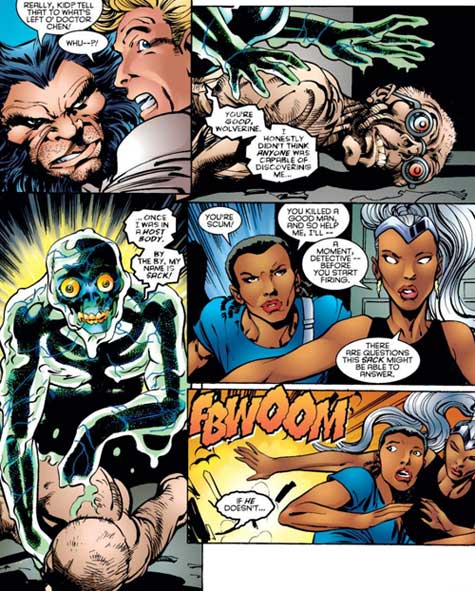 control of the body of the doctor performing the victims’ autopsies. When the X-Men came to investigate, he tried to misdirect them, only to be discovered by Wolverine. With his cover blown, Sack revealed himself and, with the help of his colleague Vessel, battled the X-Men. Sack intended to take control of Cannonball’s body in order to kill him, but Cannonball outfoxed him by blasting full-speed into the ground. Cannonball’s innate mutant power of protection from kinetic energy saved his own life, and successfully sheared Sack off of his body. The obliterated Sack appeared to die. However, a portion of his body, reanimated by Vessel’s mutant power, crept into the ground to recover. [Uncanny X-Men (1st series) #323-324]

Sack rejoined his Gene Nation peers and their leader, Marrow, in the sewers. On the anniversary of the Mutant Massacre, Gene Nation intended to kill 100 humans for every mutant that died at the hands of the Marauders that day. When their plans garnered the attention of the X-Men, Sack 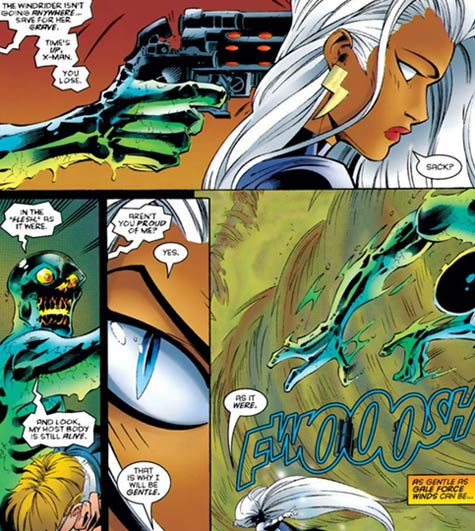 once again tried to ambush them by disguising himself as a civilian.  Partially successful, he managed to pull a gun and clip the former Morlock leader Callisto in the shoulder. However, he underestimated Storm’s prowess. Moments after he bragged to Storm about sparing the life of latest host, she subdued him, but showed him mercy in return for the mercy he showed his victim. Gene Nation’s plan was eventually thwarted when Storm bested their leader, Marrow, in a knife-fight and diffused the bomb. Sack and his cohorts were taken into custody. [Uncanny X-Men (1st series) #325]

Sack and the surviving members of Gene Nation escaped and returned to the Hill, where they reunited with the Hill’s ruler, Mikhail Rasputin. Eventually, they received a visit from Storm, who met with Mikhail. When she learned that Mikhail intended to send Gene Nation through a portal to detonate a bomb in New York City, Storm deftly delayed them and forced Mikhail to open a portal transporting all of them back to Earth. Once back in the Morlock Tunnels, Storm and the X-Men managed to sweep the bomb to the surface and into the sky, where it exploded safely. After Storm appeared to kill Mikhail, Sack and Gene Nation swore fealty to her. Now stranded on Earth, Storm decided to rehabilitate them. Since they were so used to harsh environments, she sent them all to Africa and made work in an impoverished village, where they were to help grow food. She warned them the X-Men would be watching in case they fell out of line. [Storm (1st series) #3-4]

Sack remained in this village for an unknown duration of time. When Agent Zero began hunting down and executing the former members of Gene Nation, somehow Sack eluded him. Most of his peers, however, were not so lucky. [Weapon X (2nd series) #19-21]

Sack managed to retain his powers after M-Day depowered 99 percent of the world’s mutants. Like most mutants who retained their powers, he sought asylum at the Xavier Institute. He and his peers discovered, though, that their asylum was slowly transforming into internment, thanks to the Office of National Emergecny (O*N*E) and its omnipresent Sentinels. Sack also took umbrage at the X-Men’s continuing an “us vs. them” mentality with the mutants they didn’t like. Along with Fever Pitch and Erg, Sack tried to leave the grounds, only to be stopped at the door by the guards. Tiring of having to argue for their freedom, Sack and his peers fought back. Sack enveloped one of the guards and may have killed him had the enigmatic Mr. M not intervened. 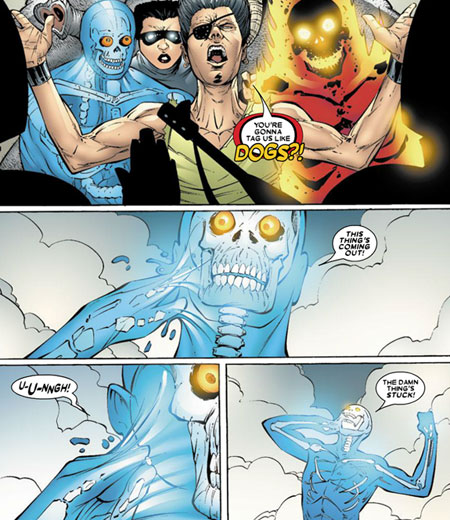 Eventually, the O*N*E agreed to let these refugee mutants, known as “the 198,” leave the grounds under the condition that they consent to having a tracer tag implanted under their skin. Sack agreed to the operation and received his tag. However, he and the 198 later discovered that the tags were engineered to trigger electroshocks if their wearers misbehaved. Enraged, Sack tried to remove his tag from his protoplasmic tissue, only to discover it was bonded to his skull, and therefore irretrievable. Mr. M once again came to the rescue, using his incredible mutant powers to remove Sack’s tracer tag. [X-Men: The 198 #1-5]

At some point—perhaps after its destruction—Sack left the grounds of the Xavier Institute. Despite becoming a prisoner the last time he sought refuge with the X-Men, he later accepted Cyclops’ offer of sanctuary for all mutants on the island nation of Utopia off the coast of California. While there, he staked out a section of the island for himself and tried to repel those he felt were intruders. When three young X-Men “trespassed” on his territory, Sack enveloped them with his protoplasm and threatened to kill them if their friends didn’t leave him alone. According to Psylocke, who defeated Sack and freed his captives, his actions would have cost his three hostages their lives had he not inadvertently overextended himself. Psylocke chose to let Sack live in order to teach a lesson to the younger X-Men about the ethics of killing dangerous foes. [Psylocke #1]

Despite nearly killing three of the island’s other inhabitants, Sack was allowed to stay on Utopia. When Bastion quarantined Utopia and pummeled it with wave after wave of Nimrod Sentinels, Cyclops deputized all of the island’s inhabitants and asked for their help in defending it.  Sack 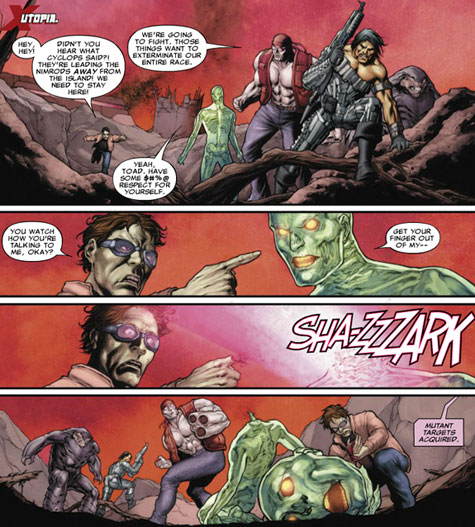 answered the call to defend his new homeland, proudly going into battle against the Nimrods. When his fellow refugee Toad tried to convince him to flee to safety, Sack asked him if he had any pride at all. However, Sack’s pride proved to be his undoing, as he was unceremoniously decapitated by an attacking Sentinel. Worse, the robot then crushed his skull, basically ensuring his death. Although Sack died, he died fighting in defense of his territory—a fitting fate for a jaded exile of the Morlock Tunnels raised in the hostile realm of the Hill. [Second Coming crossover]