When a young Irish woman traveled to Buenos Aires, Argentina, she met a local priest while doing volunteer work in a mission for the poor. Working side by side on a daily basis, the girl and the priest found themselves attracted to one another and gave in to passion… at least once. Nine months later and, long returned to her native County Kerry in Ireland, the Irish woman gave birth to her daughter, Anna. 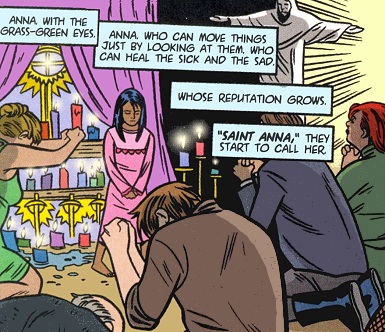 The girl’s dark skin tone immediately gave away her heritage and the incident was considered quite a scandal in the small community. However, as Anna grew older and manifested mutant healing abilities at a rather early age, she was considered a religious wonder. Word spread of the miracle healer and the little girl soon found herself worshipped as “saint” Anna. Her reputation continued to grow but, at the age of sixteen, Anna wanted more for herself and went to Hollywood to audition for the latest incarnation of X-Force, a group of young mutants exploiting their status as celebrities for personal gain.

Given the group’s high mortality rate, there was soon an opening for Saint Anna and some other new members to join. Right before a press conference, during which the new members were introduced to the media, X-Force were briefed on their first mission. They were to rescue Paco Perez, a boy from the People’s Republic of Bastrona, whose parents had died while trying to cross the border. Apparently, the child was a mutant with explosive powers and the high ranking officials of the communist country wanted to harness his abilities to turn him into a weapon of mass destruction. [X-Force (1st series) #117] 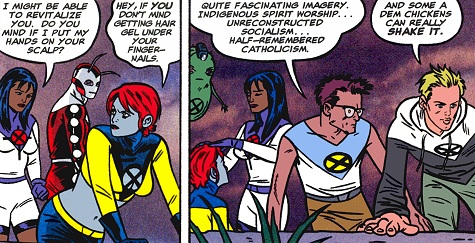 healing powers came in handy, as she could use them to re-vitalize her exhausted teammate. However, she also discovered that her powers had limits, for she could do nothing for Bloke, another new member of the group, when he was gravely injured during an explosion. It became also quite clear that Anna’s religious beliefs weren’t as deep as her moniker and her attitude suggested, for she sided with a few teammates who proposed killing their Bastronian contact person in retaliation as he had sold them out. [X-Force (1st series) #118]

When X-Force made their way to the facility in which the Perez boy was being held, they were confronted by the Bastronian army. Sadly, Saint Anna was hit by a bullet during the battle, while her team leader, the Orphan, was freeing little Paco. After U-Go Girl teleported the team back home, Saint Anna was on the brink of death and she made the Orphan promise to track down her father in Argentina and give him her mother’s ring. She then crumbled to dust and was inhaled by the startled Orphan before he knew what was happening.

The Orphan remained true to his word and located Anna’s father in a slum of Buenos Aires. Although he was no longer a priest due to the affair with Anna’s mother, he was still devoting his time to help the poor. As he had never even met his daughter, he wanted to learn as much as possible about Anna but, as the Orphan hadn’t known her that well, he could only provide some kind words about his late teammate. However, he suddenly sneezed and Anna’s ashes engulfed her father, making him experience her entire memories. Anna’s father joyfully thanked the Orphan for this gift and he also agreed to take in little Paco secretly, so that he wouldn’t be exploited by anyone else. [X-Force (1st series) #119]