• Bio-electric abilities enable her to sense and distinguish
between humans and mutants, detect astral forms,
produce disruptive pulses to scramble neural activity
and induce short-term amnesia, and enter an
electro-transitional state, becoming a "living hologram"
undetectable to natural senses unless she chooses
to be, able to pass through solid barriers, and travel
at the speed of thought

[NOTE: There was some debate if the character called Screener who appeared in Avengers (1st series) #357 was actually Scanner, who appeared with the Acolytes from Uncanny X-Men (1st series) #300 onward. According to the Official Handbook of the Marvel Universe A to Z, Vol. 1, they were intended to be the same character. Her real name was only revealed in the Marvel Handbooks.] 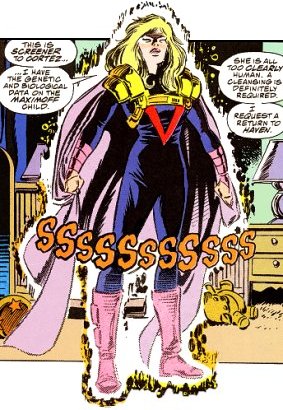 Like many of her fellow Acolytes, the early life of Sarah Ryall aka Scanner is unknown. She was recruited by Fabian Cortez as part of his second generation of Acolytes. In orchestrating Magneto's demise, Cortez created a martyr for mutantkind and manipulated Magneto's memory to recruit an army of fanatical followers. Unlike most Acolytes, Sarah took a codename rather than be called by her surname. She initially used the moniker Screener and used her powers to evaluate Magneto's young granddaughter Luna. During her visit to Avengers' Mansion, she found that despite having a mutant father and Inhuman mother, little Luna was a baseline human. She was discovered by Luna's Inhuman nanny and Lockjaw but used her powers to erase their memories before teleporting back to the Acolytes' base. The information gathered during this mission would later be used by Cortez as leverage in his bid to secure the loyalty of the Acolytes following the return of Magneto and the arrival of his new herald, Exodus. [Avengers (1st series) #357, Bloodties Crossover]

Scanner proved to be a loyal Acolyte and helped in the defense of their base of operations when they were attacked by the X-Men. Her mutant powers made her the perfect envoy and spy. However, Scanner was not nearly as filled with hate or as vicious and aggressive as many of her new teammates.  When the Acolytes attacked a hospital and were opposed by X-Factor, she 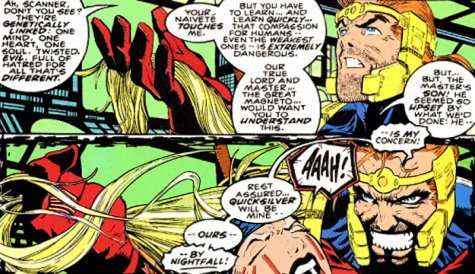 witnessed the senseless brutality as well as the condemnation of these actions by Magneto's son, Quicksilver. Upon returning to Cortez, she questioned the necessity of the attack. Cortez railed at the young woman, grabbing her harshly by the hair as he spewed the extreme, anti-human sentiments that he had gleaned from Magneto's teachings. This was but the first of many times that Scanner would be physically assaulted when she questioned her superiors among the Acolytes. [Uncanny X-Men (1st series) #300, X-Factor (1st series) #92]

The Acolytes were soon joined by Exodus who heralded the return of Magneto. Scanner was among the Acolytes welcomed to the haven Magneto had created for them in Avalon, an orbital space station. She had little chance to know Magneto firsthand. The X-Men organized a proactive strike to stop Magneto which left him in a vegetative state. [X-Men (2nd series] #25, Uncanny X-Men (1st series) #304] 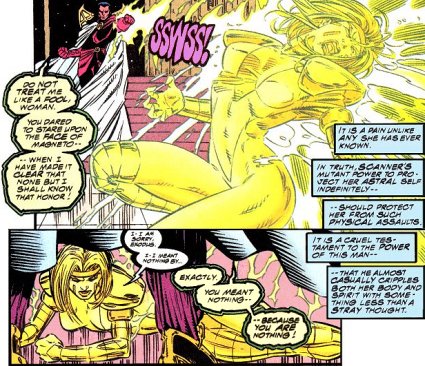 that he was as brutal and uncaring a master as Cortez had been. While delivering a simple message to Exodus, she curiously glanced over at the catatonic Magneto. Exodus flew into a rage, assaulting her and reminding her of her utter insignificance in his eyes. This occurred the same day as the Acolytes' trial of the Neophyte. The arguments presented there by Neophyte and the Acolytes' newest recruit Colossus shook the Acolytes' faith to the core. This was but the first of many challenges that Scanner and her fellows would face in a short span of time. [Uncanny X-Men (1st series) #315]

Avalon fell shortly after this, destroyed in a colossal battle between Exodus and Holocaust, a refugee from the Age of Apocalypse reality that he had found adrift in space and foolishly brought aboard. The Acolyte Voght sought the X-Men's aid and teleported Cyclops and Phoenix to Avalon. Together, they helped the Acolytes survive and make their way to Earth. Scanner and several other Acolytes were in the group rescued by Cyclops. They found themselves stranded in the Australian Outback. Cyclops took firm leadership over the Acolytes, hoping he could lead them to 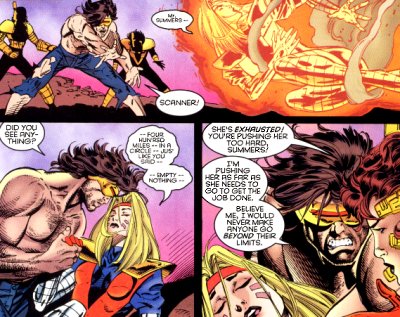 the X-Men's former outback base. He pushed Scanner to expand her searches well past her limits. But he did so in a supportive way,  even carrying her for fifteen miles after she passed out from overexertion. Scanner couldn't help but be impressed by the care that Scott showed for her and the others, despite the fact that they were enemies. She had not experienced this care from either of the fanatics who had led the Acolytes during her time with them. Once Cyclops got the Acolytes to safety as promised, Scanner and the others agreed to turn themselves in to the authorities for their past transgressions. [X-Men (2nd series) #42-44]

Despite this, Scanner and the others remained together and wound up in South America where they formed a large enclave of new Acolytes who worshipped Magneto. When the X-Man called Joseph sought them out, Scanner was among the first to be convinced that he was the true Magneto. She begged him to lead them. For a time, Joseph was conflicted and this led to him 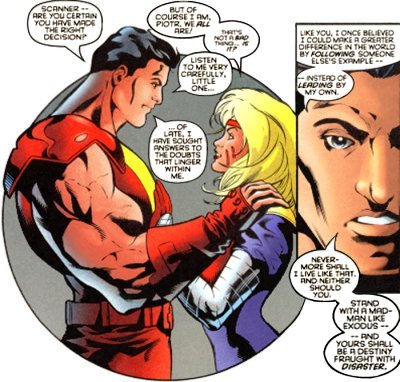 becoming embroiled in the power plays between Exodus and Fabian Cortez who both wanted to control the Acolytes. Though Joseph eventually left the Acolytes to their own devices,  he did help to reunite the two separate factions that had formed after the fall of Avalon. [Magneto #1-4]

As the Acolytes reunited, Scanner and Unuscione reached out to Colossus in the hopes that he would rejoin them. Piotr explained to Scanner that he had decided to follow his own path rather than to serve the dreams or ambitions of another. He warned her that following a madman like Exodus could lead her to disaster. Scanner seemed shaken by Piotr's words and uncertain if she was making the right choice in returning to the Acolytes. [Excalibur (1st series) #106]

Scanner remained with the Acolytes, who gathered under Exodus' leadership. But she was no longer the meek follower she once was. Having been exposed to other convictions and leadership styles, she was no longer intimidated by Exodus and Cortez and much more outspoken as a result. She even began to actively seek a leadership role among the Acolytes. When he launched a campaign against the impure genetic advancements of the High Evolutionary, Exodus chose Scanner over Cortez to lead a group of newly recruited Acolytes and a team of mutants he had gathered as an expendable strike force. This eclectic group of mutants all sought a cure for the Legacy Virus, something Exodus had promised them in exchange for their aid. Scanner tried to be decisive and confident as field leader but their plans were foiled by the intervention of Quicksilver. They failed to kill the High Evolutionary or secure the powerful Isotope E he used to enhance his power and that of his creations. Scanner ordered a retreat but abandoned the Acolytes' mutant allies, blaming the mission's failure on their incompetence and impurity. Pyro and the other infected mutants swore revenge against Scanner and the Acolytes. [Quicksilver #1, 8-9]

Despite this setback, the Acolytes continued their campaign against the Evolutionary. They were opposed by Quicksilver and his allies the Heroes for Hire, as well as the Knights of Wundagore. The tide of battle was turned when Quicksilver acquired Isotope E and bested Exodus in battle, proving himself the true heir to Magneto. Scanner and several other Acolytes joined him and helped to stop the High Evolutionary who had become drunk with power. When the battle was won, Pietro commanded the Acolytes to find their own way and leave him alone. [Quicksilver #11-12, Heroes for Hire & Quicksilver Annual '98]

Magneto resurfaced a short time later, having recovered his mind following the fall of Avalon. He secretly contacted Amelia Voght, who he charged with gathering the most loyal and worthy of his Acolytes. Scanner was among those who Amelia separated from Cortez's leadership and prepared to aid Magneto in his planned war against humanity. She joined the Acolytes in a series of public raids and attacks that soon escalated into a conflict with the X-Men. Several Acolytes questioned the necessity of their ongoing conflict with the X-Men and Scanner was the most outspoken among them. She asked why they couldn't disagree on their methods but still respect 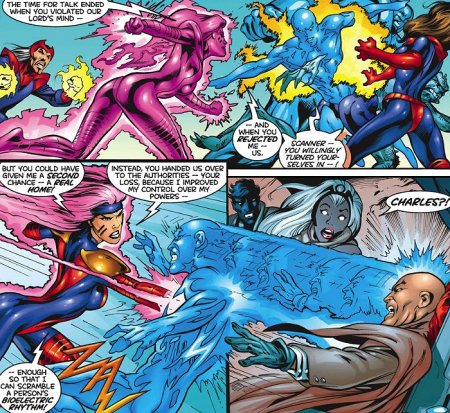 them, particularly in light of the way the X-Man Cyclops had aided them when Avalon was destroyed. Their debate was interrupted by the arrival of Professor Xavier's astral form.  Scanner lashed out at him, expressing her resentment over the way he erased Magneto's mind and denied her a home and better life with the X-Men after they returned with Cyclops. Her powers had grown to the point where she could physically disrupt Xavier's psi-form, to his great surprise. Xavier turned Scanner's conflicting feelings and those of her teammates against them, giving the X-Men the edge they needed to win the battle. [Magneto War]

Though his Acolytes lost their battle against the X-Men, Magneto won the war. Fearful of the dangers his magnetic powers posed to the world, the United Nations ceded control of the island nation Genosha to Magneto. Scanner was one of several loyal Acolytes who were given a special 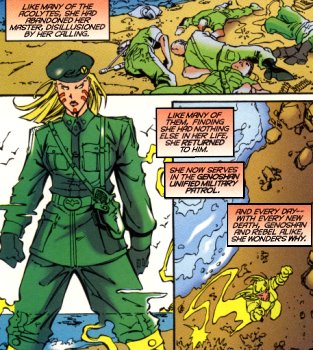 post in Genosha's new government.  Magneto planned to carve out a haven for mutantkind but all was not well in Genosha. The nation was under constant siege by rebellious factions, ravaged by the Legacy Virus, and hindered by the political machinations within Magneto's cabinet. In her role in the Genoshan militia, Scanner saw the resulting deaths up close and again began to question Magneto's methods.

Magneto's rule proved to be both tumultuous and brief. His plan to incite a war against humanity was thwarted and he was nearly killed by Wolverine. While recuperating, Genosha was nearly wiped off the map by a massive Sentinel attack launched by Cassandra Nova. Millions died that day and Scanner was one of the few lucky ones who escaped with her life.

She was not so lucky on M-Day. Intelligence gathered after the Scarlet Witch de-powered millions of mutants revealed that Scanner was one of the many who were stripped of their mutant abilities. Perhaps as a mere human, she will find the purpose and home that she could not find as a mutant. [Magneto: Dark Seduction #1-3, New Avengers (1st series) #18]