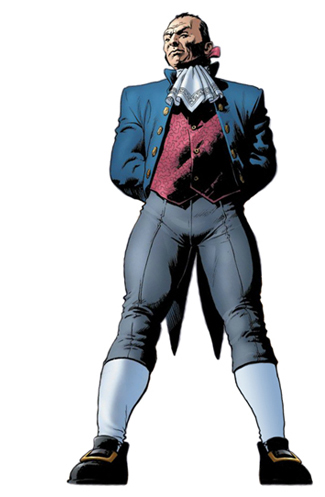 "In truth, I have often laughed at the weaklings who think themselves good because their claws are blunt."
- Friedrich Nietzsche, Thus Spoke Zarathustra

When he served as the Black King of the Hellfire Club's prestigious Inner Circle, the task of initiating new members rested on the shoulders of Sebastian Hiram Shaw. It was through this role that Shaw had the opportunity to educate new members about the rich history of the club and the meaning of some of their more esoteric rituals. While he was prepping Emmanuel da Costa for his initiation into the Inner Circle, da Costa scoffed at the prospect of having to wear the outdated, colonial attire favored by the club's members. Shaw used this as an opportunity to explain to him the significance of their clothes:

"Our costumes signify our abandonment of the modern age—with its cloying ethics and bourgeois mercantile principles, where society is bent on protecting people from themselves at any cost—for a far simpler one—where a man was limited solely by the scope of his imagination, his ambition, his daring and bound only by his own personal sense of honor. Society—the common herd—means nothing," he told Emmanuel, "the individual all." [New Mutants (1st series) #22]

Shaw clearly longed for an earlier time in the United States, when industrial titans like J.D. Rockefeller and Andrew Carnegie reigned supreme. If we are to take Shaw at his word, all he wanted was to pursue his personal goal of productive achievement, free from the interference of society and the government, and to use the wealth his activities created, and the power it conferred, for his own ends—namely, to protect himself from those who would destroy him. This was certainly aligned with the stated motto of the Hellfire Club: "do as thou wilt but harm none."

If Shaw had left it at that, he never would have had any conflict with the X-Men, as they would not have taken any interest in his affairs. However, Shaw failed to live up to even his own ideals. His dreams of wealth and power drove him to try to seize control of the mutant gene and those who bore it. His stated rejection of mercantile principles apparently didn't conflict with his pursuit of exclusive, monopolistic contracts with the U.S. government—the very government he didn't want meddling in his own affairs. His belief in power as a tool for self-defense devolved into him financing weapons of mass destruction used for the sole purpose of capturing and killing fellow mutants. Shaw's ambitions, while noble, often failed the basic test of not aligning with the reality of his actions. It was this misalignment that brought him into conflict with the X-Men time and time again.