In the 39th century, the High Lord known as En Sabah Nuhr conquered most of the Earth after the Hundred Year War in the name of his Canaanite people. Although En Sabah Nuhr was destroyed in battle with Clan Dayspring, most of his empire remained under the control of his followers, the High Lords of New Canaan. The man who would become Sinsear was a soldier in the New 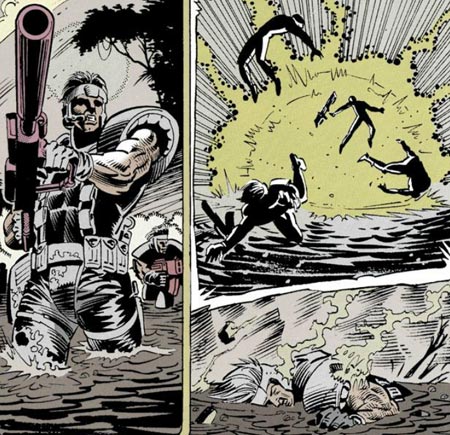 Canaanite army.  His platoon was patrolling a contested region between the New Canaanite and Pan-African Alliance territories when PanAf troopers popped a thermite bomb, killing Sinsear's unit. As the only "survivor" of his platoon, Sinsear suffered radiation burns over 70% of his body, internal bleeding and skeletal fragmentation, leaving him to die slowly in the swamplands instead of quickly like his brothers.

By chance, Nathan Dayspring, Tetherblood and Boak of the third faction Clan Chosen bodyslid into the region to check on the explosion. Boak detected Sinsear's dwindling lifesigns, and Tetherblood was prepared to mercy-kill the soldier and end his suffering. Dayspring stopped his clanmate from shooting the injured man, and instead had them send up a distress beacon to the Canaanites before bodysliding out of the disputed zone. 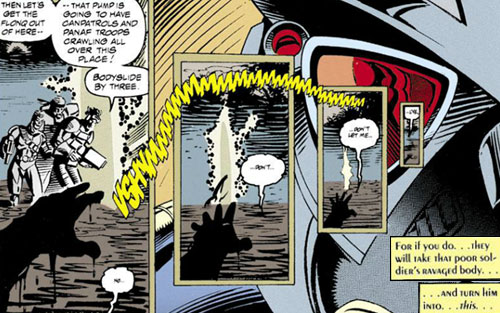 As they left, none of them apparently heard the soldier weakly begging them to come back and execute him before the Canaanites arrived. The man who would become Sinsear knew, even if the Clan Chosen did not, that the Canaanites would not treat him as a patient, but as an opportunity. Under the direction of ruling General Parridan Haight, the soldier was cybernetically rebuilt into a gruesome living weapon codenamed Sinsear, programmed to serve as a one-man army on behalf of the Canaanite forces. As he carried out his compulsory service as a killing machine in Haight's employ, racking up a kill-count of nearly a million victims, Sinsear obsessively blamed Nathan Dayspring for not killing him when he had the chance, and letting the Canaanites turn him into a machine. Sinsear felt like his humanity had been stripped from him, and wallowed in his new, soulless existence. [Cable (1st series) #5]

The Canaanite hierarchy was dependent on Apocalypse's rise to power to establish their empire. When they learned that Cable traveled back in time to prevent the ascension, an agent codenamed "The Other" was sent back via their Time Displacement Nexus to deter Cable's efforts. The Other broke contact and went rogue, however, leading General Haight to send Sinsear back via the TiNex to eliminate the Other and ensure the High Lord Ascension. Sinsear welcomed the mission once Haight not only gave him operational discretion to kill Cable, if the chance arose, but also revealed that the Other was really Cable's son, Tyler Dayspring. [Cable (1st series) #1] 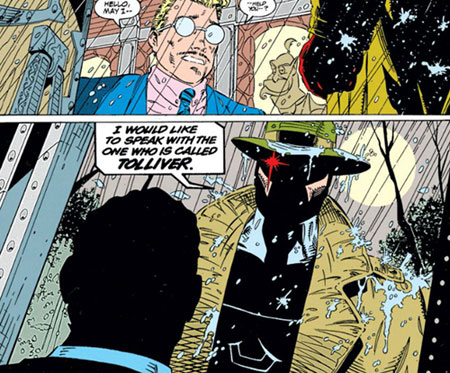 Eager to exact his misguided revenge against Dayspring either in person or through his son, Sinsear used the TiNex to transport his Master Terminal deep underwater in the South Pacific. Using its teleportation relays, he attempted to pick up the Other's trail. Tyler Dayspring had adopted a local identity as the arms dealer "Mr. Tolliver," but faked his death several weeks before Sinsear's arrival, leaving the trail cold. [Cable (1st series) #2] Sinsear attempted to make contact with Tolliver's former top operative Deadpool in Sarajevo, but instead ran across a series of mercenaries fighting over the elusive "prize" hinted at from Tolliver's will. [Cable (1st series) #3] 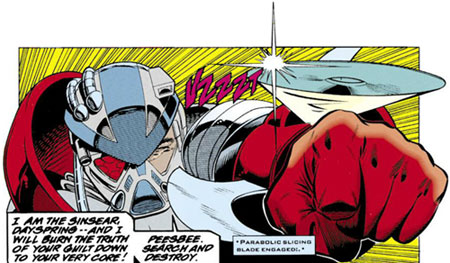 Changing tactics, Sinsear monitored transmissions with the Master Terminal's communication suite until he zeroed in on Cable's present location. [Cable (1st series) #4] With authorization from his cross-temporal masters, Sinsear prepared to revenge himself against Nathan Dayspring in order to draw out Tyler. Catching Cable off-guard at X-Force's Camp Verde base, Sinsear teleported his quarry to the Master Terminal. He forced Cable to run the gauntlet in a battle arena controlled by his own cybernetic systems, playing with his enemy while screaming about the losses he suffered after being made over by Haight. Sinsear used damp-cords to temporarily inhibit Dayspring's cybernetics, but Cable turned the tables on the assassin by blowing up one of his control panels, sending feedback into Sinsear's own armor. Pressing his advantage, Cable physically beat down Sinsear while forcing him to confront his own responsibility for what he had become. He insisted that replacing flesh with metal wasn't what made Sinsear a machine... it was following orders and killing without question that made him one. Whether or not Sinsear got the message, he chose to flee the battle that day, while leaving behind some information Cable could use to find his son. [Cable (1st series) #5]

Months later, Sinsear resurfaced at the sunken location of Cable's own Time Displacement Core, previously jettisoned from the Greymalkin space station. Apparently cut off from his own connection to the future, Sinsear intended to use the TDC to return to his own timeline. He hoped to find some technology in the future that could reverse his cybernetic transformation, and restore his humanity in the process. He accidentally tripped an alarm, though, which brought Cable and Bishop to investigate the TDC. Although he had sworn off revenge after their last encounter, Sinsear had no qualms about trying to kill Cable for getting in his way now. 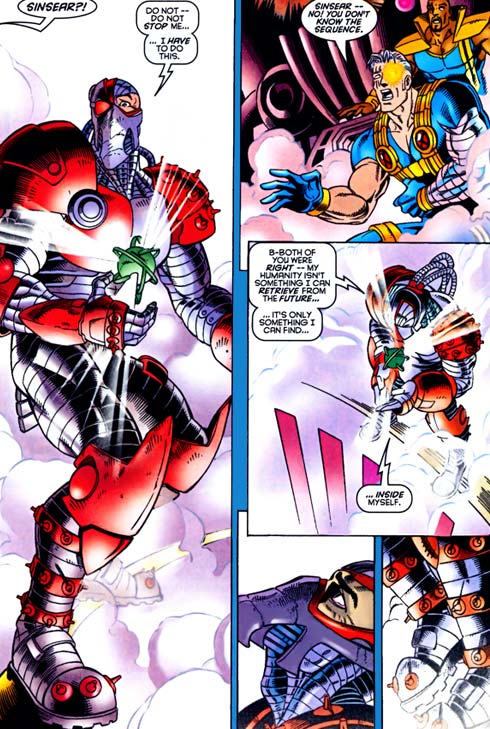 Unfortunately, the battle that followed damaged the Core, cycling up a chronal chain reaction that threatened all of causality. In order to stop it, the rift matrix orb had to be set off inside the Core's chamber, causing the time-rip to fold over on itself and neutralize the rift. After sending Bishop off on a fool's errand to trick him into getting to a safe distance, Dayspring intended to sacrifice himself by entering the rift with the orb. At the last moment, Sinsear shot Cable in the back and recovered the orb, taking it into the rift himself. As he passed beyond the rift, Sinsear remarked that he finally understood what Cable tried to tell him in their last encounter—his humanity was not found in flesh and bone, but in his spirit. By sacrificing himself, his final act would be the act of a man, not of a machine. Once he set off the orb inside the rift, Sinsear's atoms were scattered throughout the timestream, stabilizing the continuum while giving him the ending he desired. [Cable (1st series) #41]