formerly Omega Flight I,
Gamma Flight I, the Flight

Alexander Thorne was gifted with a genius level intellect – exacerbated by an obnoxious attitude. In circumstances undetailed, he came to the attention of James MacDonald Hudson in the formative months of setting up Department H, the organization that would oversee Canada's own super hero team. 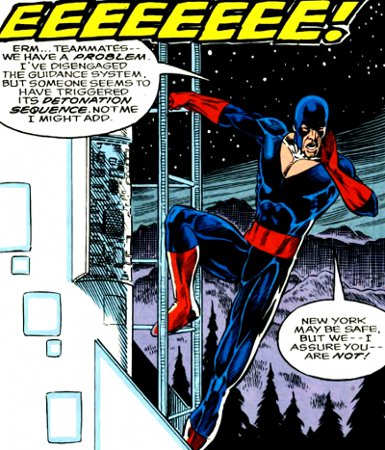 As one of the earliest recruits into Department H, Alec was a founding member of the initial team, the Flight, working alongside such heroes as Wolverine, Snowbird and Groundhog. The latter of these, Groundhog, had the misfortune of being assigned to be Alec's roommate – misfortune because Alec would talk incessantly in his sleep about all sorts of rare facts. Alec's arrogance extended to boasting that he was the smartest man in the world, resentful that Reed Richards received all the press.

As a member of the Flight, Alec took the name Smart Alec and participated in the disastrous mission against Egghead and his Emissaries of Evil. In his arrogance, Smart Alec boasted that he could disarm a deadly bomb but, when put under pressure, he folded and the bomb was absorbed by another member of the Flight, killing him in the process. [Alpha Flight Special (2nd series) #1]

In the wake of the first Flight mission, James Hudson and Department H developed a three-tier training system for the super heroes within Department H. Raw recruits would begin in Gamma Flight, before progressing to the more experienced Beta Flight and, finally, part of Canada's premiere super hero team, Alpha Flight. Smart Alec was placed in Gamma Flight – his arrogance and the fact that he buckled under pressure were central reasons that he required additional training. Smart Alec was disliked by the other heroes in the early years of Department H and, despite working together on the First Flight mission, Wolverine passed over Alec when a squad of heroes were being selected for a mission. [Wolverine First Class #5] 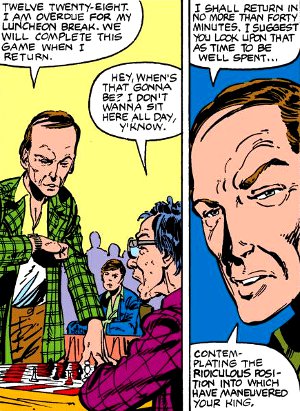 However, just as Alpha Flight were establishing themselves as true and just heroes, and Department H had several recruits moving up in Beta and Gamma Flight programs, the Canadian government cut the funding to Department H and the raw recruits of Gamma and Beta Flights were cut loose without so much as a thank you. [Alpha Flight (1st series) #1]

With no career aspirations, Alec used his superior intellect to swindle others out of their own money by taking part in a chess competition at the Southbrook Mall in Winnipeg, Manitoba. He challenged nine people at a time and was, as usual, arrogant and rude to them, wondering aloud why he was wasting time with them. His pitiful existence changed one fateful day when he was approached by a mysterious woman called Delphine Courtney, who had a proposal for him. [Alpha Flight (1st series) #7]

Alec traveled to New York City, where he was reunited with his former Gamma Flight teammates and two members of Beta Flight, all assembled by Delphine Courtney under the instruction of Jerry Jaxon, a man who hated James MacDonald Hudson and sought revenge. Jaxon thought that assembling the disgruntled Gamma and Beta Flight recruits into his own team would assist him in getting his revenge on Hudson, now known as the hero Guardian. Alec and the others were unaware that Delphine Courtney had planted a device which exacerbated their insecurities. Diamond Lil in particular had nothing nice to say about Alec, but the squabbling group settled down enough to meet Jerry Jaxon and learn of his plan to annihilate Guardian. Given a pink and orange costume with a large, “ecephalo” helmet that enabled him to compute additional data, Smart Alec officially joined the team to take down Guardian – Omega Flight.

With the team assembled, Jaxon created an elaborate ruse to summon McDonald and his wife Heather to New York, at which point Jaxson revealed himself to his foe. Worried for his wife, Guardian sought to rescue his now missing wife, but was confronted by Smart Alec and the rest of Omega Flight. [Alpha Flight (1st series) #11]

Omega Flight’s advantage did not last long, as Alpha Flight soon arrived in New York and gave aid to their leader. During the battle, Smart Alec took Shaman by surprise and stole his medicine pouch. 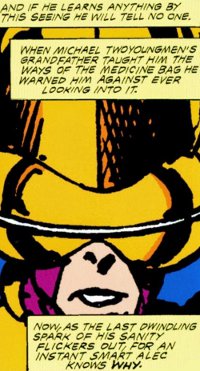 Compulsively curious about wanting to know what was kept inside, Smart Alec boasted about the capabilities of his ecephalo helmet and declared that he would learn the secrets of the medicine pouch for Omega Flight. Shaman warned Thorne not to look inside, but he ignored the hero and did so anyway. What he saw inside was beyond the comprehension of mortal man and, in an instant, Smart Alec’s sanity vanished. [Alpha Flight (1st series) #12]

In the aftermath of the battle, in which Guardian was killed, Smart Alec's body was shrunk down to six inches by Shaman and stored within his medicine pouch until Shaman could find a way to restore Alec's sanity. Although this made Alpha Flight's Puck uneasy, Shaman believed it was the best thing for Alec. [Alpha Flight (1st series) #13] When Omega Flight struck again and learned what had happened to their former teammate, Delphine Courtney stole Shaman's pouch and turned it inside out, attempting to find Smart Alec. Though she didn't find him, upending the portal to the dimension within did a lot of chaos for Alpha Flight. [Alpha Flight (1st series) #27]

In the months that followed, Shaman gained new powers and thus abandoned his medicine pouch, which was kept in storage inside Mansion Alpha on Tamarind Island. One day, Smart Alec's tiny body crawled out of the pouch and, during the nighttime, startled Heather Hudson. Still holding Omega Flight responsible for her late husband's death, Heather tried to capture Smart Alec. However, a battle soon erupted and it was revealed that former Alpha Flight member Sasquatch, whose mind had recently been left to wander the Crossroads of Realities, had found Smart Alec's lifeless body in the void and took it for himself. During the battle against Alpha Flight's enemy, Pestilence, Sasquatch was able to transfer his consciousness from Smart Alec's body into that of the empty Box unit. Though this was lucky for Sasquatch, it was not so lucky for Smart Alec, whose body was crushed during the battle. [Alpha Flight (1st series) #44-45]

In the years that have passed since Smart Alec lost his mind and then his body, Shaman has not made an attempt to recover the arrogant Smart Alec's mind from his medicine pouch. However, without a body to house the brilliant mind of Alec Thorne, would there be any point?