In the warped reality of House of M, the Stepford Cuckoos were students in the New Mutants Leadership Program, which trained young mutants to become the influential leaders of tomorrow. 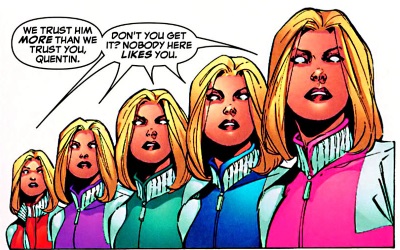 They were at odds with the Hellions, a similar group of students training to become the Red Guard, an elite group of mutant soldiers. The New Mutants ended up coming to the aid of Surge, one of the Hellions, when it was revealed her father was a human terrorist. Despite her sister’s objections, Sophie Cuckoo decided to help out her other teammates by joining them in their crusade to help Surge’s father. Travelling to Japan, they investigated a secret project that was experimenting on humans to turn them into mutants. Things took a tragic turn when one of the New Mutants was revealed to be a spy and she turned the various members against each other using her powers. Sophie managed to calm down everyone with her telepathy but she was shot and killed by one of the human terrorists Donald Pierce.

In the world set 150 years in the future after the events of Magneto’s terrorist attack on New York, the Stepford Cuckoos had barely aged a day. Celeste, Phoebe and Mindee called themselves the Three-in-One and most likely owed their longevity to nano-technology that 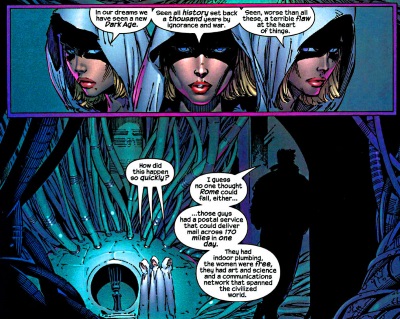 ran through their body. Corrupted by the bacteria Sublime, Beast had turned evil and started a chain of events that had left much of the world destroyed. Using cloning techniques, he had created his own race of beings that had essentially caused evolution to grind to a halt. To make matters worse, Beast had gotten hold of the Phoenix Egg, and with that power he would surely destroy what was left of humanity. The Cuckoos spent much of their time using their powers to look into the future and the likely scenarios that would unfold. When the rag-tag team of X-Men went to confront Beast, the Cuckoos stayed behind in Cerebro to monitor the situation and provide intel. However, when Beast’s forces stormed the Institute, the girls initiated a self-destruct program that destroyed their base, killing them but denying Beast the opportunity to use their DNA.

In the reality seen in Exiles Days of Then and Now, the Hulk had been blasted off into space where he took control of the annihilation wave and killed most of Earth’s heroes with it. A small 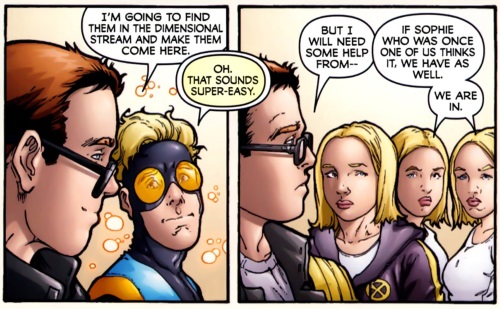 group of teenage heroes remained, with Sophie, Mindee and Esme being among them. As well as being in a relationship with Quentin Quire, Sophie now operated separately from her sisters as she had developed the ability to see the future in her dreams. One such dream indicated to Sophie that a group of heroes that could help them were bouncing around the multiverse. Modifying Cerebro, Sophie and Wiccan combined their abilities to open a portal to send Quentin to fetch help. Whilst Quentin bounced around various worlds looking for the heroes, the Cuckoos and the rest of their team fought off the creatures of the annihilation wave. Quentin returned just in time with some heroes, saving the teens and starting a rebellion that would eventually free Earth.

In the Battleworld domain of Mutopia, Xavier had been killed trying to destroy Cassandra Nova and Magneto had taken over the Institute. He personally trained the younger generation of mutants, including the Stepford Cuckoos, to believe that humans and mutants would never co-exist peacefully. Somehow, he got hold of a Phoenix Egg and kept it hidden from everyone else, except for Esme. Seeing himself as its father and deciding that the entity inside would need a 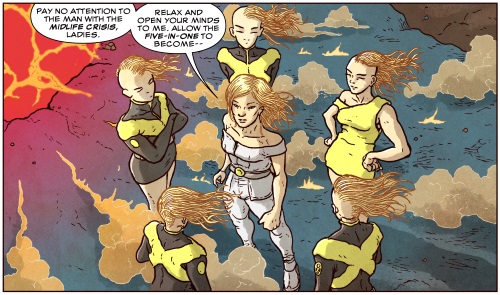 mother, Magneto convinced Esme that she was going to be it and the two entered into a relationship. What the Cuckoos didn’t realize was that Quentin Quire, one of their teammates, was a spy for some former X-Men. Overpowering the Cuckoos, he learned about the Phoenix Egg and warned his true teammates. The X-Men stormed the Institute just in time to help against another attack by an army of Beasts, led by Sublime. Siding with the lesser of two evils, the Cuckoos joined forces with Emma Frost to become the Six-in-One and telepathically shut down the minds of the Beasts, but not before one of them killed Esme. Unfortunately, the Phoenix Egg hatched and the group discovered that it had been corrupted by Cassandra Nova. Taking control of the Cuckoos, she had them attack the X-Men, before the Phoenix was eventually defeated once more.

In the future that depicted The End of the X-Men, Mindee, Celeste and Phoebe went by the name The Spikes and, much like their main universe counterparts, differentiated themselves by their hair style. Working alongside Martha Johansson, the girls were instrumental in coordinating the activities of the various x-teams around the world. They survived a catostrophic attack on the school that saw many of their fellow teammates killed and they assisted in the subsequent assault on Cassandra Nova.