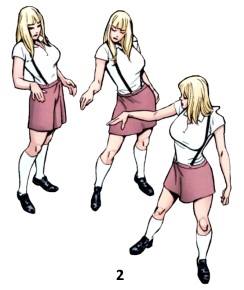 1) When the Cuckoos were put into the Corsair’s training squad they received uniforms that matched their teammates. The costume consisted of a full-length body suit that had dark-blue and white paneling on it. The girls rarely wore this though as they did not participate in field exercises to the extent their teammates did. They had a variation on this look that helped individualize the girls, where instead of blue one girl wore red and another green. [Academy X: yearbook special]

2) Whilst not really a uniform, the girls most iconic and frequently used costume is their school uniform. The look underwent minor alterations over the years but the general theme consists of a white shirt, tie, mini-skirt and white socks pulled up high.

-) Whilst on Utopia, the girls adopted the X-Men students signature black and yellow uniform, but they rarely wore it. Instead they opted for their school uniform look. 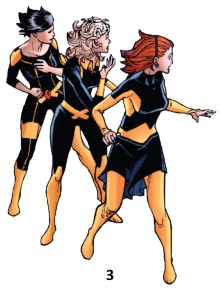 3) When aiding Cyclops in his fight against the Inhumans, the girls wore individually designed costumes that were all black and yellow. Irma’s was a skin-tight suit that had yellow shoulders and piping running down the front of the body. Phoebe opted for a functional dress that stopped just above the knee, with yellow tights underneath. Celeste went for a slightly plainer look, keeping the yellow to just her shins and a flared collar. All three had a yellow belt of varying designs, with Irma’s having a red buckle. [Death of X #1]