When Jodi Furman reached puberty, she developed the mutant ability to control small pieces of

metal with utmost skill. Despite this not being the flashiest,  most useful or even powerful ability, Jodi knew she was different, and withdrew into herself, stopped talking, and made little or no reaction to her surroundings. She was identified as “Ego-phobic”, meaning she was scared of herself and her powers. Somehow, Jodi came to the attention of James MacDonald Hudson when he was setting up Department H, and was inducted into the team known as the Flight. [Alpha Flight Special (2nd series) #1]

During a training session, Stitch was attacked by fellow Department H trainee Wild Child, who tore up her face in three places. [Alpha Flight (1st series) #127] Apparently Stitch would not let a doctor near her and sewed her own face back together with the needle she has attached to her costume. It was reported that Stitch became quite hostile to those around her and retreated to a barn spending her time there.

One must call into question James MacDonald Hudson’s reasons for involving the mentally unstable Jodi with the Flight program. Was he so determined to make his dream of a Canadian super hero team happen that he was willing to recruit anyone with a power, despite their stability? Or did he genuinely think that having Stitch involved with other super beings would help her? 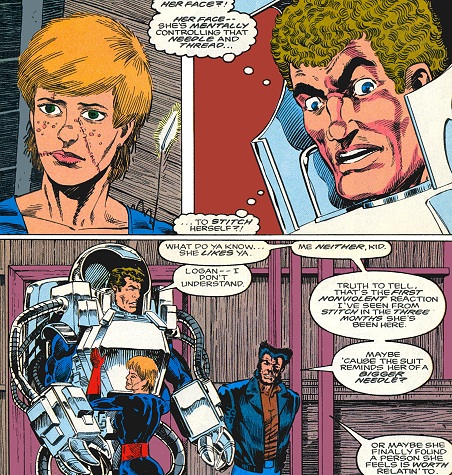 When Groundhog joined the Flight three months later, Jodi made a surprise move by hugging the new recruit, whose armor apparently reminded her of a big needle. Before long, The Flight embarked on a mission to defeat the American terrorist Egghead and his accomplices. Despite her lack of training, Stitch participated in the mission and battled the Swordsman – keeping him at bay by sewing her needle through his glove, leaving him unable to control his sword. [Alpha Flight Special (2nd series) #1]

The “First Flight” mission is generally considered a failure as it resulted in the death of the group’s most powerful member, Saint Elmo, while Groundhog quit immediately after. However, it did pave the way for Department H’s future and the Alpha / Beta / Gamma Flight teams. Jodi was still involved with Department H as it began to expand, [Wolverine First Class #5] but her ultimate fate remains unknown.

It is possible Stitch quit due to the departure of Groundhog – as she may have become even more unstable after he resigned. Her leaving might not even have been her own choice. With more and more recruits being inducted into the Flight program with more useful powers than hers, Jodi probably was no longer seen as a viable option. Another possibility is that she was killed on an early mission. If Jodi is still alive, her power status following M-Day, during which 90-95% of Earth’s mutants lost their powers, is equally uncertain.