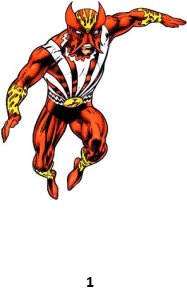 1) Sunfire’s first costume was reminiscent both of the rising sun motive of the Japanese flag and of the fire that is his namesake. It was a predominantly red, skintight suit, with white vertical stripes on his torso and a yellow flames motif around his ankles and wrists. The real eyecatcher was his helmet, which covered most of his face above his mouth. Red with a flame motive and sort of butterfly-shaped, it enhanced the fierce look of a warrior. There are two slightly different versions of this outfit, one of them has the white stripes on his torso strictly vertical, on the other suit they all meet in Sunfire’s belt buckle. [X-Men (1st series) #64]

2) Sunfire’s second costume was far more generic. A skintight, red bodysuit with metal shoulderpads, wristlets and short boots. In addition, he no longer wore a mask and had let his hair grow out, which he wore in a long ponytail. The shoulderpads and wristlets contained special equipment to amplify his powers and to focus his plasma blasts. When his powers grew out of control, Shiro had to stop wearing this amplifying suit. [Uncanny X-Men (1st series) #284]

3) In many ways, Shiro’s third look adopted parts of both his previous looks. A red, skintight suit again, with horizontal and diagonal golden stripes on his chest approximating the rising sun motif. A circular emblem can be found on his chest, in the center of those stripes, and on both of his shoulders. A yellow belt and several more yellow stripes around ankles, thighs, wrists and upper arms complete the look. Again, he wore no mask, but had returned to his short-haired look. [Wolverine Annual ‘96] 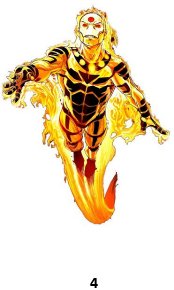 --) After the Zero fluid was removed from his body, Shiro returned to wearing his classic costume, still alternating between the two slightly different versions. [X-Men (2nd series) #93]

4) After becoming a Horseman of Apocalypse, Sunfire adopted a costume resembling the one worn by his doppelganger from the Age of Apocalypse. His body glowed with orange flame from nearly every inch, as plates of black armor selectively covered portions of his skin. A spiked black collar circled his upper chest, and his face was covered by a stylized mask representing Japan, a red dot on a white background. [X-Men (2nd series) #183]

--) Sunfire returned to his original uniform since breaking free of Apocalypse's influence and joining the Avengers. [Uncanny Avengers (1st series) #5]

--) After absorbing the power of the Celestial Executioner, Sunfire was reduced to a state of pure energy. He began wearing a containment suit to provide his body humanoid shape and substance, basing the suit on the design he previously used as a Horseman. After regaining his solid form under unrevealed circumstances, Shiro once again returned to his classic costume.