Born in St. Louis, Missouri, Everett Thomas grew up in a stable and nurturing home. His parents were both successful professionals and, in addition to their biological son Everett, also acted as foster parents to several other young children who needed a home. His parents' influence and the multi-ethnic background of his brothers and sisters helped Everett grow into a mature and tolerant young man. He was a straight A student looking to major in political science when he graduated, and spent so much of his free time at school that he was on a first name basis with Giovanni, the janitor. [Generation X (1st series) #15-16] 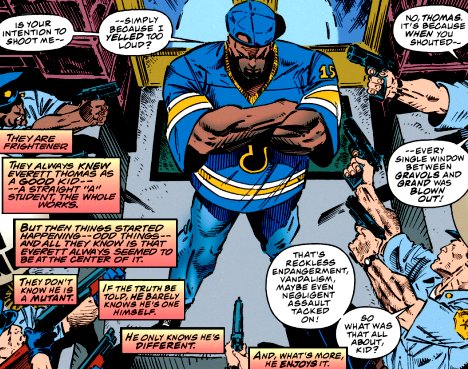 As his nascent mutant powers developed, however, Everett found himself a target for the techno-organic mutant hunters known as the Phalanx. Banshee and the White Queen came to his aid, as representatives of the Xavier Institute, but it was Everett himself who secured a temporary victory against the Phalanx by tapping into the full potential of his fellow young mutant, Jubilee, and detonating the T-O drones at a sub-atomic level. As the White Queen followed the faint psychic signature of one of the captured new mutants, Everett and the rag-tag band made their way to California and managed to destroy the Phalanx Harvester, but at the cost of one of the neo-mutants' lives. [Phalanx Covenant] 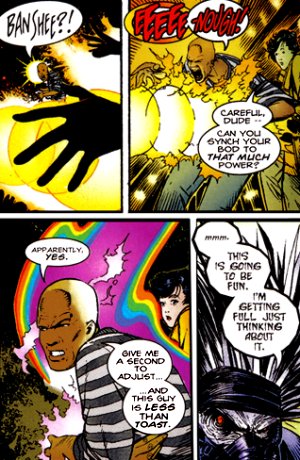 In the days that followed, the White Queen's old academy in Snow Valley, Massachusetts was reopened under the title Xavier's School for Gifted Youngsters. Everett joined his fellow neo-mutants in enrolling as the first class under Banshee and Frost's tutelage, Generation X. He adopted "Synch" as his personal codename, after the synchronistic aura which allowed him to tap into other mutants' abilities. Within days of opening, Synch and the other students had already fended off the marrow-vampire Emplate when he attacked their new recruit Chamber, and defended themselves against another incoming student, the laconic and mysterious Penance. [Generation X (1st series) #1-3]

During Christmas, the team inadvertently got involved in a hostage crisis when a deformed boy named Eliot, apparently a mutant, held a teacher and a group of students in the school against their will after he was rejected from enrollment. As Generation X attempted to prevent any loss of life between the scared policemen and the desperate child, events became even tenser when the child-like assassin known as Orphan-Maker arrived in order to kill Eliot's parents and kidnap the boy for his employer, Nanny. Generation X drove off the Orphan-Maker, but the stand-off ended in tragedy as the teacher, the only man who stood up for Eliot's entry into public school, died of a heart attack brought on by the stress. What's worse, Everett's power informed them that Eliot did not possess the X-gene... his appearance was simply a deformity, and not a mutant manifestation. [Generation X (1st series) #4]

On a trip to New York to pick up some new students, Synch and the others ran afoul of the mutant terrorists known as Gene Nation. Being second generation Morlocks, the Nationals were particularly interested in getting a hold of one of their "ancestors," Leech, whom the White Queen was meeting at her Manhattan offices. While their leader Marrow made off with Leech and Ms. Frost, Hemingway stayed behind to confront Generation X. Synch, Skin and Jubilee were 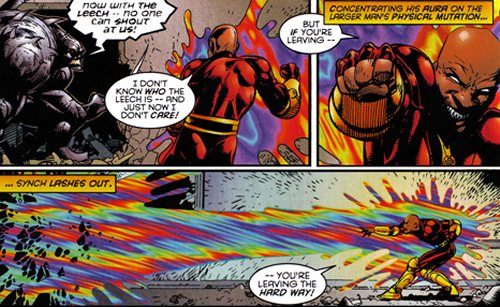 shocked when they arrived at Frost Enterprises to find several employees massacred and Hemingway waiting for them. They engaged him in battle and finally won when Everett synched to Hemingway's massive physical mutation. Turning his aura into a battering ram of pure force, Everett knocked the National down 30 stories, where he retreated into the Morlock Tunnels. With the help of Leech's friend Artie and Synch's own tracking aura, they managed to locate Gene Nation and helped Emma Frost and Leech escape from them unmolested. [Generation X (1st series) #5-6]

In time, Generation X had another encounter with the creature known as Emplate, only to surprisingly discover that he was M's brother. [Generation X (1st series) #12-14] Though he was 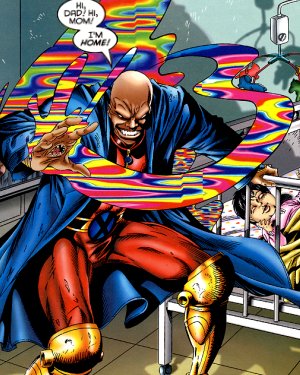 eventually driven off, Emplate left the students a parting gift by mutating Everett into a marrow-vampire like himself. He then dropped Synch off in St. Louis, mind-warped into seeking out and supping off of his own family's marrow. Breaking into his family home, Everett almost leeched from his baby sister before his parents confronted him. They managed to shock him back to normal, and Synch fled before his temporary sanity left him again. He tried to regain his composure at his old high school, but slipped and was ready to attack and feed on his janitor friend Giovanni when Generation X stepped in to stop him. Because they were trying their best not to hurt him, Synch was able to fight Husk and Jubilee to a standstill until M confronted Everett and forced him to fully synchronize himself with her powers, a process which mysteriously eradicated all traces of Emplate's influence from his mind and body. [Generation X (1st series) #15-16]

Everett recovered from his ordeal and, despite the Onslaught affair raising public mistrust of mutants higher than ever, things were relatively quiet at the academy for a number of months. He and Jubilee, his best friend since Generation X first formed, began to grow slowly closer to one another, and to the possibility of a relationship. Their progress was cut short, however, by the arrival of Black Tom Cassidy at the school. While Jubilee was kidnapped by the mutant-hating Bastion as part of his Operation: Zero Tolerance scheme, Synch and the rest of Generation X were cast out into the middle of the ocean as the maniacal Tom's revenge for Banshee "stealing" his adopted daughter Theresa away from him years ago. [Generation X #25] While Banshee and Penance managed to defeat Black Tom back at the academy, this unfortunately caused the plant-matter in Generation X's life raft to break apart, as it was no longer being sustained by Tom's powers. Synch and the others only survived through the freak intervention of Glorian, the apprentice Shaper of Worlds, who transported them all to safety in Skin's old neighborhood of Los Angeles, California. [Generation X (1st series) #26-28]

They tried to ask Angelo's old flame Tores for help getting back east, but ended up in a running battle with the Prime Sentinels, sent after them by Operation: Zero Tolerance, which had just recently been granted official sanction to hunt down mutants as they saw fit. Hiding out in a garage, Everett confessed to Monet that he was afraid he would die before getting a chance to accomplish everything he planned on doing with his life. He wanted to visit Paris, meet his idol the Black Panther... but mostly at that moment he wanted to have kissed a girl.  Rather 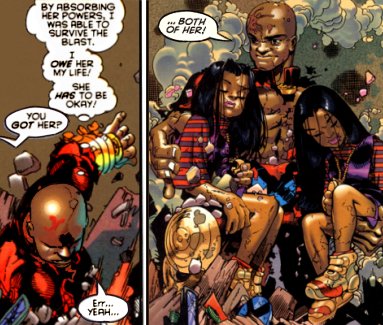 uncharacteristically, Monet acquiesced and planted a big wet one on Synch just before the Sentinels invaded the garage. During the battle, Everett was injured and synchronized with Monet's invulnerability to save himself. For some reason, synching with her this time opened up her secret to him, allowing Everett to recognize her as two separate children inhabiting the same body. After a massive explosion leveled the garage and ended the fight, Synch was the first to emerge and used his aura to lock onto "Monet" and pull her to safety. Surprisingly, she had split into her true form: that of the eight year old twins Nicole and Claudette. [Generation X (1st series) #29-31]

With OZT taken out of commission by SHIELD, the students were free to return to Massachusetts and the twins were placed under medical supervision, having fallen into a comatose state ever since Synch pulled them from the wreckage. Everett blamed himself for their condition, worrying that his power interacting with "Monet" was the reason for her current state. Events took a sudden turn when the twins' brother, Emplate, invaded the mansion with his new allies, Chimera and the plasma-wraiths. While attempting to kidnap the girls, the twins awakened and merged first with each other and then with Emplate himself, creating a new amalgamated entity known as M-Plate. [Generation X (1st series) #33-34]

Possessing powers and goals different from all its separate parts, M-Plate kidnapped Everett and fled the mansion with Emplate's cohorts. The new gestalt St. Croix had conceived of a plan to use a conceptual device known as the Universal Amalgamator to crunch all consciousness in the multiverse into a single amalgamated mind. Travelling to the Citadel of the Universal 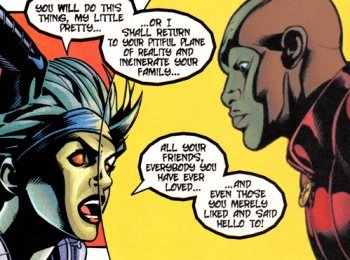 Amalgamator, s/he introduced Synch to Gaia, a mutant from another galaxy who had been chained to the citadel for all eternity, for only her power could be used to activate the Amalgamator. Gaia was dedicated to her task and refused to ever activate the device, but M-Plate planned to force Everett to synch with her powers and start up the device instead. Synch managed to hold out against M-Plate's threats long enough for the rest of Generation X to track them down to the citadel. The team had allied themselves with an ectoplasmic parasite named Dirt Nap, who absorbed and expelled M-Plate back into the separate siblings' bodies. [Generation X (1st series) #35-38]

The conflict had destabilized the entire citadel, though, and its reality began to collapse around the heroes. Emplate escaped through a dimension warp, but Everett refused to leave without first unchaining Gaia from the slab that held her to the citadel. He and Penance bailed out of Generation X's transport home at the last moment, and were stuck in the citadel's reality with Gaia. After Penance cut her free, though, Gaia showed them a separate exit through a warp chamber that led back to Snow Valley, Massachusetts. The young mutants materialized back through an innocuous store room in the back of one of Landau, Luckman & Lake's private offices. As Gaia ran off, giddy with the thrill of finally being free and Penance took off after her, Everett was held up by two local delinquents named Dorian and Weasel. They had been forced into community service work and had just spent the last three hours cleaning the store when Synch and the others crashed in. Already having had a few run-ins with Xavier's students in town, the two punks beat Everett severely, then stuffed him in their car and dumped him by the side of the road. [Generation X (1st series) #39] 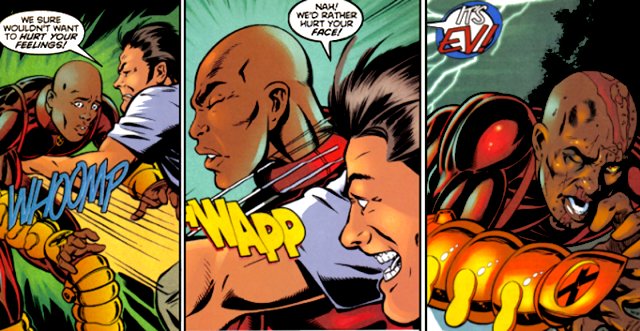 Banshee managed to find Everett and get him to the hospital, but the boy lapsed into a coma. He only awakened after a few days, when his power synched with several different Generation X members who visited him, somehow repairing the swelling in his brain. When Chief Authier brought the hoodlums to the hospital for Everett to identify them as his attackers, he calmly refused and claimed they had nothing to do with it. His friends were worried that Synch was planning to take revenge on them personally, but he surprised them all by instead making peace with Dorian and Weasel, even offering them his savings to help pay for repairs for their car, which was crushed by a spaceship visiting the mansion. He told Jubilee afterwards that hatred is a cycle, and that someone needed to make a gesture to break it before it got out of hand. [Generation X (1st series) #40]