When a son was born to Brad Carter and his wife, little did they suspect that the repeated small doses of nuclear radiation that Brad had been  exposed to in his line of work as an atomic

scientist would cause their boy, Tad, to grow up a mutant. At first there were no apparent signs of his genetic status but, when Tad was twelve years old, he manifested a telekinetic ability for the first time. A few years later, in school, Tad began to realize that he could pick the teacher’s brain for the answers to test questions he couldn’t answer himself.

Tad Carter further honed his psionic gifts during his college years and, although he occasionally read other people’s minds, he meant them no harm. In fact, he considered his powers a blessing that he wanted to share with others, believing he could somehow teach ordinary humans to 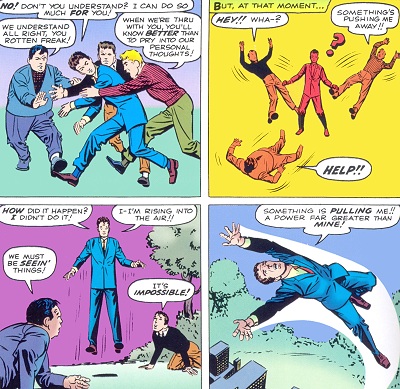 perform the same incredible things he could do.  However, Tad’s fellow students were not as open-minded as he believed. Quite on the contrary, as soon as he demonstrated his powers, they started to panic. Fear soon gave way to anger and the students started to roughen Tad up.

Suddenly, before the situation could escalate any further, Tad was pulled into the air by an unseen force. As Tad flew above the city, he heard a telepathic voice in his head. It explained to Tad that there were many more mutants out there willing to use their powers for the greater good, but they chose to remain hidden as baseline humanity was too primitive and savage to understand. [Amazing Adult Fantasy #14] Upon arriving in the headquarters of those mutants, Tad was introduced to the owner of the telepathic voice, Tobias Messenger.

Messenger had the named the group of mutants around himself “The Promise,” as they were to represent the promise of a more hopeful tomorrow. Given how the human race had repeatedly turned on each other throughout history, Messenger believed that a war between humans and mutants was inevitable and that mutants would emerge as the clear victors. Yet, in this post-apocalyptic scenario, a voice of reason would be needed to prevent the surviving mutants from warring amongst themselves. The Promise was to be that voice of reason. To await that final day, Messenger and his followers put themselves into suspended animation for 10 years at a time, coming out for a week to look around and see if the world had significantly changed in the meantime. [X-Men Hidden Years #18]

His own anti-mutant paranoia experience fresh on his mind, Tad joined The Promise. After being in and out of suspended animation four times, Tad was forty years older but had physically aged only four weeks. The Promise learned that, during their last hibernation period, Professor Charles Xavier had founded the X-Men. While Messenger decided that the original X-Men had been indoctrinated by Xavier’s dream of peaceful coexistence too long, the two new recruits, Havok and Lorna Dane, could still be approached about joining. Tad was chosen to introduce himself to Lorna and he “accidentally” met her during a stroll into town. [X-Men Hidden Years #15] 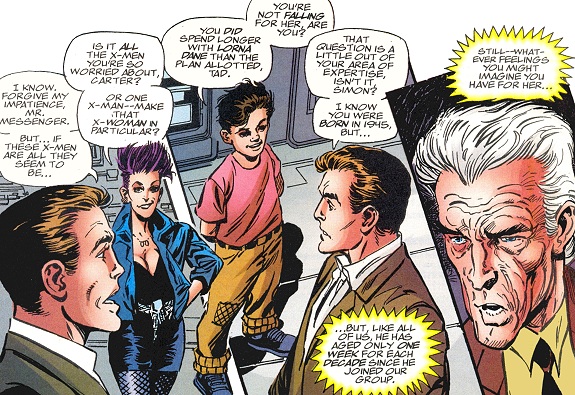 Apparently, Tad immediately fell for Lorna, as he spent nine hours with her – much longer than the first contact was supposed to last. During that meeting, Tad also used his mental powers on Lorna, erasing her memory of the meeting but leaving behind some post-hypnotic triggers, A few days later, Lorna entered a trance-like state and was transported to the Promise’s lair the same way Tad initially was. Tad introduced Lorna to the rest of The Promise, and they filled her in on the group’s purpose. Despite their protests, Lorna and two other X-Men were placed in suspended animation, which didn’t bode well with all members of the Promise. [X-Men Hidden Years #1
7-19]

One of them rigged the equipment and emerged from her stasis tube once Messenger had entered the cryogenic sleep, only to kill the powerful telepath while he was defenseless. The 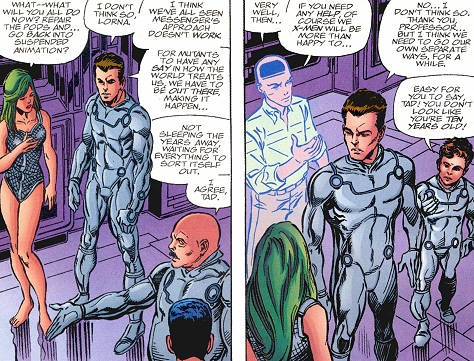 female Promise member then  released all of her teammates and the captured X-Men from the suspended animation. Although the X-Men offered to take Tad in, he and the other Promise members declined, arguing that in order to make a difference they needed to get reacquainted with the world and interact with humans, rather than keep themselves hidden. [X-Men Hidden Years #22]

It is unknown what Tad Carter has been doing since then, or if he is still alive; after all he hasn’t been seen in years. If Tad is still around, even his power status is unclear, as he may very well have been one of the 90-95% of Earth’s mutants to have lost their abilities during M-Day.