Growing up in the rural Ozarks, Edie Sawyer never knew that her parents had made an agreement in order for her to be conceived. Her father proved unable to have children and so Mrs. Sawyer became pregnant by sleeping with a man that was passing through town. For this reason, Mr. Sawyer looked at and often treated Edie as if she was a stranger during her childhood. Edie would often dream about being anywhere other than her unhappy home and it was when she was twelve that she started waking up in strange places. Everyone explained these occurrences as sleepwalking, not realizing that Edie's mutant powers of teleportation were manifesting in her sleep and acting on her subconscious desire to get away.

Edie managed to buy a crappy little television and began to practice talking like they did on the shows in order to eliminate her own hated accent. At fifteen, history repeated itself when Edie fell for a seventeen-year old boy passing through town. When Edie ended up pregnant, her mother 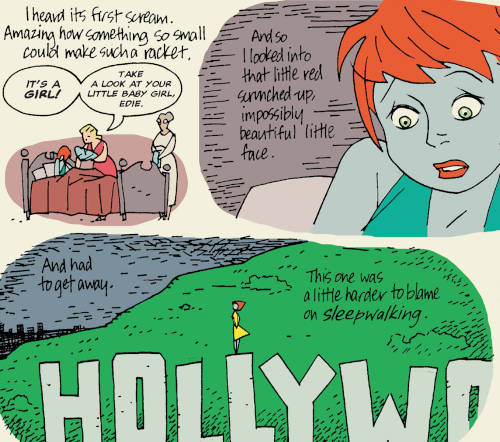 pulled Edie out of school and wanted to keep it hidden from everyone. To accomplish this, Edie's mother told everyone in town that she was pregnant, even wearing a pillow under her dress. Thus, when the baby girl Katie was born, everyone believed her to be Edie's younger sister. Unfortunately, when Edie first looked into the face of her newborn child, she became overwhelmed with the sense of responsibility and unconsciously teleported away from home to Hollywood. [X-Force (1st series) #124]

It is unknown what occurred for the next three years, however at age nineteen Edie returned to Hollywood, determined to be an actress. Her life was frustratingly turned into a cliché when she ended up having to wait tables to pay for night-school acting classes. After quitting night-school, she began to drink more heavily and met an aspiring writer named Cal. He convinced her to live 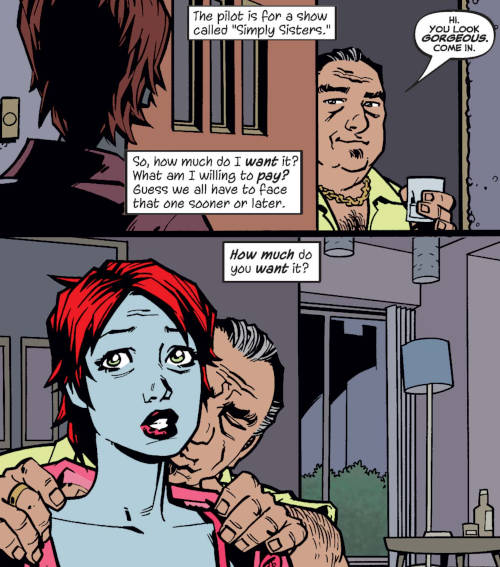 with him as his girlfriend so she could stop waiting tables. Edie thought the deal sounded workable but she actually did fall in love with him. However, one night when the two of them met with a big-shot TV executive to sell a script with Edie as the lead, it quickly became apparent that Cal wanted Edie to sleep with the executive. Edie reasoned that she wasn't any better than any of the other legions of aspiring actresses that had stooped to such quid pro quo and thus decided to show up at his apartment.

Despite admitting to herself that she definitely would have gone through with it, her subconscious manifested her teleportation powers again for the first time since she had her daughter. Edie and the executive appeared high in the sky as he was removing her clothes. She, at the very least, managed to save herself from death, and paid back her boyfriend by stranding him in his underwear in the desert 10 miles out from the city.

Using the newfound control of her power, Edie decided she would become a super-villain. Easily stealing from various banks, she was enjoying herself until she saw Zeitgeist, the leader of the 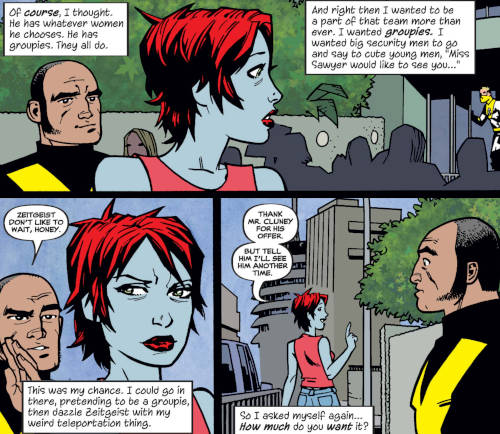 reality TV team X-Force. Immensely attracted to the man and the lifestyle of X-Force, she managed to get herself invited to be one of his groupies. Although she initially thought this was her way onto the team, she turned the offer down. She reasoned that she would get on the team under her own power, so that one day she could be the one summoning groupies to her.

After extensive practice using her power, Edie realized she was getting sleepy after teleporting, so she turned to excessive coffee drinking, rather than chemical stimulants. She decided her name would be Tele-Girl and tried to overcome the nervousness of her planned introduction with a few too many alcoholic drinks. Thus, when she teleported herself in front of X-Force and a throng of reporters and fans, she fell over and flashed her panties to all of the onlookers. One of the 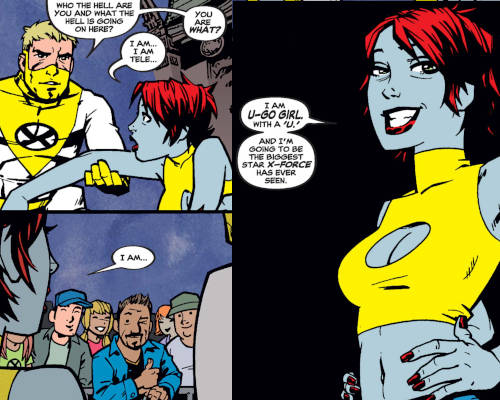 photographers yelled out to her, "You Go, Girl!" When Zeitgeist asked who she was, she proclaimed herself to be U-Go Girl and that she would be the biggest star X-Force had ever seen. By her twentieth birthday, Edie had seemingly achieved her goal and was enjoying it immensely. She even got to ignore a desperate Cal trying to give her a script he wrote for her.

Over time, Edie became one of the longest serving and most popular members of X-Force. She also had developed a reputation for flaking out early in the missions, due to her becoming so tired after teleporting. Even though they were far from exclusive, it appeared that Edie and Zeitgeist had given into their attraction for each other and were at least casually dating. While at a restaurant, Zeitgeist confronted Edie over her reliance on medical stimulants to counteract her porting for personal business. Edie countered that personal business was the whole point of risking their lives on the missions and she would not be giving it up. She suggested that maybe the pressure of leadership was getting to him and implied she should take over.

Before the conversation fully resolved, they were called in for a mission briefing where they were 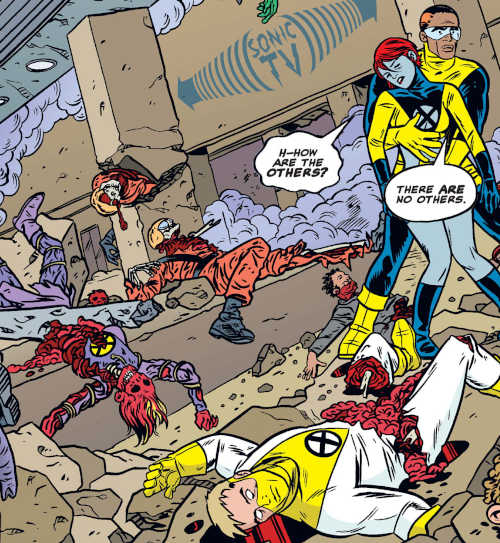 needed to rescue a boy band from some terrorists. Edie teleported the team in and the mission went well at first. However, things went south quickly when an attack helicopter showed up and fired a missile, ripping team members, terrorists and boy band members to shreds. Edie was left unharmed but in shock as she cradled the torso of Zeitgeist, his guts spilling onto her legs as he died. [X-Force (1st series) #116]

Despite the trauma of seeing nearly her entire team killed, Edie bounced back quickly and assumed that she was going to be the new team leader. The newest and only other surviving member of the team Tike Alicar, the Anarchist, challenged this assumption, claiming she was nothing but a transport bus. Edie pushed back by recounting her brutal killing of the attack chopper pilots that wiped out their team by teleporting them helplessly hundreds of feet into the air. X-Force team handler Coach quickly put an end to the argument by stating that the new team leader and new team members had already been chosen by X-Force's new owner, young software trillionaire Spike Freeman. 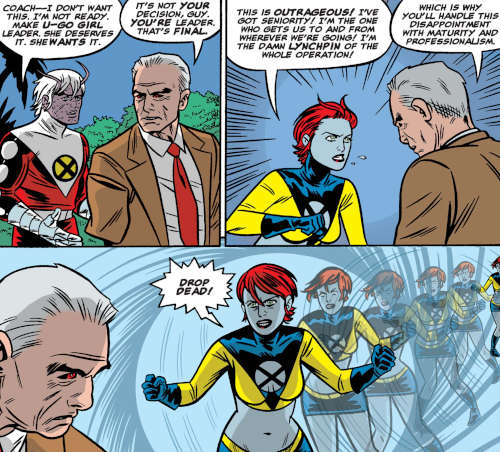 as if she was in charge of them. Coach ignored this as he described X-Force's new mission of rescuing a powerful young mutant named Paco Perez from his home government in Bastrona. Soon after this briefing, a press conference was held to introduce the media to the new X-Force. It was here that Coach announced that new member Guy Smith, the Orphan, would be team leader. Edie was obviously enraged at this outcome and teleported away. [X-Force (1st series) #117]

Edie had decided to spy on Orphan, who had, in her opinion, stolen what was her rightful position as leader. What Edie did not realize was that Orphan had a nightly ritual of playing Russian Roulette on himself. Edie mistook his actions as him trying to shoot her, but Guy lied that he only had the gun because of a stalker. Buying the lie, Edie got into the real reason she had come, to talk Guy into leaving and making her the leader. When manipulation seemed to fail, she resorted to her signature move of teleporting her victim high into the air. This threat seemed to backfire when Edie started to fall asleep as the two were falling to their deaths.

However, she managed to teleport the two of them onto her bed just before falling asleep in Guy's lap. The next day, Coach explained more details of their mission to rescue Paco, including first contacting an informant named Diego. When Anarchist asked Edie if she was really going to create a splinter group, Edie said it was media B.S. as she looked fondly at Guy.

After Edie teleported the team into Bastrona, Orphan quickly decided to find Diego solo and ordered the team to stay behind. Luckily for Guy, Edie ignored these orders and the team followed 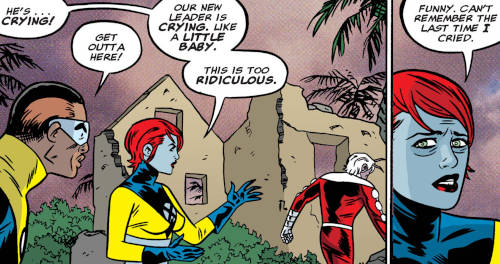 and rescued him from a trap Diego had set up with the government. They managed to secure Diego and teleport away despite one fatality on their side. Edie even casually joked about the death and proceeded to criticize Orphan for showing mercy to Diego and even crying over their teammate’s demise. [X-Force (1st series) #118]

Keeping Diego alive allowed the team to teleport into the compound holding Paco, where he was hooked up to machines to drain his miracle-like healing abilities. An intense fight ensued in which both Diego and another member of X-Force were killed. Edie struggled to remain awake by taking more pharmaceutical stimulants but still fell asleep. Orphan managed to rescue Paco and ordered a drowsy Edie to take them home. In her stupor, she teleported them to her run-down childhood home in middle America. When Edie's mother and her "little sister" Katie came outside to greet them, Edie freaked out and teleported the team back to Los Angeles, though far from their headquarters.

The erratic nature of Edie's ports could no longer be ignored and a cover story was created that she was attending rehab for her drug and alcohol addiction. Soon after this, Edie started having 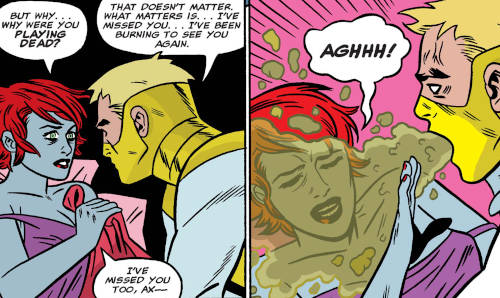 nightmares about Zeitgeist, whom she had been missing. She was rudely awakened by Coach, who was promptly punched for being in her room. Despite this, Coach still propositioned her to take down Orphan using a combination of blackmail and violence. He told her that she could be leader of the team like she wanted if she just helped him take out Guy. [X-Force (1st series) #119]

Resolved to make Guy another in a long line of people she had killed to get what she wanted, Edie showed up to his house just as Coach’s blackmail story broke on the news, detailing Orphan’s still alive parents attempted murder of Guy as a child. She listened to his story of daily attempted suicide via Russian roulette before kissing him suddenly. Edie admitted to a taken aback Guy, that she was feeling pretty crazy from the poisonous drug cocktail Coach was supplying her for her teleportation issues. She asked him to go make her a complicated drink so that she could load Guy’s revolver with a full chamber of live ammunition and quickly left after completing her task.

Feeling guilty about what she had done, she proceeded to get very drunk and was approached by Coach. Edie started to admit that she was having second thoughts about killing Guy. She demanded that he give her more of the drug cocktail so she could teleport to save Guy. She inhaled the drug as she admitted out loud that she thought Guy was the only decent one of them and that she had felt something when she kissed him. Unfortunately, the inhaler was spiked with a

paralytic and the predator Coach proceeded to attempt to molest a still conscious Edie. Luckily, this terrible fate was avoided when Guy showed up in time to save a remorseful Edie. Still mostly paralyzed, Edie managed to grab and reverse the gun Coach was holding, which led to Coach being shot and killed by his own hand. He would not be missed. [X-Force (1st series) #120]