-) Edie was a stylish celebrity always ready to wear the lastest fashionable outfit. 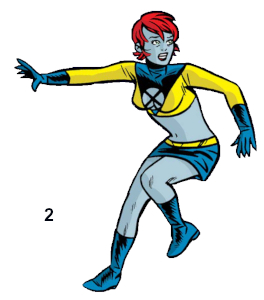 1) Edie wore this dark costume only once, during an operation against North African rebels. The outfit matched the rest of the team's dark colors and essentially had the same design as her brighter colored costume. The darker blue of her standard costume remained the same but the yellow sections became a lighter shade of blue. This outfit also included a mask covering the top half of her face and hair. [X-Force (1st series) #116]

2) On missions, Edie generally wore her team uniform. This consisted of a long-sleeved, yellow top that stopped just under the chest and had a blue reverse triangle pattern cutting through the center and rising over the shoulders and completely covering the neck. A light-blue X symbol rested directly in the middle. It also consisted of a short blue skirt with a yellow belt, blue shin high boots, and blue opera gloves. [X-Force (1st series) #116] 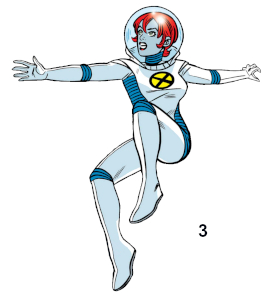 3) On X-Force’s mission to space, Edie wore a team spacesuit the same as everyone else. It was mostly thick, white, armored material with flexible, blue sections covering the joints to allow free movement. There was also a clear domed space helmet. [X-Force (1st series) #126]