Myles Alfred was born into a family of intellectuals – his father was a renowned academic and his mother an ethnomusicologist. Myles fit well into this world, his own scholarly success leading him to study at Harvard. However, his study of Shakespeare and forays into literary discourse were disrupted by the emergence of his lycanthropic mutant powers. Myles’ transformations were initially triggered by anger, fear or other stressful circumstances, but he soon learned to control these transformations and harness his mutant talents.  Not all was smooth sailing for Myles.  His father saw him as a monster and began verbally abusing Myles, leading to a deep rift between the two.

Taking the name Vivisector, Myles joined the media-savvy mutant team calling themselves X-Force. The team was not your typical gathering of mutant vigilantes but a successful multi-media franchise and marketing endeavor centered on a reality TV show. Myles played up his intellectual side and reluctance to embrace his mutant nature over his scholarly interests. His erudite bookworm persona contrasted sharply with his teammate Phat who portrayed a stereotypical “white boy rapper” from an impoverished redneck background and the two clashed on a regular basis. [X-Force (1st series) #117]

Myles joined X-Force just as their fame and popularity in mainstream culture were taking off. He soon learned that the team was not just about garnering media attention and selling action figures when they were assigned an “off the record” mission in the war-torn, South American nation of Bastrona. Their goal was to liberate a young mutant named Paco Perez who was being exploited for his powers. Myles questioned the wisdom of going into this situation using intel from a less-than-reputable source.

Tragically, his instincts were accurate and X-Force was betrayed by their contact which resulted in the death of their openly gay member Bloke. The stress of combat and the trauma of seeing his teammate die before his very eyes sent Vivisector into a berserker rage. Myles was embarrassed at his lack of control and asked his teammates to keep it quiet. However, Phat blatantly refused and took this as ammunition he could potentially use to amp up their public rivalry. [X-Force (1st series) #118-119]

Vivisector and Phat soon found themselves playing on the same team when X-Force’s owner Spike Freeman encouraged them to raise their public profile. He pointed out that the two of them were constantly in the background, overshadowed by the tabloid-worthy exploits of their more controversial teammates. Freeman encouraged them to generate some conflict with the senior members of the team who were flashier and generated more buzz with the press. Unbeknownst to Myles, Spike Freeman was using them to further his own agenda.

Together, Vivisector and Phat began sowing some seeds of contention that brought them some additional screentime. Initially, they tried acting in a more outrageous fashion while in public. They showed up wasted to U-Go Girl's stint as the host of a late night talk show and started a fight with their teammates in an attempt to build up their reputations as the team's "bad boys". This met with marginal success and the two continued to operate as a team in this fashion, vying for a piece of the limelight. [X-Force (1st series) #120-122]

The "team-up" between Vivisector and Phat soon began to raise some uncomfortable questions. Their team leader The Orphan was concerned about their isolation from the rest of the team, their homophobic teammate Spike raised an eyebrow to their growing bond, and the media began asking Myles about his dating history. During a particularly treacherous mission into space, the two clasped hands during take-off. Spike noticed their public display of affection and attacked them, directly questioning what the nature of their relationship was. Despite Billy Bob's hesitation, Myles elaborated for the team and admitted that they had "special feelings" for each other. When Spike escalated his aggression towards the two, The Orphan defended them and made it clear that no matter what their relationship to each other was, they were both part of the team. The truth was that this was merely a ploy to get additional media attention. Billy Bob was nervous about how they they would have to go to convince the world of their relationship and shared his trepidation with Myles. They had no clue that The Orphan had overheard their conversation and knew the truth. However, when Phat was gravely wounded in battle, Vivisector showed genuine concern and had to be ordered away from Billy Bob's side and back into the battle. [X-Force (1st series) #125-128]

Phat survived the mission but U-Go Girl ended up dying.   Perhaps it was the stress of the battle, Billy Bob's brush with death or the shock of Edie's untimely demise that drove Myles and Billy Bob to finally express their true feelings for each other.  They realized their act of being gay was much more than that and the two slept together.

At first, neither of them were quite comfortable with their new relationship. However, Vivisector came to accept his newly discovered sexuality rather quickly.   Phat was another case entirely.  When confronted by the media, Billy Bob got defensive and responded withan angry homophobic remark one might expect given his public persona as a redneck rapper.  When Vivisector called him on his behavior, Billy Bob confessed that he just wasn't comfortable with everyone knowing now that they were really together. [X-Force (1st series) #129]

Phat's internalized homophobia led to a swift split between the two and mounting tensions. This culminated in Phat being unable to access his mutant powers which Myles believed were blocked by his own inner conflict regarding his identity. Despite the loss of U-Go Girl and conflicts galore, the team carried on under the new name X-Statix. Though he continued to make highbrow quips with his teammates, Myles was deeply hurt by Billy Bob's indecision. During a drunken evening of 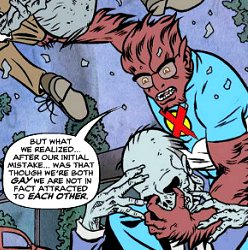 self-reflection, Vivisector began to question if being part of the team's media machine was warping his identity and robbing him of his free will. After a brief break from the team, Phat returned and he and Myles had a lengthy talk. They concluded that they were both gay and publicly came out to the media. They also realized that they weren't truly attracted to each other and parted amicably. With their identity issues resolved, Phat's powers returned to normal and both their media statuses improved dramatically. The entire team set aside their personal beefs and reunited to come to the Orphan's aid during a highly dangerous mission he had undertaken alone while the others bickered. [X-Statix #1-4]

Though no longer a couple, Vivisector and Phat continued as teammates and supported each other as they continued to try to be as popular as the other long-time members of X-Statix.  The team's popularity ebbed and flowed, reaching a new peak during filming of the X-Statix movie.  The film featured an actual mutant, the charismatic actor and skateboarder, El Guapo.  As part of the film's promotion, El Guapo joined the actual X-Statix team.  Myles found him very attractive and made no secret of this, depsite the fact that El Guapo was decidedly straight.  Phat tried to talk some sense into Myles but his counsel fell on deaf ears.  A short time later, Phat died in battle after using his excess mass to contain a massive explosion that would have killed the entire team.  Myles mourned for his friend and first love.  [X-Statix #11-18]

Shortly after Phat's death, Myles met and fell in love with a hot young soap opera star named Brandon Cody. The two were a media match made in heaven and Brandon seemed to embrace having a mutant boyfriend. Though he had finally embraced his sexual identity and found happiness, Myles still harbored a great deal of pain around his mutant identity. When a scientist named Alex Finlay offered Myles a customized cure that would remove his X-gene, he could not 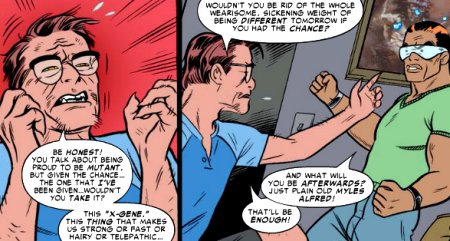 resist. His teammates tried to dissuade him but years of emotional abuse and rejection by his anti-mutant father won out. Myles accepted Dr. Finlay's offer and subjected himself to this "cure". Shortly after, Myles shared the news with Brandon who broke things off when he learned that he had willingly given up what made him "special". In addition to losing his new love, Myles was also kicked off the X-Statix team now that he was no longer Vivisector.  Now that he was no longer a mutant, Myles returned home for his father's birthday.  He hoped that his father would finally accept him but this was not the case at all.  Given the chance to finally tell his father how he felt about him, Myles found that he didn't have the courage to share his true feelings. 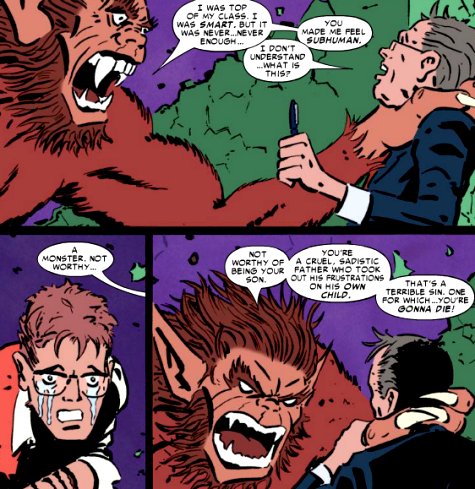 Myles was unaware that Dr. Finlay had not destroyed his X-gene but had actually removed it so that he could use it on himself.  His process worked but in order to access Myles' lycanthropic powers he had to use the same emotional triggers.  In Myles' case, this was the pent up anger he felt towards his abusive father.  These feelings overwhelmed Dr. Finlay and when he transformed into an even more bestial version of Vivisector, he went after Myles' father. He crashed Prof.  Alfred's birthday party and attacked him, not just with his wolfen claws but with all the unspoken rage that Myles himself could not voice.  Driven by this rage, Finlay was about to kill Myles' father.  Despite the fact that all that Finlay had said was true, Myles couldn't let this monster kill his father.  He found his courage after all and stopped Finlay, once and for all.  In the wake of this, he told his father that everything that Finlay had said was true and finally put the demons of his past to rest.  With Finlay dead, Myles's powers resurfaced.  Only now, instead of using feelings of anger to trigger the change into Vivisector he used positive emotions.  [X-Statix #19-20]

This was not the only positive thing to come from attending his father's tumultuous birthday bash. Myles met a student of his father's named Raju, who admired him not for his mutant powers or celebrity status, but his intellect. The two soon became an item. After a team-up with the Avengers, 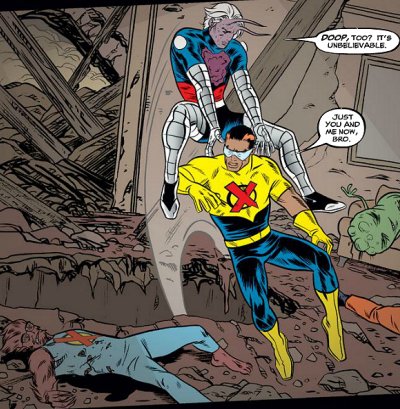 Captain America himself acknowledged the team for their heroism. Realizing that they might actually have more to give to the world than cheap entertainment, the team decided to disband. They threw a star-studded farewell party and prepared to hang up their tights for good. At the party, they were approached to do one final mission together and earn a last paycheck. Thinking it would provide some closure to their time together (and a healthy addition to their savings), Myles and the others agreed. The mission blew up in their faces... literally and Vivisector and the other remaining members of the team all perished. [X-Statix #25-26]