In Earth X, the rules of magic and the supernatural began to break down as many “spells” were revealed to be different manifestations of the Celestial Seed in mankind. When the Wendigo first left Canada and followed its hunger to Wakanda, there was only one. However, Jamie Madrox succumbed to the curse when he gave in to his hunger and ate one of his own multiple bodies. This resulted in a self-replicating pack of Wendigo, with a hunger that grew with its numbers. The

Wendigo dogged the trail of King T’Challa, the X-Men and their other allies as they traveled from Wakanda to the Savage Land when the world’s climate changed dramatically. The Wendigo hid their numbers and their true identity for a time by removing their dead from each fight, but eventually the heroes learned Madrox’s fate. A trap was set and the Wendigo died, killing Jamie Madrox and ending the curse.

In What If...? (2nd series) #29, a very different history prevented the Hulk from being created, and as a result Weapon X faced the Wendigo alone. Marie Cartier and Georges Baptiste ended up sacrificing Logan to the Wendigo in order to cure Paul. However, some aspect of Logan’s genes or spirit gave him the power to control his transformations into the werebeast. Fascist Super-Soldiers from America (secretly ruled by the Red Skull in Steve Rogers’ body) attacked Canada for its resources and named Logan’s powerful new form a “Hulk” when he opposed them. 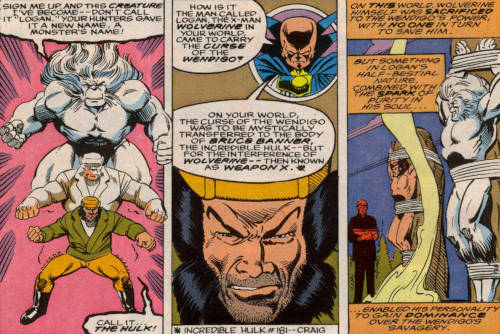 The real Captain America gathered a team of Avengers to fight against the corrupt S.H.I.E.L.D. running America, and the Hulk agreed to fight by their side. The Red Skull was killed and the super-soldier formula lost, but Hulk and the Avengers died fighting S.H.I.E.L.D.’s Super-Soldiers to ensure freedom for generations to come. 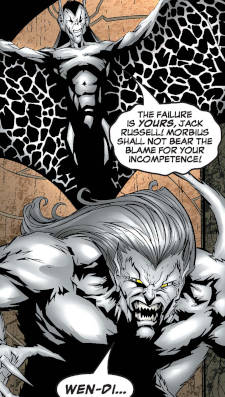 In Exiles (1st series) #55-57, the team visited a world where Manhattan was still trapped in Kulan Gath’s spell reverting it to the Hyborean Age. Unfortunately, this version of Kulan Gath lost control of his kingdom when the spell drew a variety of supernatural beings to Manhattan.

The demon Zarathos emerged and overpowered Gath when he tried to take control of the Ghost Rider, becoming the new master. Zarathos recruited a legion of monsters to serve him including Wendigo, Morbius and Werewolf by Night. While fighting with the Exiles and other rebels, Wendigo was struck by Magik’s Soulsword, negating the enchantment which cursed him, turning the werebeast back into a normal man.