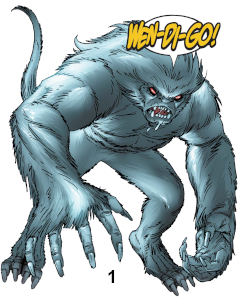 1) The original Wendigo had a more human-looking hairline and facial features, as well as a rather pronounced nose. [Incredible Hulk (2nd series) #162]

2) The classic design for the Wendigo was introduced fighting the X-Men and Alpha Flight. It had a shaggy, wild mane that would become iconic for the creature. His previous yellow eyes also became red. Wendigo variants would occasionally show features from the host, like Larry's moustache, Andre's missing fingers, or Mauvais' unique expression. [X-Men (1st series) #139]

3) Yeti had several adornments to "civilize" the special agent, including a loincloth, nose ring, and an electronic control collar. A later appearance replaced the collar with a cybernetic implant on his head, increasing his intelligence to the point of speech. [X-Force (1st series) #11]

4) The Ur-Wendigo was a larger example with a more pronounced snout and uneven fur coat. It was somewhat reminiscent of the Wendigo pack who fought Red Hulk and the ancient Wendigo of 1,000,000 B.C. [Weapon H #1]