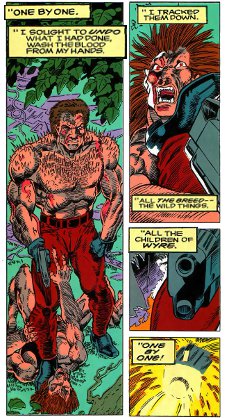 Nothing is known about Wyre’s life before he, in unknown circumstances, was enhanced by the mysterious organization known as the Secret Empire and implanted with synthetic wires that would extend from his body. Under the employ of the Secret Empire, Wyre was a master assassin and trainer to a group known as the Breed, who were themselves augmented by Wyre’s enhanced DNA into ferocious, savage warriors. This apparently went on for some time, as Wyre would see anonymous and faceless people snatched from the streets and taken to the Secret Empire for transformation with his enhanced DNA and training under his superior fighting skills.

Eventually, though, this proved too much for Wyre to cope with, and he snapped, slaughtering the breed, and destroying the Secret Empire’s facility. Unbeknownst to Wyre, the fledgling Department H located the destroyed facility and found a survivor, the young man who would become Wild Child. [Alpha Flight (1st series) #117-118]

Eventually, when Wild Child was re-introduced to Alpha Flight as Weapon Omega, Wyre realized that one of the Breed survived their slaughter. Reliving the grief and horror at what he and the Secret Empire turned Wild Child into, Wyre tracked him down, determined in his belief that all of the Breed must die so that he could find peace within himself.  Locating Weapon Omega, Wyre 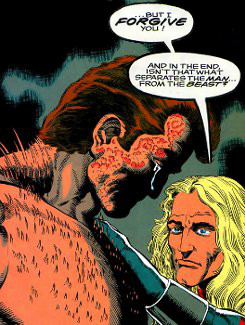 fought his quarry for some time, dropping cryptic clues to the younger man about his mysterious past. This reunion also brought Wyre into conflict with some of Weapon Omega’s Alpha Flight teammates, who were searching for him. During the battle, Wyre lost track of Weapon Omega, who fled. [Alpha Flight (1st series) #114-115]

Wyre soon located Weapon Omega, who was dealing with another crisis involving his friend Nemesis and Weapon X. He battled Weapon Omega again, determined to finish the job he started all those years ago by killing the last of the Breed. However, as the battle progressed, Wyre became overwhelmed with emotion, the exact opposite of the cold-hearted killer he had been portrayed as. He realized that he could never forgive himself if he carried on this way, but he didn’t have to forgive himself, as Weapon Omega offered him his forgiveness. [Alpha Flight (1st series) #116-117]

Wyre was taken into Department H custody and, after being stripped of his clothes and weapons, kept in a padded cell. He was visited by Weapon Omega who sought answers about his past, though Wyre did not seem in the mood to assist.

Shortly thereafter, Department H was overrun by the vigilante anti-super human organization known as Judgment, who easily overpowered the members of Alpha and Beta Flights. Fortunately for them, it was at this time that Wyre had chosen to escape his cell. Though he felt he owed nothing to Alpha Flight, Wyre engaged the members of Judgment in combat before they could destroy Beta Flight’s Manikin, who was healing inside a cocoon. When Alpha Flight’s leader, Guardian, queried Wyre as to why he simply didn’t leave Department H, he explained that he wanted to turn the destructive into constructive. However as attitudes towards super-humans in Canada started to turn shaky and Guardian rallied the members of Alpha and Beta Flights to find out whether they would continue to serve Canada, she did not include Wyre in the discussion. [Alpha Flight (1st series) #118-120]

Nevertheless, Wyre remained at Department H, supposedly incarcerated, although he still routinely escaped his cells. He also started wearing the standard blue and red Gamma Flight training costume, and even joined Beta Flight in a training session where he took on the sorceress Witchfire.

Guardian interrupted the session, bemused that Wyre had escaped another detention cell, and decided that it would be cheaper if she gave him the run of Department H. Wyre told her that he will not be caged, to which Guardian reminded him that, until the powers-that-be decided what to do with him, he was within Department H as a guest. When it became clear that Wyre wasn’t interested in talking to her, Guardian told him to leave, as it would be one less thing for her to worry about. However, when most of Alpha Flight left for a mission, Wyre was left wondering what he should do with his life. Now that his quest to destroy the Breed was over, he had no purpose. 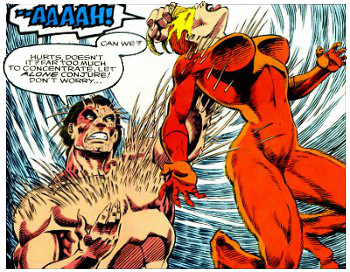 Wyre was lost in this thought when he was suddenly attacked by Witchfire and left for dead. Still alive, he tracked her down and proceeded to use his wires on her once more. Fortunately for her, by this time Guardian had returned to Department H and talked Wyre down, informing him that if he could not abide by her rules then he would have no place with Alpha Flight. Wyre released Witchfire, who was captured by Manikin, one of her Beta Flight teammates. [Alpha Flight (1st series) #122-124]

Wyre was among the associates and former members of Alpha Flight who were summoned by Shaman to assist on a mystical assignment against a demon in the Land of the Dead. During the mission, Wyre and the others were killed by Shaman, awakening afterward in the Land of the Dead. Wyre immediately attacked Shaman, who assured him that their bodies were being preserved until their return to the physical realm. With the mission a success, that is indeed what happened. [Alpha Flight (1st series) #125-126] 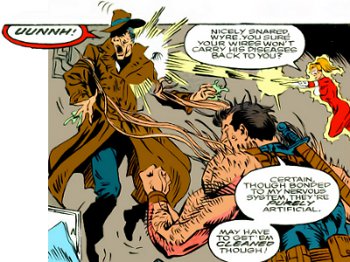 When anti-super human hysteria neared a breaking point in Canada, Wyre assisted Alpha Flight against the militant Hardliners, human soldiers in armor, who were the new proposed “super team” for Canada, and in the subsequent battle against the Master of the World and his new Omega Flight. However, despite getting somewhat comfortable with Alpha Flight, Wyre never received official membership, and Department H – and Alpha Flight – were shut down soon after. [Alpha Flight (1st series) #128-130]

Although Alpha Flight was re-started sometime later, Wyre has not been part of any line-up since his brief affiliation with the team. Perhaps his newfound peace led him to a quiet life away from heroics, or possibly, like fellow Alpha Flight associate Nemesis, Wyre was deemed too dangerous to be on the loose, and incarcerated in a secure location, waiting for someone to find him.