1) Xi'an first appeared in a simple black gi. This robe was held by a white sash around his waist. He wore white bandage wrappings around each hand and forearm. An additional black glove covered his mutant disintegrating hand. [X-Men 2099 #1]

2) As the Desert Ghost, Xi'an's costume embodied the "Lawrence of Arabia" look. He wore several layers of brown and tan cloth to blend in with the desert sands. He wore a keffiyeh headdress covering his head, neck, and face from sands and exposure. Xi'an kept the previous gloves and wrappings around his hands to hide his mutant touch. [X-Men 2099 #4] 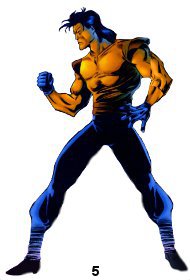 3) While riding with the Lawless (and later after becoming unhinged), Xi'an wore a black biker's outfit. The tunic was strapped into place by a set of red clips over his right breast. He also wore a red belt and red bands at the top of his gloves and boots. [X-Men 2099 #10]

4) As Controller-X, Xi'an joined the ranks of the Theatre of Pain. He adopted the featureless golden mask of the Controllers, and a flowing operatic red cape. Beneath the cape was a gold and metallic armor. The gloves ended in sadistic sharpened nails for the fingers. [X-Men 2099 #22]

5)During his time in Halo City, Xi'an did not join the Protectorate, and so did not wear a uniform. He instead wore a tan sleeveless tunic over black pants. [X-Men 2099 #26]