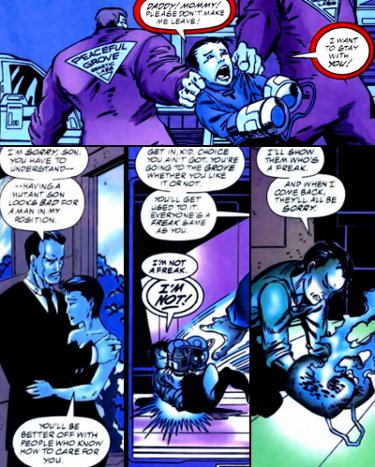 Xi'an Chi Xan was born to a prominent Vietnamese-American family in Reno, Nevada in 2071. When he was young, his parents relocated to an affluent area in Aspen, Colorado. He wanted for nothing as a child, but at thirteen his life suddenly changed for the worse when his mutant abilities manifested. His parents couldn't afford the stigma of having a mutant for a son, so they sold him off to the Bio-Shops for experimentation with only a token showing of sympathy. Angry and abandoned, Xi'an used his disintegrating touch to break free of the Bio-Shop's transport and disappeared on the streets among the decreds and lowlifes. He stumbled onto Massive Cur turf and was confronted by the gang's leader, Chainlink. He apparently fell in with Chainlink and the Curs, living on the streets for years. [X-Men 2099 #22] 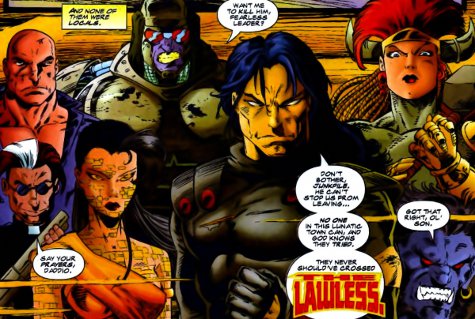 Xi'an grew harder and meaner as he became an adult, acting as an outlaw on the back roads of America. He eventually formed a gang called the Lawless, a motley crew of mutants, net-divers, Thorites and thugs. Xi'an apparently started a relationship with the Lawless' cyber-diva, Broken Haiku. During his time with the Lawless, Xi'an came to the attention of Noah Synge, head of the Synge Casino in Las Vegas and godfather of the Greater Nevada Syndicate. Synge was impressed with Xi'an's ruthless reputation, and tried to get him on the Syndicate's payroll. Xi'an rejected the offer, leading to a long-standing enmity between the two men. [X-Men 2099 #2]

While on the road in 2094, the Lawless came across the isolated desert town of New Hope. They were completely caught off guard when the main street exploded from a series of concealed mines. The Lawless became prisoners of the Foolkillers, a fringe cult of religious fanatics who patterned themselves after the 20th century vigilante of the same name. The town elders of the Foolkillers attempted physical and chemical torture to forcibly convert the Lawless to their faith, but failed. Haiku managed to hijack the cybernetic systems holding them hostage, and the Lawless attempted to flee, but faced the entire town of New Hope united against them. The suicidal charge of New Hope led to the whole town being massacred by the Lawless in self-defense. The last surviving elder fell before Xi'an as the Lawless made their way out of town. [X-Men 2099 #32-33]

Indeed, Xi'an had a real talent for pissing people off. The Lawless ended up on the wrong side of the Elysium Biomedical Corporation, on the run from their cyborg bounty hunters, like Gearbox. Xi'an, Haiku and Victor Ten Eagles were hiding out in the Glass Eye Cantina in Nogales when Gearbox tracked them down. The cyborg's first salvo knocked Haiku out, and Xi'an and Victor were outmatched by Gearbox's weaponry. Despite their relationship, Xi'an encouraged Victor to leave Haiku behind and save their own skins.

The Lawless degenerated after that, as did Xi'an's fortunes. His enemies began to line up at the door for a piece of him now that his support network was failing, and Xi'an was forced to flee America to avoid the cartels.  He ended up in Saigon hiding out at the site of a former Olympic Games thanks to his friend Jimmy, but the assassin Quickdeath found him anyway. Jimmy was killed for helping Xi'an, so the outlaw and the assassin fought through the abandoned plaza. Xi'an nearly died in Saigon, but he apparently killed Quickdeath in the end. [X-Men 2099 #22]

Xi'an hit rock bottom in Saigon, and underwent a transformative experience. Seeing the dire straits his selfish ways had led him to, Xi'an reinvented himself as a selfless champion of the masses. Returning to America, he reached out to the people in the country that had been abandoned or ignored by the MegaCorps hierarchy. The abandoned Nuevo Sol Arcology in the Nevada desert became his meeting ground for nomads and fringers, decreds and discards, mutants and degens. As he spread his new message of unity and brotherhood, Xi'an also took particular interest in his own mutant heritage. He studied what records remained of mutantkind during the Great Purge of the 2030's and the decades that followed, learning from the words of Xavier, Magnus, Del Ruiz and Zhao. Xi'an decided to forge his own team of X-Men for the 22nd century. 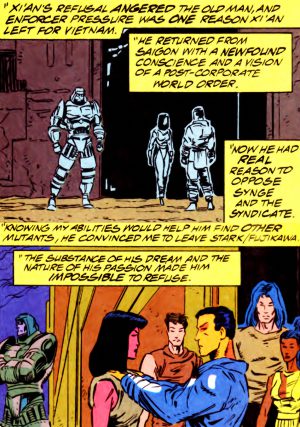 His first recruits proved to be prophetic. Xi'an found Shakti Haddad, a young woman rebelling against her illustrious father, a flesh trading czar on the Red Market. Shakti was a living mutant detector and her powers made her crucial to Xi'an's future success in finding more mutants. However, Xi'an also reached out to Junkpile, one of his brothers in the Lawless. Junkpile was a mutant, but also a twisted cynic and a mercenary at heart. Their brotherhood from the Lawless got him to join Xi'an's crusade, but Junkpile found his old partner's new outlook grating and delusional.

As the gatherings continued, Xi'an marshaled a small force of a half-dozen mutant X-Men. Unfortunately, he also drew the wrong kind of attention from the Greater Nevada Syndicate of Las Vegas. The criminal Syndicate was the largest Corporate-level power in the area, and didn't take kindly to their flesh trade being interrupted by revival meetings out in the sands. Xi'an's old enmity with Noah Synge continued, as each man was now directly interfering with the other's activities. Xi'an approached Synge on a horse ride and informed him that the kidnapping and sale of nomads would no longer be tolerated. He used a display of his disintegrating touch for emphasis.

Returning to the gatherings, Xi'an prepared to address his followers on the need for self-reliance in the face of corporate and criminal oppressors. Unfortunately, a conspiracy of events had been set into motion against Xi'an. Noah Synge's son Lytton killed his father to take control of the Syndicate, and exposed him to a molecular deterioration process to frame Xi'an for the crime. Junkpile sold out to the Syndicate for a pittance, and allowed an assassin access to the gatherings. The sniper would have killed Xi'an during his speech if Timothy Fitzgerald -- the last mutant recruit for the X-Men -- hadn't spotted the glint of his rifle and spoiled the assassin's aim with a bio-blast. As it was, Xi'an still took a round in the upper chest. 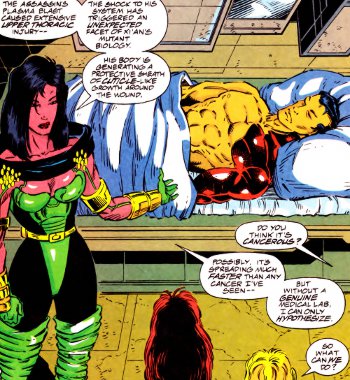 The gathering exploded into chaos as Syndicate enforcers followed up on the first shot. Shakti got the injured Xi'an and the X-Men into their mobile home, the eXperience. A mutant survivalist named Bloodhawk helped the X-Men escape the Syndicate forces outside the Arcology, and they fled to the Hoover Dam to recuperate. Xi'an's condition continued to deteriorate as his body began to sprout a biological shell from the site of his wound. This shell spread to eventually encase his entire body in an impermeable cocoon. As a result, Xi'an was in no condition to resist when Junkpile tracked them down. The Judas brushed aside the X-Men on the scene and brought Xi'an's cocoon back to the Synge Casino. 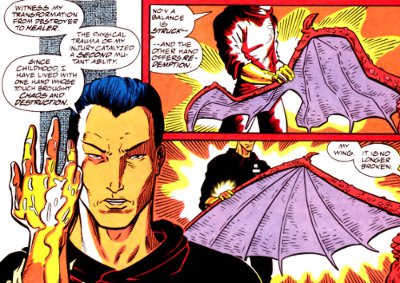 Over the next few hours, two squads of X-Men tried to infiltrate the Synge casino to find Xi'an or evidence of his innocence. They once again battled Junkpile, who killed their youngest member Serpentina in the brawl that followed. Miraculously, Xi'an managed to rescue himself when his cocoon cracked open, leaving him completely healed. Moreover, he was now in possession of a second ability -- his right hand could now heal as easily as his left hand destroyed. Xi'an easily disposed of Junkpile, but his new healing abilities were not enough to restore Tina to life. Desdemona Synge learned of her brother's patricide, and let Xi'an and the X-Men walk without further violence. [X-Men 2099 #1-3]