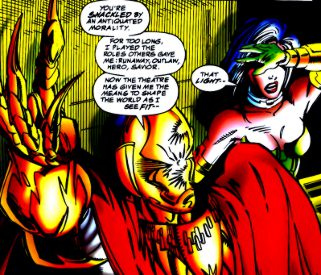 Controller-X prepared to make his debut in the Theatre of Pain on the main stage, crafting a show around the comatose body of Master Zhao. Zhao's power was harnessed into the Mindfire Machine, a neurotech receptor that would harness the bitterest memories and emotional turmoil of thousands of human "cattle" at once, transmitting that adrenal thrill electronically to the Theatre's debased clientele via simulcast. As he prepped for the show at the Theatre's Floodgate Bio-Resources Processing Center, Controller-X spotted the X-Men trying to infiltrate the Slaughterhouse, and alerted security. He personally located and defeated Cerebra in combat, despite her pleas to what remained of his better nature.

Controller-X and Brimstone Love unveiled the Mindfire Machine before Cerebra as the show started. They offered her a place in the Theatre based on her father's position in the Red Market and her own considerable skills in biology and genetics, but she refused. Shakti tried to get Xi'an to see that the Mindfire Machine was targeting and exploiting the very people he once tried to uplift during the gatherings, but his response was simply, "That's show business." 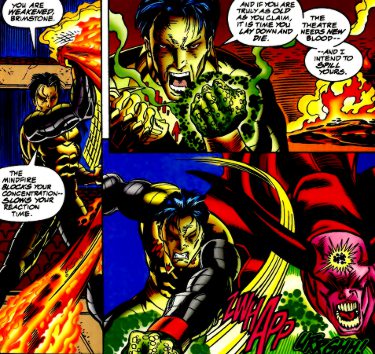 As Controller-X's symphony of sadism began, he had Shakti strapped into the neurotech along with the rest of his victims. The arrival of the other X-Men interrupted the show, however, and Brimstone Love took to the main stage to deal with the mutant rabble. With Brimstone occupied, Xi'an took the opportunity to reveal his true colors. His lust for power eventually overcame even the Theatre's indoctrination process, and Xi'an had schemed to unseat Brimstone Love as head of the Theatre of Pain. He weaponized the Mindfire Machine specifically to disorient Brimstone Love and prevent him from using the full scope of his powers. Xi'an's attempted coup was halted when Cerebra overloaded the Mindfire Machine, consuming Zhao's body and ending Brimstone Love's disability. Still weakened by the assault, the Theatre's leader chose to teleport away instead of facing the X-Men further. 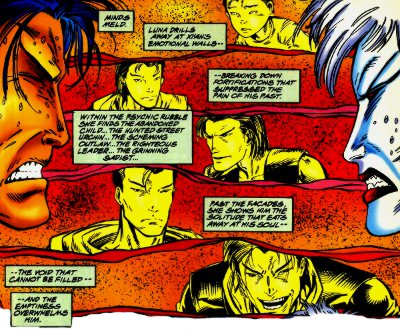 Xi'an was furious at the X-Men for letting Brimstone Love get away before he could cement his rule. He ridiculed them for abiding by Xavier's dream, admitting that he thought it was an impossible standard to live up to. As Xi'an's ranting continued, La Lunatica came up behind him and exposed him to her traumatic touch. Luna had no great love for Xi'an like his former teammates, and believed anyone who joined the Theatre of their own free will was a lost cause. Xi'an tried to break free from Luna's grasp using his disintegrating touch on her, creating a vicious loop -- her psychic vampirism drew strength from his emotional turmoil to continually fight off the pain and injury caused by his touch. As Luna's power went deeper and deeper into Xi'an's psyche, she broke through his mental defenses, his rationalizations and all the layers of psychic fortifications that protected the scared and abandoned child at his core. In the wake of Luna's assault, the benevolent Xi'an was back, but shattered and demoralized by what he had done. [X-Men 2099 #23-25] 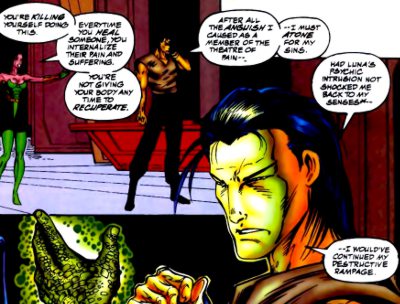 In the aftermath of the Slaughterhouse's shut down, President Doom created a haven for their victims and any other disenfranchised residents of the fractured states of America. Based on the new west coast, Halo City would be a home for mutants and other classes looking for a place of equality, and Doom wanted the X-Men to act as the city's Protectorate. Although he remained associated with the X-Men, Xi'an chose not to resume leadership of the group or join the official Protectorate. Instead, he sought penance by using his healing gifts at the medical polyclinics run by the Sisters of the Howling Commandments. Xi'an's search for vindication consumed him, however, and Shakti was concerned he would overtax his healing abilities and risk his own health while trying to find absolution. His troubled mind wasn't helped when the Undead firebombed the polyclinics due to Xi'an's connection with the X-Men. [X-Men 2099 #26-27] 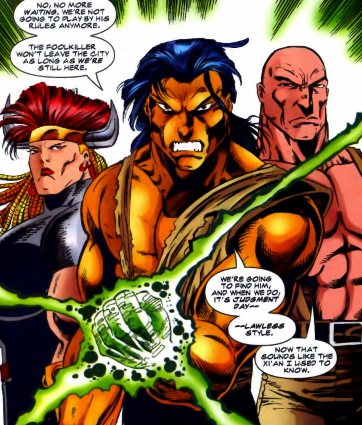 As Xi'an continued ministering to the sick and injured, he was surprised to find Victor Ten Eagles among them. A single Foolkiller survived the massacre of New Hope and was now gunning for the Lawless. Victor lost an arm escaping from him in New Mexico. [X-Men 2099 #29, 31] Reuniting with Mongrel and Auntie Maim in Halo, the surviving Lawless learned that the Reverend and possibly Broken Haiku had already been targeted and killed by the Foolkiller. Xi'an attempted to settle this business without involving the X-Men, and presented himself as bait to draw out the Foolkiller. Instead, the vigilante evangelist turned the tables and grabbed Mongrel while the others were focused on Xi'an. He lured Xi'an and the Lawless to a chemical factory where he intended to wipe them all out with a bomb planted in his chest. Xi'an tried to reason with the Foolkiller, explaining that the Lawless fought back in New Hope in self-defense, and they had no choice but to destroy the town. When the X-Men arrived anyway despite Xi'an's wishes, La Lunatica's touch unlocked Foolkiller's buried memories of having to kill his own parents after they were judged "fools." Xi'an tried once more to reach out to the Foolkiller, telling him he was wrong to dedicate himself to the path of vengeance. The Foolkiller replied that he was therefore the biggest fool of all, and detonated his bomb. Miraculously, all of the X-Men and Lawless survived the explosion, but Foolkiller was reduced to bones by the chemical sludge released by the blast. [X-Men 2099 #32-33] 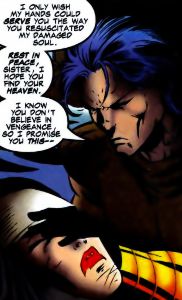 When the Phalanx moon moved into orbit around the planet, the tides shifted and sea level rose by nearly a kilometer worldwide. Caught between Atlantean sharktroopers and a doomsday prophecy related to the flooding, the Sisterhood of the Howling Commandments were massacred in Xi'an's absence. As he mourned yet another loss in his short life, Xi'an met up with Cerebra and Nostromo of X-Nation, who were trying to reach high ground. Nostromo was troubled by his techno-organic infection powers, which were reacting to the Phalanx presence. As Xi'an tried to heal Nostromo's injuries, the Phalanx responded violently through Nos, launching Xi'an and Cerebra back. After Nostromo regained his self-control, the trio made their way to the lead flotilla as the surviving Halo City residents fled in search of dry land. [X-Men 2099 #34-35, X-Nation 2099 #6]

The survivors of human civilization converged on the Savage Land, in the hopes of building a new society there. The drawbacks of the old society still existed, however, as humans with bigotry towards mutants survived the floods. As quakes ravaged the Savage Land, one man refused to even let Xi'an help save his family, proclaiming that humans could look after their own. [2099: World of Tomorrow #1] 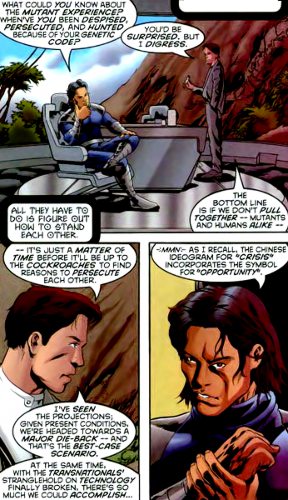 Tired of seeing friends and foes alike die to hatred or indifference, Xi'an retreated from the dream. He refused to take part in the leadership conferences being held, focusing on selfish but private pursuits such as expanding his own powers and connection to the spiritual world. While Victor Ten Eagles tried to convince Xi'an that man and mutant were worth protecting, and Morphine Somers sought allies as a Homo superior hardliner, Xi'an just wanted to be left alone. He became so disconnected from his empathy that he nearly let Cerebra die rather than use his healing touch to aid her. [2099: World of Tomorrow #2-4]

Xi'an was stirred back into action during the Phalanx invasion of Earth and the Savage Land encampment. Ten Eagles rallied the settlers to fight back against the Dreadnode enforcers, and Xi'an felt a renewed spirit in the aftermath. [2099: World of Tomorrow #6-8] The settlers eventually established Xavier City and, by the end of 2099, Xi'an was the city's representative to what remained of the world outside. He negotiated with Miguel O'Hara of Alchemax for the safe and public distribution of the metagene factor, among other rediscovered early-century technologies. Despite himself, Xi'an Chi Xan eventually overcame his personal demons and emerged as a true leader of men. His work ensured the rise of transhuman humanity at the end of the 21st century when it previously failed in the Heroic Age at the start, meaning by any standard he managed to live up to the dream championed by Xavier and Magnus. [2099: Manifest Destiny #1]