Center figure of this Family Tree is actually Mystique, though Nightcrawler’s foster family and
Destiny’s offspring are in it too. 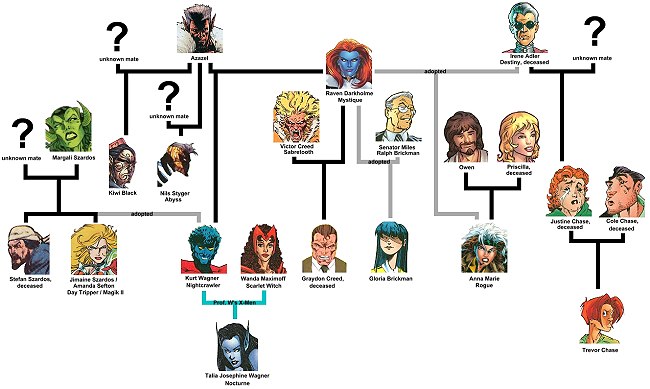 Sabretooth (1st series) #3-4 reveals that, during the days when Creed and Logan were in
Berlin as part of Team X, Mystique impersonated German spy Leni Zauber and had a brief
relationship with Creed. After she got what she wanted, she escaped and left the dead body
of the real Leni behind to ensure her cover. Only later did she discover that she was
pregnant. Surprisingly, their son, Graydon Creed, had no mutant powers at all and Mystique
shuffled him away to boarding school. The boy developed a hatred for both his parents.

Later on, in disguise, Mystique married a German count, Wagner, of course not out of love
but for wealth and power. In the coming months, she found herself approached by a
demonic-looking mutant named Azazel, who intrigued her. Mystique slept with him, willing
to leave her current position to be with Azazel, but he soon dumped her. When she discovered
that she was pregnant, she arranged for the count to die under mysterious circumstances, for
he would have known that he wasn’t the baby’s father. A few months later, when she gave birth,
the child had blue fur and looked like a devil. Due to the stress of the situation, Mystique
slipped and also reverted to her true form. The townfolk then hunted the “demons“ down
and Mystique knew of only one way to save herself. She morphed into a farmer and then
pretended to have thrown the blue woman off a cliff and having found her child. In front of
the crowd, “he“ then hurled the baby after her. [X-Men Unlimited (1st series) #4,
Uncanny X-Men #428]

It seems that Azazel rescued the baby from the waterfall and placed it with Margali
Szardos, a skilled magician, who was working at a nearby circus. Despite his strange looks,
she took Kurt in and Margali raised him like her own child. Kurt got along well with her kids,
Jimaine and Stefan, though decades later, when Stefan had become an insane killer, Kurt
accidentally caused his death, trying to prevent him from harming more people. Jimaine
created the cover identity of Amanda Sefton and, like before as Jimaine, she became Kurt‘s
girlfriend. After being with him for a while, she was convinced that it had been an
accident and she revealed herself to help Nightcrawler and the X-Men convince Margali
of Kurt’s innocence. [Uncanny X-Men Annual #4]

Rogue’s parents, Owen and Priscilla, married in a very early stage in their relationship
and went off to start a commune with a bunch of their friends, planning to go back to nature,
as was a common use in those days. Shortly after Rogue’s birth, Owen hired a shaman who was to
perform a ceremony during which he would he could enter a dreamland from Native American
mythology, the so-called Far Banks. Something went wrong, though, as Priscilla was taken
to the Far Banks instead, where her corporal existence ended. The baby was then raised by
Priscilla’s older sister, Carrie, before she would eventually run away from home as a
teenager. [Rogue (3rd series) #1-6]

Mystique and Destiny were hinted at being a gay couple for a long time. In Uncanny X-Men #265,
the word “leman“ is used; it is an ancient term for mistress or lover. Finally, the
opening text of X-Men Forever #5 fully establishes them as lovers. The couple took in
Rogue after she had run away from her father, with whom the girl did not get along. For
years, they acted as Rogue’s family and even helped her as best as they could when she
started to manifest her mutant power.

One of Mystique’s many aliases is that of senator wife Mallory Brickman. It is unknown if
there ever was a real Mallory Brickman but the couple’s daughter, Gloria, is adopted
anyway. [X-Factor (1st series) #139]

Unknown to most, Destiny too had a child, whose father has not been established so far.
Irene’s daughter, Justine, married a man named Cole Chase and, together, they had a kid
named Trevor. Living near Washington, Mystique befriended the Chases as Raven Darkholme
and had been watching over them after Irene’s death. However, to get revenge on
Mystique, Sabretooth killed the parents, while young Trevor was kidnapped and taken into
the Hound Program because of his reality warping powers. [X-Factor (1st series) #135,
137-138]

Years later, Azazel made a return. As it turned out, Azazel is one of several ancient
mutants who were perceived as demons and, therefore, were banished from Earth by a group
of “angelic“ mutants. Apparently, only capable of leaving his prison for brief instances,
Azazel was desperate to find a means to escape and hoped to father a mutant with the
power to set him and his friends free from the realm they were trapped in. Mystique was only
one of many women he had impregnated and, eventually, all his offspring were entranced to
come to La Isla des Demonas, from where they performed special ceremony to meet their father
in his realm. The X-Men followed, leading to a big confrontation between those loyal to
Azazel and others opposing him, not wanting to be exploited by him. While the dimensional
breach was closed again, several of Nightcrawler’s half-siblings were killed. The only
ones remaining are Genoshan mutate Abyss and a Maori named Kiwi Black. [Uncanny X-Men
#429-434]

In the alternate reality called Professor W’s X-Men, Nightcrawler got together with
the Scarlet Witch and they had a daughter, Talia Josephine, who later joined the X-Men
as Nocturne. Due to a ripple in time, she became unhinged from her reality and is now part
of the dimension-hopping Exiles. [Exiles #1, 4, 41-42] When the team visited the main
Marvel Universe, she even met her father’s counterpart and eventually, during the Exiles’
next visit, she was left behind - the main universe becoming her new home. [Exiles #30, 48]