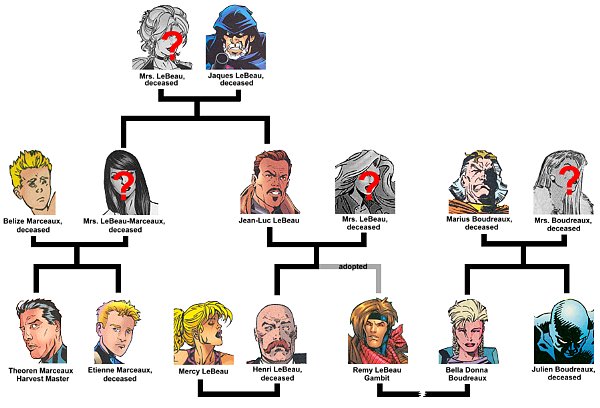 Jacques LeBeau was the leader of the Thieves Guild near the end of the 19th century. When the Thieves failed their benefactress, Candra, on a certain mission, she kidnapped Jacques’ son, Jean-Luc. However, Jean-Luc was saved from Candra’s clutches by a time-traveling Gambit. [Gambit (3rd series) #12-14]

Jean-Luc’s childhood friend, Belize Marceaux, at one point married a sister of his. By tradition, the position of Harvest Master was filled by a member of the Marceaux family, currently by Theoren, the only surviving son of the Belize. Young Etienne died on the day of his tilling, a guild ritual to mark adulthood. He and Remy broke into one of Candra’s houses but were caught and sold into slavery. Trying to escape from the Pig’s island, Etienne drowned. [Gambit (3rd series) #6, 12, 17]

Jean-Luc himself too had a son, Henri, who was trained in the thieving arts and one day would have become head of the Guild. Years later, when the Thieves learned of a child born with red eyes, Jean-Luc knew that he would grow up to be Gambit, his mysterious savior in the past, and managed to adopt him. The two brothers got along well. [Gambit (3rd series) #1, X-Men (2nd series) #33] Unfortunately, Henri was killed by members of the Assassins Guild [Gambit (1st series) #1], but he left behind a wife – Mercy LeBeau, who was the first woman ever to join the Thieves Guild. Although already in her fifties, thanks to the Elixir of Life, she doesn’t look older than her mid-twenties. [Gambit (3rd series) #17, 21]

When Remy was a teenager, he got to know Bella Donna, the daughter of Marius Boudreaux, the patriarch of the Assassins Guild. To achieve a peace between their Guilds, Jean-Luc arranged for them to be married when they were eighteen. Her brother, Julien, though, was against a Guild peace and challenged Remy for a duel. Remy won, apparently killing Julien, and though he had done nothing wrong, he was banished from the Guilds. [Gambit (3rd series) #1, X-Men (2nd series) #8]

Battling the alien Brood, Bella Donna spent all her energies and too was presumed dead, though both Boudreaux siblings survived. Bella Donna was left comatose, hovering between life and death, while Julien’s life had been saved by the Elixir of Life. However, Julien also experienced the potion’s unwanted side effects – addiction and disfigurement, which is why he started to wear a mask. Driven mad by withdrawal, Julien attempted to steal another flask of the elixir to be used on his sister, but his father killed the abomination his son had become. [Gambit (1st series) #1-4]

Indeed, the potion reanimated Bella Donna and, shortly afterwards, she even became head of the Assassins Guild after her father died of a mysterious heart attacked, no doubt orchestrated by Candra to better manipulate her. [Rogue (1st series) #1] For months, Bella Donna held a grudge against Gambit, even trying to kill him, but finally they settled their differences, resulting in a Guild unification. As she is constantly referred to as Gambit’s ex-wife, it seems that they were divorced off-panel.

With Candra gone, the guilds no longer have the Elixir of Life at their disposal and, after what happened to Julien, many of them probably wouldn’t even want to use it. Those definitely having used it are Jean-Luc LeBeau, Mercy LeBeau and Bella Donna and Julien Boudreaux. Belize Marceaux seems to have used it too, as he was still alive ca. 25 years ago to father Etienne (and he was already a teenager in 1891). His wife is a likely suspect as well, or else she must have been nearly 50 years younger than her brother, Jean-Luc LeBeau.