Written By:
Peter Luzifer.
Last Updated:
24th September 2006
(click on the image to see a bigger version of it) 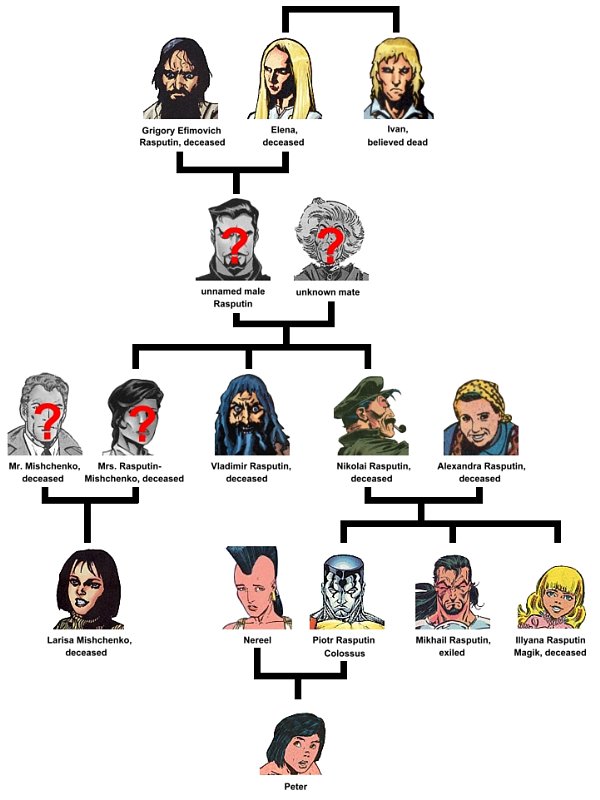 Professor Charles Xavier recruited Colossus into the X-Men in Giant Size X-Men #1. The same issue also introduced his younger sister Illyana and their parents. Piotr’s older brother Mikhail was first mentioned in X-Men (1st series) #99. He was a cosmonaut who apparently had died in a shuttle accident. However, years later, he was discovered alive. It turned out that the accident had been faked by a governmental agency who wanted to explore Mikhail’s mutant powers without having to deal with his family. [Uncanny X-Men #285-286]

When the X-Men visited the Savage Land, Piotr had his first sexual experience with a native girl named Nereel. [Classic X-Men #21] Years later, when the X-Men again traveled to the prehistoric area, Nereel had matured a lot, she was now leader of the tribe and had a son named Peter. Nereel did not openly tell Colossus that it was his son, and Piotr failed to recognize the many hints. His teammate Longshot knew, but he promised to Nereel to keep it secret. [Uncanny X-Men Annual #12, Uncanny X-Men #250]

Visiting her brother in the United States, little Illyana was abducted by the demon Belasco and spent seven years in Limbo while on Earth only seconds had passed. [Uncanny X-Men #160] As a teenager her mutant powers of teleportation manifested, and she also had magical skills from studying under Belasco. She joined the New Mutants as Magik, but months later, when Limbo demons were invading New York, she sacrificed her magical powers to close the doorway between dimensions. She was reduced in age, back to the seven-year old child she was supposed to be, and brought back to her parents. [New Mutants (1st series) #73]

When Russian agencies learned about Illyana and the powers she would wield again one day, once she was grown up, they killed Nikolai and Alexandra Rasputin and took the girl with them to experiment on her. Though too late to save Colossus’ parents, the X-Men at least managed to rescue Illyana from her pursuers. She was taken to the mansion in Westchester, where she was diagnosed with the Legacy virus. Shortly afterwards, she passed away. [X-Men (2nd series) #18-19, Uncanny X-Men #303]

Many months later, a cure for the Legacy Virus was discovered, though it came with a bitter price. It needed to be activated by a mutant power, killing the host in the process. Remembering how he was not able to save his baby sister Illyana from the terrible disease, Colossus couldn’t stand the thought of any other people dying while something could be done. He made a noble choice, as he sacrificed his own life by injecting himself with the serum. Overnight, the virus was cured worldwide. [Uncanny X-Men #390] Colossus‘ story didn’t end there, though, as an alien named Ord stole his body from the morgue. He revived Colossus with advanced alien technology and kept him locked up in a prison cell in his base, to run tests and experiments on him for several months, until he was found and rescued by the X-Men. [Astonishing X-Men (3rd series) #4-6]

More members of the Rasputin family were revealed during X-Men: Colossus Bloodline #1-5. While investigating a series of unexplained deaths, reporter Larisa Mishchenko made a startling discovery and asked her cousin, Colossus, to return to Russia. All of the victims were descendants of the same man, the legendary Grigory Rasputin, who also happened to be the great-grandfather of Colossus and Larisa. Apparently, the reports of Rasputin’s miracles were all true, the man having been a mutant with supernatural powers. Recognized as a carrier of the x-factor gene, Rasputin was approached by Mr. Sinister, by then known as “the pale man,“ who offered to create a bloodline from Rasputin’s genes that would lead to a race of superhumans. In order to build their breeding stock, they needed special women to carry Rasputin’s offspring. One of them was a girl named Elena from Siberia, who along with her twin brother Ivan possessed strange powers too, and used them to entertain people as performing artists. Rasputin impregnated not only Elena but fifteen to twenty other women as well, and Sinister would experiment with the unborn babies, some of them dying in the process. Not approving of his sister’s relationship with Rasputin, Ivan organized an assassination attempt on him, though he barely survived. In a mystical ceremony, Rasputin transferred his essence into his pregnant brides right before his death and promised to return one day, when the world was ready for him.

While visiting their mad uncle, Vladimir, Colossus and Larisa were approached by the mastermind behind the murders - Mr. Sinister, with Mikhail Rasputin in his company. Only recently, Mr. Sinister had learned that Grigory Rasputin’s comment was to be taken literally: his spirit had lived on and was making its presence known by influencing his descendants, which caused quite many of them to experience some sorts of mental problems or disorders. As time went by, Rasputin’s essence had been distributed between more and more of his descendants but, in order to resurrect him, the bloodline had to grow smaller again.

Sinister and Mikhail hunted down at least two dozen descendants of Rasputin, including Vladimir’s children Konstantin, Klara and Dimitriy. With each death, Rasputin’s influence over the remaining family members grew, and the fragments of his essence were to reunite within the last Rasputin to remain. As Larisa was murdered by Sinister, and Vladimir killed himself, apparently only Piotr and Mikhail remained. Sinister wanted them to duel each other to the death, but eventually Colossus got through to his brother and convinced him to end the fight. In order to make sure that Sinister could not resurrect the evil of Grigory Rasputin, Mikhail teleported himself to a dimension from which there is no return; meaning that one Rasputin is forever out of his reach.

Far away, in the Savage Land, young Peter was shown to sense the deaths of the other Rasputins, once more confirming him to be Piotr’s biological son, even though neither Colossus nor Mr. Sinister are aware of it.

Ivan was last spotted visiting his sister on her deathbed. This happened about twenty years in the past, which means that its rather unlikely that he is still alive, as he would have to be way over 100 years old by now.