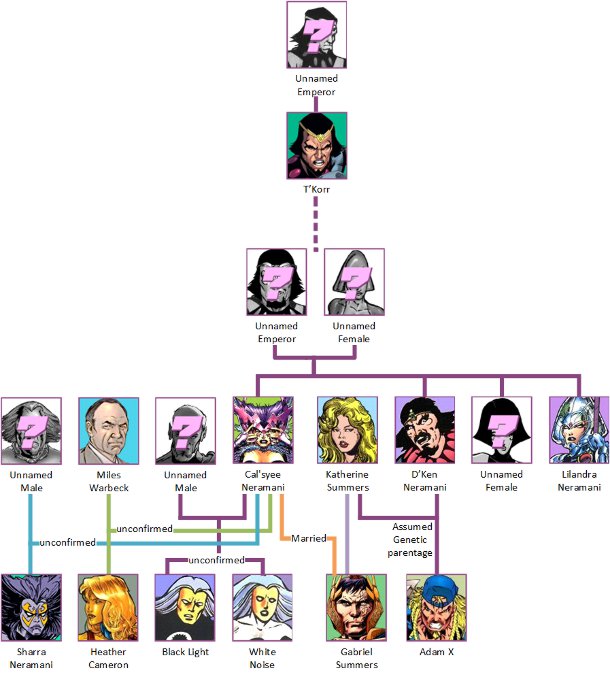 The earliest known Shi'ar empeor's are T'Korr and his father. It is unknown how many generations exist between T'Korr & the siblings D'Ken, Deathbird & Lilandra. Though approximately 400 cycles (which are assumed to be years) passed between then and now.

Deathbird, the first born hatchling, was exiled from the empire for having ferociously slaughtered both her mother and an unnamed younger sister [revealed in Ms. Marvel (1st series)#10, Uncanny X-Men (1st series) #156].

D'Ken, the second born hatchling was responsible for kidnapping Christopher "Corsair" Summers and his wife Kathernie to study. Prior to killing Katherine, D'Ken found that she was pregnant and removed the child sending him away to be raised a slave. That child would grow up to be Vulcan.[X-Men: Deadly Genesis #6]

The Shi’ar/human hybrid Adam-X, the X-Treme, believed himself to be a farmer’s son but learned from Eric the Red that he was actually the son of D’Ken, deliberately bred with a specific genetic potential. Speculation is that he is a product of D’Ken combining his DNA with Katherine Anne Summers (most likely through genetic engineering, as Katherine was already pregnant at this time with Vulcan) [Captain Marvel (2nd series) #3].

The two Imperial Guardsmen, Black Light and White Noise, claimed that Deathbird is their mother. Apparently, they were conceived during her exile from the empire [X-Men Spotlight on ... Starjammers #2]. Given her name (Sharra Neramani), her throwback features and the fact Liandra refered to her as her neice it is very likely Deathcry was also Deathbird's daughter [Chaos War: Dead Avengers #2]. During her stay on Earth it is believed that Deathbird also became pregnant by an Earth man and gave birth to a human-looking girl. Though the identity of this child is not known for certain, some evidence points to her being the X-Man called Lifeguard [X-Treme X-Men #5].

The Shi’ar Empire is a monarchy. The title “Emperor/Majestor” or “Empress/Majestrix“ has been passed down through genetic lineage to the firstborn child, or to the closest relative if the ruling person is without offspring. However after the Shi'Ar was absorbed into the Kree Empire, the role was given to the Strontian, Gladiator. Deathbird, as the eldest living member of the Royal family, could potentially lay claim to the throne as the rightful Shi’ar Majestrix.

Father to T'Korr, this unnamed emperor was responsible for inducting the Strontians into the Shi'ar Empire, saving them from the Wraith Plague.[War of Kings: Warriors #1]

The earliest named Shi’ar emperor ruled roughly 400 cycles ago. T’Korr, mistrusted the Strontians, fearing that they would one day use their awesome power to overthrow the empire. When the first Phoenix host wreaked havoc on the empire and it was decreed the Imperial Guard would be formed to face it, T’Korr saw an opportunity to bring the Strontian’s under heel. Known for their dedication to duty, T’Korr gave the Strontian Imperial Guard candidates a test: kill the Strontian Council of Elders. Candidate Kallark (who would later become Gladiator) complied, and became a loyal leader for T'Korr's Imperial Guard [War of Kings: Warriors #1].

Not much is known about the father of Deathbird, D'Ken & Lilandra other than he held the traditions of the Shi'ar Empire and apparently died peacfully [Uncanny X-Men (1st series) #156].

While normally the first born would become Majestor, Deathbird was exiled for killing her mother & an unnamed sister. It is assumed this occured prior to D'Ken becoming Majestor [revealed in Ms. Marvel #10, Uncanny X-Men #156].

D’Ken, the second hatchling, was named ruler and led the Shi’ar with a forceful hand. It is unknown when his reign began, but his earliest documented appearance are flashbacks of ca. twenty years in the past, during which Shi’ar troops captured Christopher and Katherine Anne Summers as Earth specimens. [Uncanny X-Men (1st series) #156]

Later, D`Ken thought to explore the power of the M’Kraan Crystal, but his younger sister Lilandra, serving as a Grand Admiral, opposed him. He framed Lilandra for treason and condemned her to death, but she escaped and made her way to Earth, where she enlisted the help of the X-Men. They made their way to the crystal just in time to repair it before it would have erased the entire universe. However, after D’Ken was exposed to its nightmare field, he went insane and fell into a catatonic state. [Uncanny X-Men (1st series) #107-109]

It took some time for the council of ministers to decide but, with D’Ken incapacitated, Lilandra was cleared of her charges and became the next Shi’ar Majestrix. [Uncanny X-Men (1st series) #109, 118]

A few months later the exiled Deathbird, allied with the Brood, arranged for Lilandra and the X-Men to be kidnapped and taken away to Brood space, to become the insectoids’ new host bodies. Even though they managed to escape, Lilandra chose to stay on Earth at Professor Xavier’s side to watch over her lover‘s recovery from the Brood infection, fully aware that this would provide Deathbird with enough time to strengthen her claim on the Shi`ar throne. [Uncanny X-Menn (1st series) #167] By the time she and the Starjammers departed to space, it was already too late and she was now considered the rebel.  [Uncanny X-Men (1st series) #177]

After successfully wrestling control over the Shi’ar Empire while Lilandra was on Earth, Deathbird ruled the Empire with an iron hand and battled Lilandra and the Starjammers various times.

When Deathbird discovered that the Starjammers had been replaced by a group of Warskrulls intending to take over the Shi’ar Empire through Lilandra, she alerted the X-Men. After the Warskrulls were defeated and the Starjammers released, Deathbird gave up the throne to Lilandra. During her time as ruling Shi`ar Majestrix, she had come to hate the responsibilities of maintaining the needs of the Empire. [Uncanny X-Men (1st series) #274-277]

Lilandra served as Majestrix again for several years, seeing the empire through such trials as a major war with the Kree (after which she named Deathbird viceroy of the Kree) and the manipulations of Cassandra Nova. Nova devastated the empire and shattered Lilandra's mind, leaving the empire at the mercy of a manipulative secret order while she recovered [Operation:  Galactic Storm crossover, New X-men (1st series) #117, 121-126].

Many years after his encounter with the M’Kraan Crystal, D’Ken was revived from his catatonic state by the mutant Vulcan. D’Ken reclaimed his throne and married Vulcan to Deathbird as thanks. However, Vulcan betrayed him and killed D’Ken immediately after. [Uncanny X-Men (1st series) #480-486]

After taking the throne for himself, Vulcan and Deathbird, led the empire into a new age of aggressive expansion.  Lilandra led a rebellion against them and although close to reclaiming the throne was killed. [X-Men: Kingbreaker #1-4,Uncanny X-Men (1st series) #485-486, X-Men: Emperor Vulcan #1-5]

Vulcan’s aggression and lust for power would eventually prove his undoing when he instigated a war with the Kree. At the culmination of the war, Vulcan was killed in a battle with the Kree’s leader, the Inhuman Black Bolt. The Shi’ar subsequently surrendered to the Kree and were absorbed into the Kree Empire. [War of Kings Crossover]

The Inhuman royal family broke with Shi'ar tradition and named Gladiator as the new Majestor of the Shi’ar although he would still report to the Kree leaders. At some point after the war with the Cancerverse, the Shi’ar were apparently freed from their subservience to the Kree, though this has yet to be explained.