The Shi'ar, having reached spaceflight thousands of years ago, are far beyond the technological levels of Earth.  Intergalactic space travel, via faster than light capable starships and stargates, teleportation, hard light holograms, cloning and genetic engineering are just some of the technological feats the Shi'ar are capable of. Their weapons technology ranges from simple handheld energy based weapons up to the devastating galaxy destroying Nega-Bombs.

Empress Lilandra's close relationship with Professor Xavier, and later Emperor Gladiator's friendship with the X-men, has lead to the mutant team adopting their technology into their own facilities, most notably in the Danger Room. 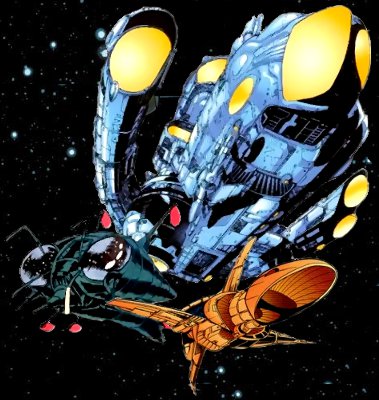 The Shi'ar have used various designs for their starships and spacecraft, including the enormous Apocalypse-class flagship.

However, the most distinctive ships that the fleet uses are the small scout ships that resemble Earth insects.

Stolen from the Shi'ar Empire, Corsair dubbed their interstellar pirate ship the Starjammer, after the sailing ships on Earth known as windjammers. Its ultra-light drive enabled Corsair and his companions to traverse large distances quickly, even the vast distance between Earth and Shi’ar space. The ship has served the group well over the past two decades, despite having been repaired or rebuilt on a number of occasions.

When the X-Men had to travel to Shi’ar space to stop Vulcan’s murderous rampage, they had little options available to them. They raided an abandoned base once used by Erik the Red (Davan Shakari) and acquired an old Shi’ar ship, which they dubbed the X-bug, due to its scorpion like appearance. Records in S.H.E.I.L.D files speculated the ship was a first generation starcraft, due to its primitive technology when compared to other Shi’ar ships. The X-Bug was destroyed when it crash-landed back on Earth. 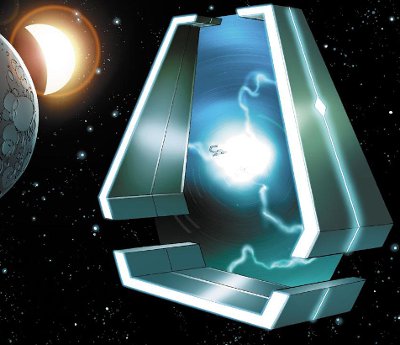 Due to the sheer size and vastness of the Shi'ar Galaxy, the Shi'ar have utilized some very advanced technology to create "Stargates" to help them fly from one place to another within Shi’ar space.

These stargates are heavily guarded so that they could not be used by enemies of the Shi'ar and are dispersed throughout the Shi'ar galaxy at suitable junctions so that space travel time can be greatly reduced. Once a ship has entered into a star gate, it will enter some form of hyperspace to emerge at the target Stargate a short while later. It is not known precisely how stargate navigation is achieved, however the stargates have pre-defined routes that will send a ship to a specific exit stargate. 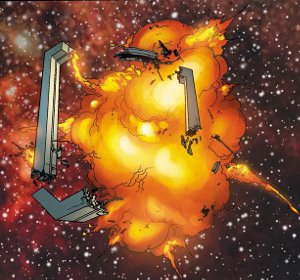 It is common knowledge amongst the Shi'ar as to where in the known universe each stargate will take them to. Having said this, it is possible for a starship to alter the destination stargate to which they will be sent but it requires some time to re-calibrate the gate to do this. [Uncanny X-Men (1st series) #200-201]

When the powerful rogue mutant Vulcan entered the Shi’ar Galaxy on a mission of revenge, he destroyed numerous stargates. This temporarily crippled the empire and it greatly restricted their ability to travel quickly throughout the territory. The Shi’ar eventually managed to repair the stargates.