Written By:
Peter Luzifer.
Last Updated:
28th April 2008
(click on the image to see a bigger version of it) 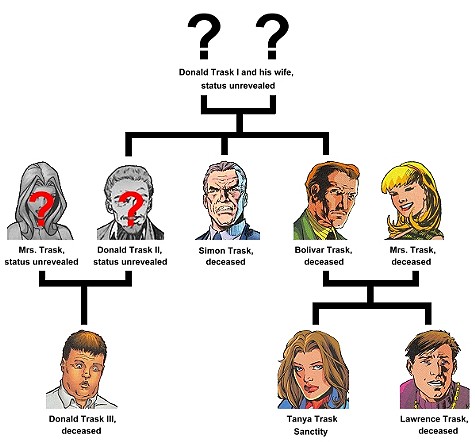 Anthropologist Dr. Bolivar Trask was enjoying his life as a loving husband and father up until the day when tragedy struck and his wife died in some sort of accident. What made this day even more outstanding, though, was that their five year old son, Lawrence, nicknamed “Larry,” had foretold the exact hour of his mother’s death. Realizing that his son was apparently a mutant with the power of precognition, Dr. Trask designed a device to suppress Larry’s powers as well as his memories of them. It was built into a medallion that Bolivar Trask made Larry swear to never take it off by his mother’s deathbed. Unfortunately, Bolivar Trask could not build a similar device for Larry’s older sister, Tanya, when she manifested her own mutant powers. Hers too was a chronal ability - she found herself phasing out of synch with time. Just like her brother, she could not control her gift and each time she was away for longer and longer, until she ended up fully stuck in the timestream, unable to return.

The fate of his family made Dr. Trask wary about mutants. Every now and then, he would remove his son’s medallion, to learn more about mutants from Larry’s brief glimpses into the future. Each of these sessions ended with Trask placing the amulet around his son’s neck once again, making him forget what he has seen. Bolivar Trask, though, would not forget and he feared that one day other mutants would recognize his son for one too. Wishing to protect his secret, Dr. Trask dedicated his life to find a means to locate and neutralize all mutants, and over the course of many years he engineered the mutant hunting robots called Sentinels. Ironically, his son helped him in that task. [X-Men (1st series) #59, Uncanny X-Men #minus 1]

Eventually, Dr. Trask received funding for his Sentinel project and he introduced them to the public during a televised debate with Professor Xavier. However, as Dr. Trask was an anthropologist and no expert in robotics, he had made a grave error. Designed to think for themselves and to adapt to any circumstances, the Sentinels found that to best way to protect humanity was to rule them. Immediately, they disobeyed their creator and tried to force him to create more of their number. When the X-Men battled the mutant-hunting robots, Dr. Trask realized how wrong he had been about mutants, and he ended up sacrificing his life in an attempt to destroy the robot enclave he had created. [X-Men (1st series) #14-16]

Larry Trask was in college at the time, and he later picked up his father’s legacy, blaming mutants for his death. In order that they would not rebel against humanity again, Larry modified the robots to be loyal to his commands. However, as soon as someone ripped the medallion from his neck, the Sentinels recognized him for the mutant he was and no longer followed his orders. [X-Men (1st series) #57-59] The X-Men outsmarted the Sentinels that time but, when they re-surfaced, Quicksilver of the Avengers enlisted Larry’s help. The whole time, Larry was plagued by a vision of a black void, and he actually foresaw his own death as he was crushed underneath a falling Sentinel during the battle. [Avengers (1st series) #103-104]

Years later, Simon Trask, a brother of the late Bolivar, made his presence known. He hated mutants even more than his predecessors, but unlike them, he didn’t consider the Sentinels to be the right means to oppose the “mutant menace”. Instead, he started a fanatic anti-mutant movement called Humanity’s Last Stand, and rallied baseline humans into a joining the ranks of his ever growing organization. [Uncanny X-Men Annual ‘95] Simon Trask didn’t stop there, though, he tried to stir up anti-mutant hysteria by creating a fake Mutant Liberation Front that performed acts of mutant terrorism. Actually though, the members of that group were Trask's own followers wearing technological armors that mimicked mutant powers. These efforts were stopped by the Punisher and the X-Cutioner. Simon Trask died when he blew up his own base, trying to become a martyr for his cause. [Punisher (3rd series) #12-17]

While it seemed to be the case that the story of the Trask family was done with, several months later, Cassandra Nova tracked down the nephew of Bolivar Trask, who was running a dental practice in Albuquerque. The villainess pretended to be a government agent when she contacted Donald Trask, and apparently she tried to rattle him to join a relaunched Sentinel program. Actually, though, she only needed him around to completely analyze and copy his genetic make-up. Once that task was complete, Cassandra injected herself with the copied DNA, killed Donald Trask and assumed command of a wild breed of Sentinels. Considering that Cassandra Nova addressed him as “Donald Trask the Third,” there stands good reason that there were also a Donald Trask I and Donald Trask II, apparently the dentist’s father and grandfather. [New X-Men (1st series) #114-115]

Trapped in the timestream, Tanya was eventually found by Rachel Summers pulled “to shore” in the Askani future. There, she became one of Rachel’s first followers in the Askani sisterhood and she adopted the codename Sanctity. However, the year long imprisonment left her somewhat imbalanced. At one point, she traveled back to the past and tried to convince her father not to build the Sentinels, but Rachel stopped her friend from endangering the entire timeline by altering it so drastically. In the Askani future, Sanctity outlived even Rachel, aka Mother Askani, and by the time she was about 100 years old she tutored Aliya - the future wife of Cable, the legendary Askani‘Son. However, when Sanctity encountered Stryfe, she recognized his similarity to Cable and joined forces with him, abandoning her Askani teachings. [Uncanny X-Men #minus 1, Askani’Son #1-4]

Since then, the Askani timeline has been erased as a possible future for the main reality. What, if any, effect this change had on Tanya’s life and experiences remains to be seen. As a chronal anomaly, Tanya’s friend Rachel was “rebooted” to her former self and she washed up somewhere and somewhen else. Applying the same to Tanya, she might still be a young adult stuck somewhere in the timestream, waiting for someone to recognize and rescue her.