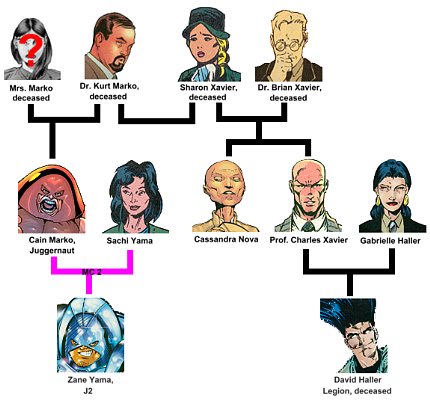 When Charles Xavier was still a child, his father Dr. Brian Xavier had been killed during a lab accident at the nuclear planet in Alamogordo, New Mexico. His colleague Dr. Kurt Marko could have saved him, but chose not to, as he wanted Xavier’s fame and fortune for himself. He comforted Xavier’s widow Sharon and soon married her, becoming the stepfather of young Charles. A short while later, Cain Marko, a son from a former marriage showed up. He got expelled from school and now he had to live with them. Soon it became clear that Kurt did not really love Sharon, and she died of a broken heart. Charles was left alone with the two Markos. One day he overheard a conversation in a lab during which Cain accused his father of having created the accident on purpose to gain Xavier’s fortune. Charles came out of his hiding place and a fight started. Some lab equipment broke apart causing and explosion and a fire. Kurt Marko pulled both boys out of the room shortly before dying of having breathed fumes and fire. (Uncanny X-Men #12)

During the time, Xavier and Eric Magnus Lehnsherr worked at a hospital in Israel the got to know Gabrielle Haller. The young girl had been traumatized by her experiences in the concentration camp at Dachau. Xavier used his telepathic powers to get the woman out of her catatonic state and soon they fell in love. (Uncanny X-Men #161) When Xavier later left Israel to continue his journeys, he had no idea that Gabrielle was pregnant with his child. Only years later when the autistic boy developed his vast mutant abilities she contacted at first Moira and through her later Xavier for help. (New Mutants #1, 26)

It was recently discovered that Professor Xavier was actually to have a twin sister, but the two babies already fought in the mother’s womb. Cassandra tried to strangle her brother, but Xavier unleashed a powerful psychic blast to drive her away. However Cassandra survived and was born without a body. Formless, immense and totally unique, Cassandra is composed of living emotional energy. The appearance of her body, is a mental copy of Xavier's cells that is merely mimicking human traits. (New X-Men #121-122)

In the MC2 alternate timeline, Juggernaut reformed and married district attorney Sachi Yama. Their son Zane inherited some of his powers. (J2 #1) Cain Marko even met Sachi Yama in the main Marvel Universe, but so far he hasn’t shown any romantic interest in her. (X-Men Forever #6)