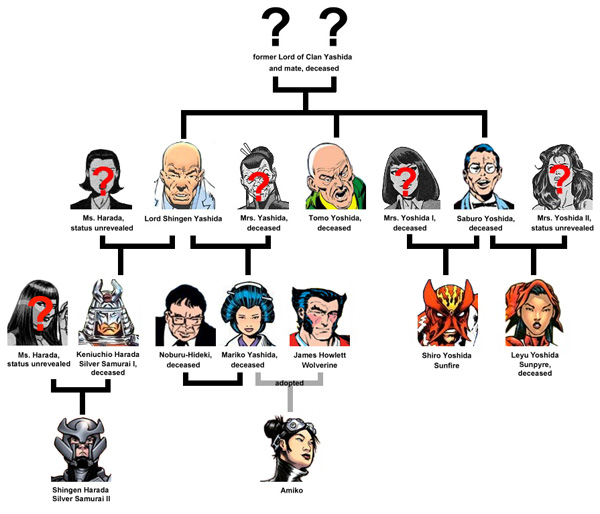 (click on the image to see a bigger version of it)
First, to clarify, Yashida and Yoshida seem to be different spellings of the same name. While in his first appearance Sunfire was called Shiro Yoshida, in the story arc that introduced Mariko his name was spelled Yashida, and this version of the name was carried on in the woman’s next appearances. Although probably a typo, it actually doesn’t technically have to be a mistake, as either version of the name could technically be a legitimate transliteration from the original Japanese writing to the Roman alphabet.

Shiro Yoshida is the son of Saburo Yoshida, a wealthy political figure who wanted Japan to move past the hatred towards the United States fostered during World War II. His brother Tomo, however, was not as liberal, and hated all things Western. Because of Saburo’s busy schedule spreading goodwill between the nations, Tomo raised his nephew and passed on his hatred to the young man. Eager to please his uncle, and feeling neglected by his father, Shiro readily accepted Tomo’s views. When his mutant power of atomic flame developed, Tomo taught Shiro in the use of his power. He also constantly reminded young Shiro that his mother had been near Hiroshima when the nuclear bomb detonated in World War II, which led to his mother dying while giving birth to him and his own mutant powers. Giving him the identity of Sunfire, Tomo tried to use Shiro to strike out at America. Eventually though, when Tomo shot his brother Saburo, Shiro avenged his father’s death by rejecting his uncle’s influence and killing him. [X-Men (1st series) #64]

Although it was hinted that Sunfire’s mother’s genes might have been responsible for his becoming a mutant, it actually seems to be the case that the mutant gene ran through the paternal side of his family. Not only is there his younger half-sister, Leyu, who born of a different mother has exactly the same powers as he [Uncanny X-Men (1st series) #392], but also Sunfire’s paternal cousin the Silver Samurai became a mutant as well.

During one of the X-Men’s adventures, they visited Sunfire in his ancestral home, where they were also introduced to his cousin, Mariko. Wolverine immediately fell for the shy beauty, not suspecting that actually she, and not her cousin, was heir to the Clan Yashida. [X-Men (1st series) #118-120]

The love of Logan and Mariko grew, but as with almost every relationship, they had some obstacles their way. For them, it was the sudden return of Mariko’s believed-dead father, Lord Shingen. Being the rightful lord of Clan Yashida, Mariko was honor-bound to his will, and could do nothing but helplessly watch when Shingen allied the Clan with several criminal organizations of Japan’s underworld. Even worse, Mariko had to agree to being married to a man whom Shingen owed a favor, Noburu-Hideki. Noburu was a petty man who regularly beat his new wife. Learning of all this, Logan traveled to Japan in order to rescue his love, and eventually succeeded. While Logan killed Lord Shingen in a fair duel, Noburu-Hideki was killed by Logan’s ally, Yukio, when he tried to use Mariko as a human shield. [Wolverine (1st series) #1-4]

Shingen’s death shook up things at Clan Yashida, as several of his criminal allies trying to wrest control over the Clan from Mariko. One of these forces happened to by Shingen’s illegitimate son, Keniuchio Harada, aka the Silver Samurai, and his partner, the Viper. Happening to be in Japan due to the imminent wedding of Logan and Mariko, the X-Men aided her against the two villains. However, once they were dealt with, Mariko called off the wedding, declaring Wolverine not worthy of her. Although it was later uncovered that she had been influenced by Mastermind, she still refused to marry Logan, for now she felt unworthy of him and realized she had to prove herself by cleansing Clan Yashida of all criminal activities – a near impossible task. Nevertheless, Mariko insisted she would only be worthy of marrying Logan once Clan Yashida’s honor was restored, and so Logan reluctantly agreed to support her decision. [Uncanny X-Men (1st series) #172-173]

Mariko’s rule as head of the Clan Yashida was firmly established after this, as both Sunfire and Silver Samurai were shown bowing to her wishes as their superior in the Clan. During another of the X-Men’s adventures in Japan, Wolverine promised a dying woman that he would take care of her daughter, Amiko Kobayashi. Knowing that the X-Men’s hectic and dangerous life was not the most ideal upbringing for the girl, Logan placed her with his love Mariko, hoping that one day they could be an actual family after she had completed her pledge. The legal status of this “adoption” was never confirmed, though. [Uncanny X-Men (1st series) #181, Kitty Pryde and Wolverine #6]

Many months later, it seemed that Mariko had the chance to get rid of the criminal influence on her Clan. The Hand, represented by Matsu’o Tsurayaba, offered to sever all ties in exchange for one of Mariko’s fingers. However, not inhibited by such a strong sense of morals and honor, the blade Matsu’o sent to Mariko was poisoned. His ambassador, blind Reiko, had built up a tolerance to the poison, and demonstrated its “harmlessness” by stabbing herself with it. With one knick, however, the blowfish toxin began to burn through Mariko’s system, and the damage was done. As the toxin started to show its painful effects, it was already too late to save her. Mariko’s last request of Wolverine was to not have to suffer for long, and he used his claws on her for a mercy-killing. [Wolverine (2nd series) #56-57] In the wake of Mariko’s death, little Amiko was placed with Logan’s old friend, Yukio.

Death seems a common occurrence for the members of Clan Yashida. Sunfire’s younger sister Sunpyre, aka Leyu Yashida, died well before her time. She was killed by Mystique’s allies, who had undermined Banshee’s X-Corps, of which Leyu was a member at the time. [Uncanny X-Men (1st series) #405] Lumina, the princess of the Microverse world of Coronar, would later become Sunpyre II of Big Hero 6, but otherwise had no connections to the Clan Yashida.

The Silver Samurai also faced death and eventually lost. Somewhat redeemed by his half-sister’s influence, Harada attempted to remain honorable for a time as the new head of Clan Yashida, but he often drifted back into the criminal realm. This was particularly true after the mutant Blindspot removed his memories of the last few years, wiping away the personal growth he had experienced since Mariko’s death. The Silver Samurai took over the Yakuza clans of Tokyo, and forced them all under the banners of Clan Yashida. [Rogue (3rd series) #7-10] The memory loss did not permanently affect his innate sense of honor, however, and Harada began drifting back towards the light in his final days. What side he would eventually have ended up on became a moot issue when the Red Samurai of the Red Right Hand attacked Clan Yashida to gain vengeance on Wolverine and all his allies. Kenuichio Harada killed all the invaders in a brutal conflict, before ultimately dying from his own injuries. [Wolverine (4th series) #1]

Unbeknownst to anyone, Kenuichio Harada had produced an heir years before his death. The teenaged Shingen “Shin” Harada was no mutant, but instead a technological genius who constructed his own highly advanced samurai armor. More of a carefree rogue than his father, Shin began romancing his one-time adopted cousin, Amiko Kobayashi, until reality struck him square in the face. With Kenuichio’s death, control of the powerful Clan Yashida passed to Shin, and a gang war brewing between the remaining Yakuza and Hand factions meant no one could remain neutral for long. In exchange for a pledge of Amiko’s safety, young Shingen threw the support of Clan Yashida behind Sabretooth and Mystique, who had taken over the Hand and most of the Japanese underworld. Misunderstanding his motives for siding with such villains, Amiko ended their relationship and threatened his life. As the new Silver Samurai, Shin is now part of an interlocking cabal of villains including the Hand and the Hellfire Academy. [Wolverine (2nd series) #300-303, Wolverine and the X-Men #31]

What none of the principals are apparently privy to was the recent resurrection of Shingen Yashida by the Hand. The former head of the Clan Yashida was resurrected by Hand mysticism thanks to the priestess, Phaedra. She employed Shingen in a scheme against Wolverine alongside the Angel of Death himself, Lazaer. Despite the scheme’s failure, Shingen remained alive at its resolution, and may one day returned to claim his throne from his illegitimate grandson and namesake. [Wolverine (3rd series) #57-61]

Finally there are two cousins which are uneasy to place, namely Sunfire's cousin Yoshi (along with Yoshi’s mother), and Ichiro, a cousin of Mariko. Neither of their last names have been revealed, making it hard to tell whether they come from the paternal or maternal side of Mariko or Shiro's families.

The easier one first, it seems that Ichiro is not a Yashida, but is the offspring of a sibling of Mariko's mother. In his time of need, he asks Logan for help, a complete outsider. If he were a Yashida, and as such related to the Silver Samurai and Sunfire, he surely would have asked them first. Also his profession as a driver and him being poor indicates him not being a member of the wealthy Clan Yashida. [Wolverine (3rd series) #20]

With Yoshi, it's not as simple. The poor guy was addicted to drugs and made huge debts with some crime lords, debts that his cousin Sunfire had to pay off by doing some dirty work for the men. When first seeing the slums in which Yoshi was living, Sunfire said that he should not be reduced to living like that, as they were both part of a wealthy family, hinting towards this cousin possibly being Tomo’s son. Then again, Yoshi's mother living in a small apartment in Tokyo didn't leave the impression of her being that rich. And, would anyone really name a child Yoshi Yoshida? Whatever the case, Yoshi died when Sunfire made him face the truth about his addiction, thus removing him from his endless circle of debt. [X-Men Unlimited (1st series) #34]