Introduction:
In early March of 2008, we here at the UXN began to discuss what joke if any we might play on our regularly visiting audience for April Fools’ Day. A few ideas were bandied about (one or two of which may pop up in the future) but when two of our number, Peter Luzifer & Binaryan, came up with a very similar idea, it was decided.

Basically, we decided to take an idea that seemed completely believable – such as Marvel deciding to follow-up their two X-Men Phoenix mini-series with a third – and pretend that Marvel graced us with an exclusive interview to announce it. Thankfully, our fans are kind enough to us that this did not immediately make them realize it was a charade.

The interview on the first page of the “article” was carefully written, re-written & tweaked to tread carefully the line of believability that it was real (with a few odd questions & responses to make one wonder), so that the second page… we could lower the boom.

Here is what was posted on the Front Page:

Phoenix to return in August !!!

And here is the interview, which is followed by the revelation of the joke on page two:

UXN: First, before we start, we would like to thank you for the chance to do this exclusive interview. It's quite a big deal for us that you chose the UXN to announce the new series.

Alonso: Sure, why not? We usually make announcements with Newsarama, The Pulse or at convention panels, but why always go the route of “the professional” site?

UXN: So, Phoenix – Birthsong, it is. What can you tell us about the series?

Alonso: Just like the two prequels, it will be a five issue limited series, starting this August, with Greg Pak writing it and a yet to be announced artist joining him. It's neither Greg Land nor Tyler Kirkham, who worked on Endsong and Warsong, as we thought it better for each of the three series to have its own unique look.

Pak: I can only tell you that I was blown away after I had seen the new artist's first few sample pages. I wasn't that familiar with his work, but his style perfectly fits the mood of the series. 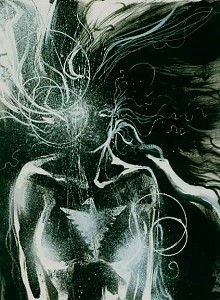 UXN: As you already mentioned the two previous series, do you think there is a danger of “dipping into the same well” too many times? After all, the first miniseries, Phoenix Endsong, was supposed to have been the ultimate and final Phoenix story. Then there was Warsong… and now this series.

Alonso: Well, what we have tried to make sure is that we are going into new, uncharted territory. That is how we have convinced Marvel to do this. We’ve seen the same stories before. Jean Grey dying…

Alonso: Then coming back…

Alonso: Then coming back, only to die again.

Alonso: So when we sat around to come up with a new story, we wanted it to be something that no one has seen before and will create a buzz not seen about the Phoenix since Jean died the first time.

UXN: You really think this will be that shocking?

Alonso: I think so. The Internet may not break in half, but its edges will definitely get frayed.

UXN: You are being mysterious. Can you give more details?

Alonso: Sure, though I’ll save the biggest part for the end. First, to give it context, let’s point out the things that we wanted to address and/or resolve – those pesky questions that were left unanswered. What exactly happens in the White-Hot Room? Why does the Phoenix use different avatars over the years, especially if she is capable of resurrecting her previous hosts? Who decides what's in need of "being burned away because it doesn't work?"

Pak: I didn't touch any of this with Phoenix – Warsong; there I rather used the Phoenix as a means to tell the Cuckoos origin. But now, all these questions and more will be answered. While set in the present, you may consider Birthsong in many ways as Phoenix: Chapter One.

UXN: Sounds promising. With the series being named Birthsong, and a mutant birth having recently occured at the start of Messiah complex, can we assume that the two events are related? Is that baby Jean reborn, or at least the new Phoenix?

Alonso: Sorry, but you'll have to understand we can't answer this without spoiling the events of upcoming issues of Cable.

UXN: Can we at least ask about some other characters and whether they will appear or not?

Alonso: Sure, go ahead.

Pak: A brief cameo appearance maybe, but otherwise, no.

Pak: No. They were involved in the other two series, but that's it. Most of the story will not happen on Earth. In the start of the series, the X-Men are given the option to send three emissaries into space to be part of a certain meeting. A bit jealous, Emma will not want Scott to go, and actually they have other responsibilities.

UXN: So who do the X-Men send instead?

Pak: Storm, Nightcrawler and Wolverine are chosen, because they served together on the team with not only one but both Phoenixes, Jean and Rachel, and they are the ones most closely attached to them. (Kitty Pryde not withstanding, as she wasn't available to be used) 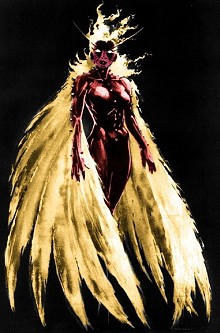 UXN: Wait, they are going into space – will Rachel finally appear in your series?

Pak: Yes, though not in the role readers might expect.

UXN: What about Korvus?

Alonso: A Shi'Ar warrior who carries the blade of the Phoenix.... not that it matters. Obviously he won't be in it.

UXN: How about some cosmic characters or higher beings of the universe?

Pak: Yes, there'll be some of the series, just like some other alien races will be asked to send a group of emissaries to the great gathering as well.

UXN: And when's the series being published?

Alonso: We are aiming for a bi-weekly schedule, the first two issues being released in August, #3 and #4 being due in September and the conclusion hitting the store in October. But, you know, that's not all.

UXN: Okay. Our time is almost up. Time to spill the beans for the big secret.

Pak: Indeed – so here we go: We've seen several different Phoenixes before, good, Dark Phoenix, even Bald Phoenix. We also learned from the White Hot Room that the aspects of Phoenix can be legion. So, we wanted to reflect something different. A little more diverse.

Alonso: No, not in that sense. One of the things that non-comic readers, and even some comic readers, complain about is that our characters are so unrealistic, body wise. Every male character has huge muscles, while all female characters have an unrealistically large chest. Likewise, both genders almost universally have the flattest stomachs and tightest abs possible.

Pak: Keeping that in mind, we wanted to focus on the “hunger” aspect of the Phoenix Force. The Phoenix after all “consumes” energy, much in the same way as Galactus. I don’t know about you, but if I consume too many pizzas, I’m not going to maintain that physique too much longer.

Alonso: So, after much discussion…

Pak: Much, much discussion!

UXN: So… what are you saying? Phoenix…

UXN: All right. Phoenixes… are going to be…

Pak: I think we’ve said enough for now! Take a look at the image we’ve provided. If a picture is worth a thousand words, it should answer quite a few questions!

Alonso: And create a thousand more!

(continued on next page)