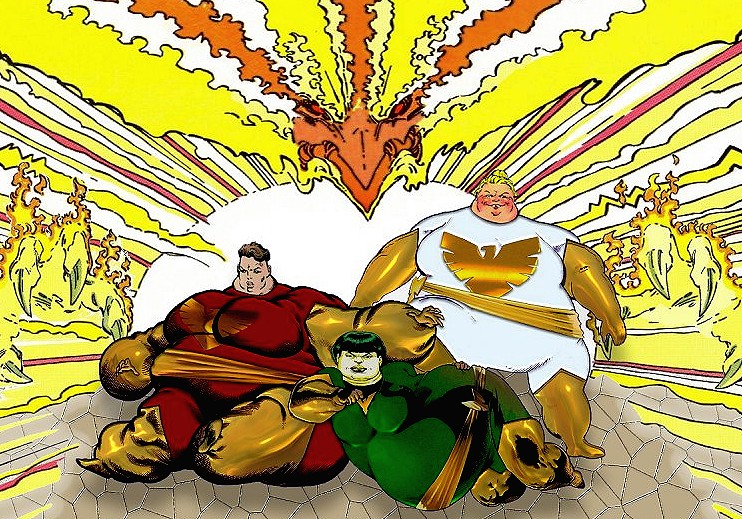 Alonso: As an added bonus for news, we’re also going to announce a one-shot follow-up to Phoenix - Birthsong. When we let him in on our idea, Dan Slott practically begged us to allow him to write a humorous, “musical” follow-up which he has aptly named “Phoenix: It's Not Over Before The Fat Lady Sings.” This one-shot will feature Pink Pearl, Big Bertha and Miss Mass competing against each other for the mantle of Phoenix. For obvious reasons, this issue will be done in the horizontal Marvelscope format that was last used for the 2001 Annuals.

UXN: Gulp. That's a bunch of ladies I wouldn't want to have a run in with.

Pak: Neither would we.

Alonso: Sure. The one-shot will be on sale six months after...

(The below was in written in white font and only visible upon being highlighted.)

If you haven't realized it by now, the entire interview was nothing but an April Fools' Day joke. If Marvel has indeed any plans for a series called X-Men: Phoenix – Birthsong or a humorous one-shot as described above, we knew nothing about it.

The first two images used along the interview were "borrowed" from other websites. Frankly, we couldn't ask for permission without having to reveal the purpose what we'd want to use the images for (and thus spoil the joke). Originally created by Stuart Saygner and Alan Davis, the two pictures can be found here:
- http://www.comicartfans.com/SketchbookMonth.asp?GSub=8642
- http://www.comicvine.com/marvel-girl/3566/

The final image was specifically created for this April Fools’ joke and is a massively recolored and photo-shopped collage of several different scans. Pink Pearl was taken from the cover to Alpha Flight (1st series) #22. Miss Mass' head stems from Alpha Flight (1st series) #111, last page, while her body is actually that of Belle from the X-Ranch, as seen in Uncanny X-Men #399, page 7. The full body-shot of Big Bertha was found in the Deadpool/GLI Summer Fun Spectacular, page 15. The sashes and Phoenix logos are from several panels of the Phoenix Endsong limited series. Finally, the Phoenix effect in the background was taken from the inside cover of Classic X-Men #9.

Final Words:
As always, after the release of the April Fools’ Day joke, we UXN contributors eagerly awaited the replies in the Feedback section of our Forum. We were pleased that the response was generally favorable and that a few people were admittedly fooled. However, the most satisfying responses were those from people who said that they visited the site specifically on April 1 to see what we had planned. Indeed, no greater praise could have been made.

Lastly, while the source of the images was provided above, giving the source sites proper credit, I myself would be lax to point out the incredibly above-average image manipulation by image gurus Peter Luzifer and Binaryan. Together, the two are responsible for most of the incredible image modification seen on the site. In addition to the images here, Peter Luzifer is also responsible for most of the text of the interview, with a little touch-up from me.

See you next year…