In full disclosure, this year’s April Fool’s gag came down to the wire. We began throwing out ideas around mid-February, but nothing really seemed to grab the group. However, when it was noticed that April 1 was the day after the return of HBO’s hit series “Game of Thrones” and an idea of the site’s focus switching from the world of the X-Men to that novel & TV series was suggested, the few of us who were fans of the “Ice and Fire” series were quite excited and honestly started planning before others could object.

The core of the gag was we would announce that the site was officially in transition, because all of us had lost interest in the X-Men comics and wanted to change focus on something that “REALLY mattered.” The initial concept was to be an official “announcement” with a new logo, headshots for Character Profiles/Spotlights and the Latest Site updates box to be filled with faux article links. Sixhoursoflucy provided these images, but Dean Clayton came in later and expanded the images to reflect the recent articles mentioned in the Latest Site Updates. He even provided multiple, rotating banners for the major “Houses” of the fictional land of Westeros, placing them in the upper left hand corner. Text for the announcement was written by Douglas Mangum.

Here was the announcement itself:

First, thanks to all who have been with us over the years. You've been through Event Months, lean times and everything in between. However, it's with some nervousness that we're announcing today a focus change for our site.

Since the site's inception, we've been focusing on the world of the X-Men, with slight veering into X-related Avengers and other minor series. However, in our super-secret internal forum, where all of the contributors' have been steadily working on new projects, we've seemed less and less interested in whats going on in the world of the X-Men. Instead, it's been replaced with a new obsession, which we think all of you will agree is sweeping the world:

We love it. We LOVE it. In our internal forum, threads to discuss projects have been replaced with multiple threads about the books, the TV series, even our own personal fan fiction. Even a few of us are cosplayers with authentic costumes and paraphernalia. Finally, after about a year of this, it was suggested that we stop all of this silly writing about the world of X-Men and change its focus to something that REALLY matters: the Starks, Lannisters and all who reside in Westeros and the lands across the Narrow Sea.

Over the next few weeks, you will see new Ice and Fire related articles appearing and old, silly articles on mutants disappearing. We've posted today a hybrid logo to ease the transition, as not to shock too many of our visitors. If there are any articles on our site which you really enjoy, we suggest downloading them, as within 6 months or so they will be gone. In the meantime, Today is the 1st of the month and so we release a special Wallpaper for you to download, and adorn your favorite computer device! enjoy. 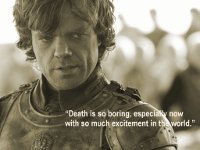 Here’s how the site looked on April 1. 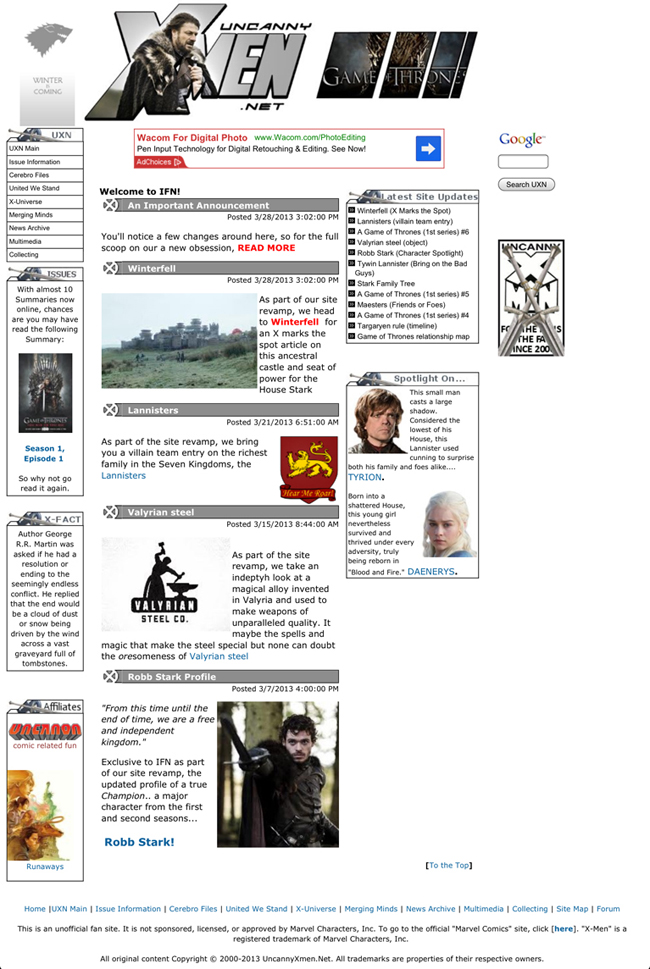 Here are the banners for the "great houses of Westeros," which rotated with each refresh:

We had some nice replies in the Feedback section of our Forum, as well as some nice posts on our Facebook page. Thanks as always to those who come to see what we’ve done and especially to those who are kind enough to give us a “thumbs up.”