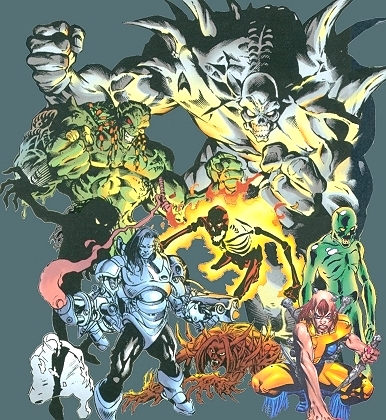 The Morlocks were believed dead after Mikhail Rasputin's flooding of their subway tunnels in Uncanny X-Men #293, but Cable (1st series) #15 revealed that, in the last instant, he transported them to another dimension, dubbed “The Hill.” There, time moved a lot faster. Spending roughly a decade in this dimension, a new generation of Morlocks grew up in harsh surroundings. These new Morlocks were used to nothing else but constant fighting. Some of these Morlock descendants came back to their home dimension as a group called Gene Nation.

Powers: Heightened strength, agility, reflexes, and recuperative powers, plus a bone growth factor that causes her bones to grow beyond the confines of her body, and splinter off into removable spikes that she can use as jagged blades and weapons; previously she had two hearts, but one was cut out

Fact: Originally, Sarah's powers were planned to be sensing goodness in others. She looked normal in her first appearances. Only flashback scenes shown since her debut as Marrow have depicted her with bone growths at an early age.

Dark Beast (AoA version of the Beast, Henry McCoy) - not a member, but mentor / employer of Gene Nation

Fact: The Dark Beast is an expert in genetics.

Powers: Exoskeletal enhancements gives him enormous strength and resistance to physical injury, lethal spikes extending from his backside and forearms, and the ability to expand his size and mass.

Powers: Gelatinous form absorbs physical harm to no effect and can flow onto another person to completely encase them within a transparent and undetectable film, allowing him to manipulate that person’s body while they asphyxiate underneath his resin

Powers: Can absorb the physical and psychic residue left by the recently deceased, allowing him to use their remains as raw material to expand his body and increase his size, strength, endurance and reflexes.

All Gene Nation appearances: none

Fact: Even though he was in Callisto's holographic file about Gene Nation, he never appeared with them. Instead, he later showed up as a member of Havok's Brotherhood. Possibly Ever abandoned his group as soon as they materialized in the Morlock tunnels and hid himself, until the Dark Beast or Havok found him.

Powers: Psychometrically channel his mental energy through solid matter, focusing through the walls and floors a clairvoyant awareness of his surrounding area and disruptive “mind-locks” that can cause pain and paralysis in others.

Powers: Mutant metabolism outfits her with razor pointed bone shards on her wrists and various other places on her body.

Powers: Composed of a psycho-active mucous which can absorb impact and conducts his psychic energy so that he can throw small packets of his mass to stun others or leave pieces of himself behind that enable him to view events in the area even after he moves on.

Powers: Generates a furnace of nuclear energy within his body, allowing him to fly, project intense heat and pyrotechnic bursts, and has reduced him to a flaming skeleton.

Powers: Exists in a state of mathematical probability, rendering him transparent, partially intangible, and capable of projecting his binary thought patterns to scramble the minds of others.

Powers: Composed of pure Darkforce energy, a living shadow that can stretch and extend itself and create the feeling of metaphysical cold and fear in his victims.