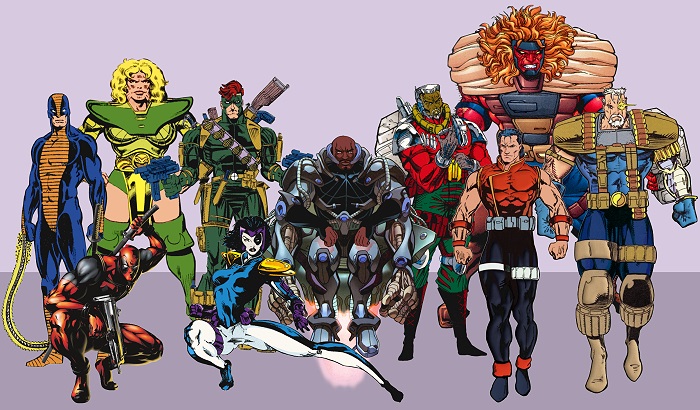 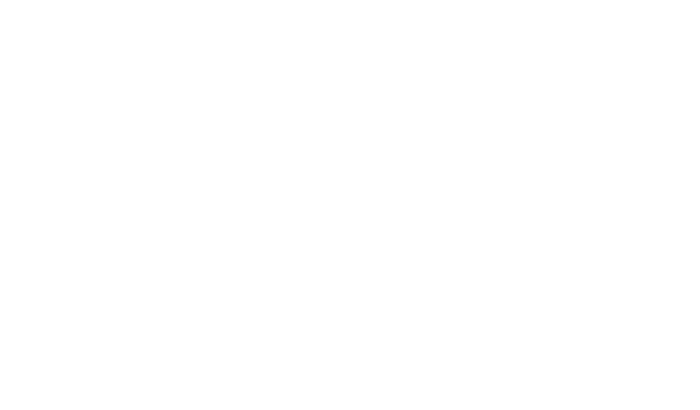 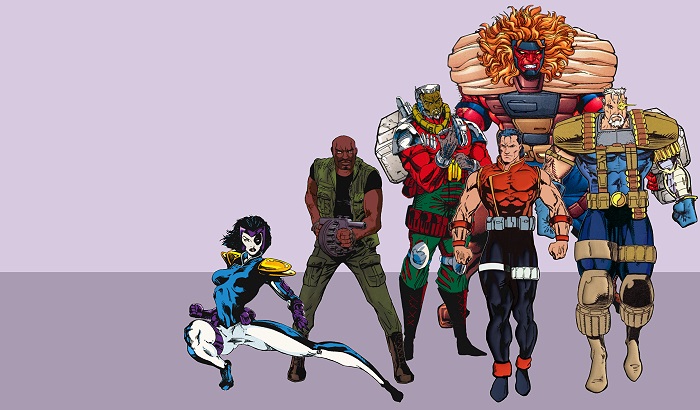 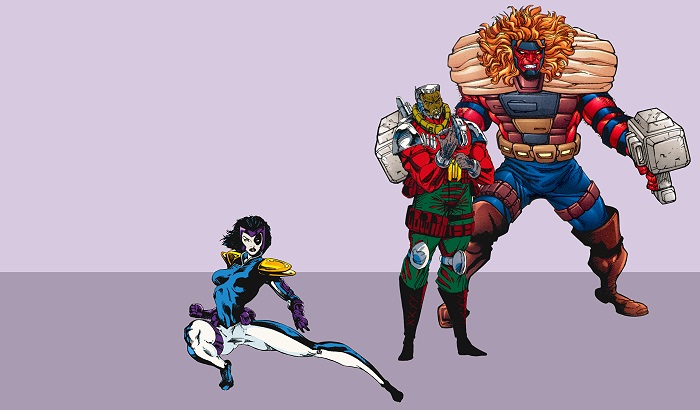 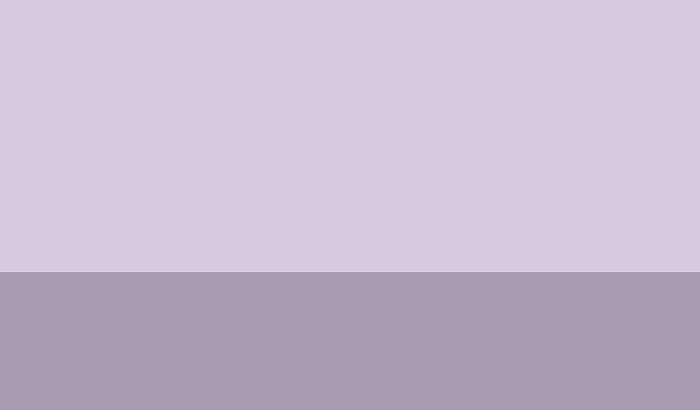 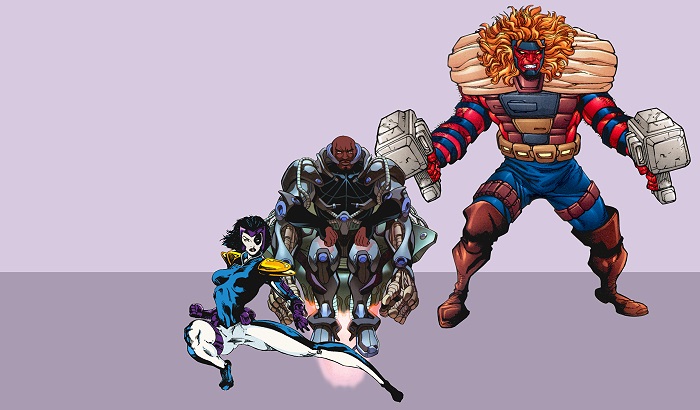 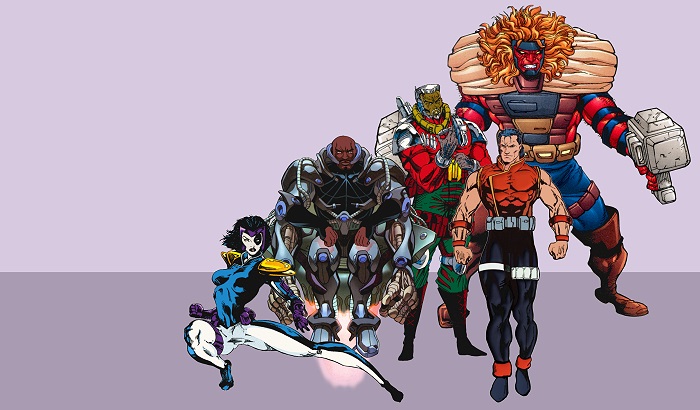 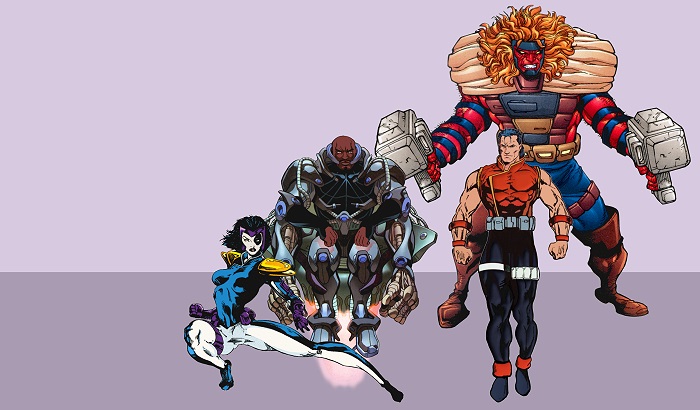 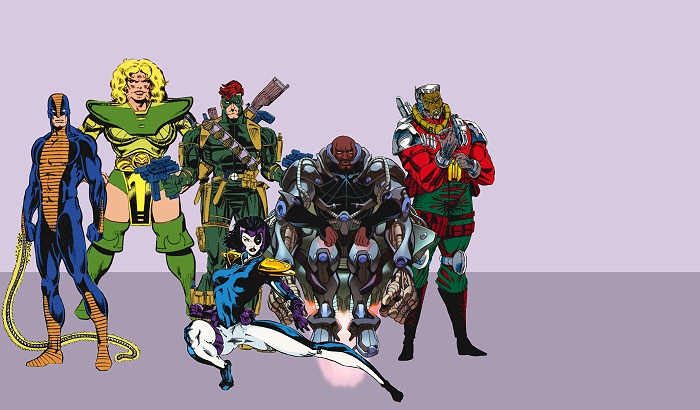 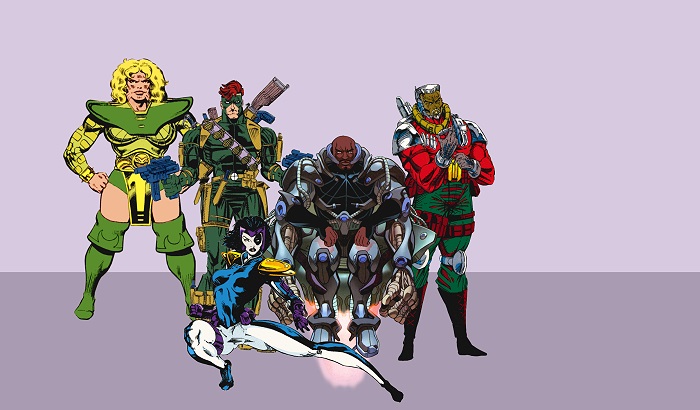 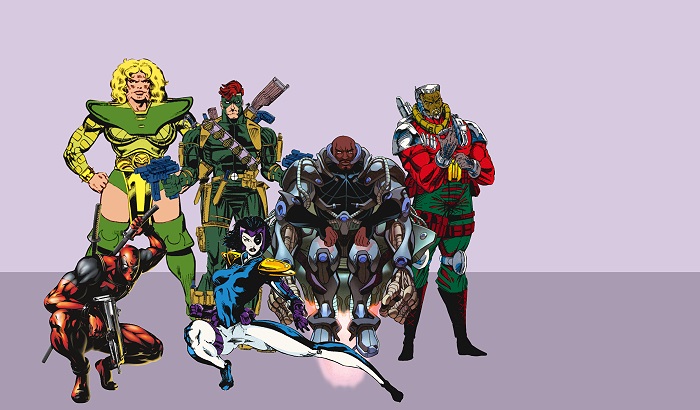 Chronology Bridge got the Wild Pack a job from AIM, retrieving some stolen tech from a Hydra base in New Mexico. The team successfully infiltrated the base but, as they grabbed the device, an automatic video message started playing. Baron Wolfgang von Strucker congratulated them on their efforts, but gloated that the self-destruct sequence would never let them leave alive. Fortunately, Cable accessed the Professor to bodyslide the Wild Pack to safety. When they returned the device to AIM, the Pack learned it was non-functional anyway. AIM only wanted to see if Hydra would steal it, to discover how far Hydra had progressed with their own research. (10 years in the past) [X-Force (1st series) #8]

Cable and G.W. Bridge rescued a U.S. government agent named Kevin Tremain from the Mandarin's clutches. Cable managed to save Tremain's life with a blood transfusion, but unfortunately transferred a small portion of the techno-virus into Tremain as well. Because Kevin was a mutant, Cable left him at Xavier's for care. [Cable (1st series) #33]

The Wild Pack performed a mission in Iran during a civil uprising. They used a hostage rescue scenario as a cover for their true mission – demolition and sabotage against a local corporation. Kane and Hammer talked about how easy the mission was, and hoped their new employer Mr. Tolliver had more work like it. (10 years before the X-Cutioner’s Song) [Cable: Blood and Metal #1]

A few years later, the team was invited to Tolliver’s chalet in Austria. Tolliver did not meet them in person, but had a new job for them to perform. However, Tolliver’s attaché required them to change their name in order to avoid legal charges from Symkaria’s similarly named Wild Pack. When Kane triumphantly scavenged a six pack of beer, they found their new name. The Six Pack travelled to Afghanistan to eliminate Soviet interference on Tolliver’s opium smuggling route.

While securing the route, they uncovered a mysterious high tech bunker hidden under the ground. At Cable’s direction, the Pack explored the bunker, and shockingly discovered Cable’s arch-nemesis Stryfe in command of the installation. When Stryfe mentioned he was maintaining the bunker as part of Tolliver’s operation, Bridge realized they were actively opposing their client, and demanded the Pack bug out immediately. Cable was too caught up in his private feud with Stryfe to listen, however – he did bodyslide the Six Pack to safety, but not before detonating the entire bunker in a vain effort to get at Stryfe.

Bridge was furious with Nate for breaking their contract, since Tolliver would definitely paint a target on their backs for destroying his operation. Cable insisted they were targeted anyway because of Stryfe’s involvement, and asked Bridge and the Pack to trust his judgment. (7 years before the X-Cutioner’s Song) [Cable: Blood and Metal #1-2]

Sure enough, the Six Pack spent the next eight months on the run from Tolliver’s own forces, and any other mercenary looking to claim the bounty on their heads. The others wanted to take the fight to Tolliver, but Cable said that neither their reputation nor Tolliver were important, it was all about Stryfe and they had to trust him on this. Not before long, they tracked down Stryfe to a secret hideout in Uruguay. Cable was eager to kill Stryfe and his team wondered what the enmity was about, as Cable gave no explanations. Worse, they weren’t being paid for the job. Finally, they reached the base’s center, and Cable ordered Hammer to copy all of Stryfe’s files, while the others rig a few explosive devices. No sooner had Hammer took the copied data disk and the timers were set on three minutes, Stryfe suddenly teleported in and grabbed Kane by the throat. He demanded the data in exchange for his life, but Cable refused the deal. Hammer opposed him and decided to hand over the disk, only to be shot in back by Cable. Stryfe was the first one to recover the dropped disk. As Stryfe teleported away, Cable bodyslid to his ship to see if he can follow Stryfe. Left behind, the team tried to get to safety as the bombs detonated. In the resulting chaos, Hammer and Kane were both seriously injured by the falling debris. (6 years before the X-Cutioner’s Song) [Cable: Blood and Metal #2]

Chronology continued Domino located Grizzly back in the Australian Outback, where he fled after Weapon PRIME disbanded. They visited Hammer, and together this “Three Pack” began searching for intelligence on Cable and X-Force. Domino and Grizzly infiltrated Department K using Hammer’s image inducers to check their files, but ran into a revamped Weapon PRIME. They escaped with the help of Hammer’s flight-modified Winnebago. [X-Force (1st series) #20-23]

By chance, Hammer picked up some radio traffic from Boston, Massachusetts detailing a fight between Vanessa and Tolliver’s former enforcer, Deadpool and Sluggo. Tracing her mutagenic signature, Domino was ready to kill Vanessa for impersonating her, so Hammer and Grizzly offered her a deal: help the Pack find Cable and X-Force, and Domino doesn’t get to kill her. Not having many options left, Vanessa agreed. [X-Force (1st series) #23-24]

After tracing X-Force from the Adirondacks to Arizona, the Three Pack and Vanessa arrived at Camp Verde at around the same time as Cable, Kane, and G.W. Bridge. Garrison had spent time in Cable’s future after the two made a deal to join forces in exchange for future-tech to cure Hammer. Bridge had been investigating Cable’s disappearance after the Weapon PRIME fiasco at his Swiss chalet when Nate and Garrison warped back to the present. Seeing Cable for the first time in eight years, Hammer tried to get his revenge using magnetic clamps, hoping to leave Cable’s bionics inoperative and the man frozen from the neck down, just like Hammer. Kane intervened and told Hammer about the synth-org cybernetics they brought back from the future to cure him, but Hammer rejected Kane’s offer, refusing to become more machine than man like Nate was.

Vanessa escaped in the chaos, and Domino insisted they go after her. The reunited Six Pack wondered if they could really stay reunited after all that happened between them. Cable said he needed to reconnect with X-Force, and was hesitant to agree to total transparency with his partners. Reluctantly, the Pack agreed that, if Cable couldn’t promise to be straight with them, he no longer had a place on the team. The five remaining members left Camp Verde in Hammer’s flying Winnebago. [Cable (1st series) #4]

The remaining members of Six Pack (Grizzly, Domino, Kane and Hammer) were hired by SHIELD to retrieve an experimental prototype from Commtech Research near Cape Canaveral. On the job, they ran into Nomad, who had already stolen the prototype and escaped before the Six Pack could get their hands on him. Although they later tracked him down, Nomad had already turned the prototype over to his employer Ms. Roya, the woman who invented it. The problem was the prototype could be used to scramble communication frequencies, and Roya wanted to sell it to drug lords so they could continue smuggling between Cuba and Florida without interference. Meanwhile, SHIELD wanted the device as an asset against Communist Cuba. Nomad and the Six Pack hunted Ms. Roya down, and Nomad decided that neither party should have the device and destroyed it. [Nomad (2nd series) #20]

Chronology continued When Cable’s psychic powers were maximized after a series of events, he became a major player on the world stage. He used the remains of the Greymalkin space station to create a private floating island, and began intervening in world affairs around the globe. His proactive efforts transcended national boundaries… which naturally made the nations of the world rather nervous. G.W. Bridge and SHIELD monitored Nathan’s activities closely, looking for an excuse to intervene. Seeing an opportunity, Bridge, re-assembled the Six Pack to confront Nate on his island, now re-named Providence. Alongside Hammer and Domino, Bridge recruited three mercenaries, Constrictor, Solo and Anaconda. [Cable / Deadpool #7]

The Six Pack attempted to infiltrate Providence, but proved woefully unmatched for Cable at his current power levels. Nevertheless, Nathan only fought defensively, and invited the Pack to look around the society he was building and draw their own conclusions about his methods. Bridge and Hammer were unconvinced, and Cable placed them in psionic stasis until his endgame was completed. Domino, meanwhile, was willing to give Nate the benefit of the doubt, and the other three signed on for a bigger paycheck. The situation got out of control when Cable promised worldwide nuclear disarmament. Seeing this as a threat to national security, the forces of SHIELD, the X-Men and even the Silver Surfer (at special request from Reed Richards) assaulted Providence in order to stop Cable. [Cable / Deadpool #8-9]

The battle between Cable and the Herald of Galactus left Providence unstable. The Six Pack and X-Men joined forces to repair the floating island’s gravity generators, only to discover the systems were only props – the entire island was actually being supported at all times by Cable’s telekinesis. Nathan manipulated the whole situation, including his own defeat, to portray his efforts to the world as a messianic sacrifice in the interest of world peace. He telepathically broadcast his final moments to the whole world as he used the last of his strength to save Providence and everyone on it before vanishing from the spotlight. [Cable / Deadpool #10]

Looking to confirm whether Cable was alive or dead, G.W. Bridge reassembled the Six Pack to search the globe for any signs of the now so-called “Savior.” They found Nate at his old Swiss chalet safehouse, barely alive after his struggle with the Silver Surfer and the psychic lobotomy that kept his powers from running unchecked. In his weakened state, Cable accidentally pulled the psyches of the Pack into his mindscape, leaving them in danger of dying along with him. Fortunately, Deadpool masterminded a plan (Deadpool..?) to safely restore Nate’s body and mind. With the help of the Fixer, Cable’s T-O mesh was stabilized along with his powers, freeing the Six Pack. Bridge and Cable talked, and he agreed to pull back from the world stage a bit, and with that they both agreed to stay out of each other’s way for the foreseeable future. [Cable / Deadpool #11-12]