Weapon P.R.I.M.E.(PRototype Induced Mutation Echelon) is a Canadian-based team of superhuman operatives. Like Weapon X (Garrison Kane) they work for Department K. When they first appeared, they were assembled by Kane to take down Cable. Most members had a grudge against Cable for various reasons, though in most cases it was a case of mistaken identity and the offenses against them were actually Stryfe's doing. 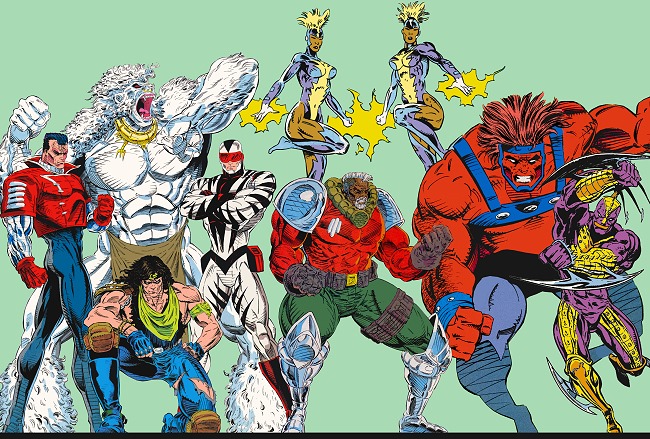 Powers: Generates waves of vibration out from his body to cause any nearby objects to shake, crumble, shatter or disintegrate, destabilize the ground beneath him to cause earth tremors, and focus his emissions into vibe-quakes, tightened seismic shockwaves with tremendous concussive force.

Powers: Possessed by the curse of the Wendigo, striking those who commit cannibalism in the Canadian woods, granting him superhuman strength, speed, agility, endurance, hyper-keen senses, a phenomenal resistance to injury and regenerative abilities, and razor sharp claws. He has a neuro-implant that enables him to think and speak like a regular human.

Powers: none, human. Wears an electric-magnetic battlesuit (based on the Hudson model) that increases his strength, speed, and reflexes, has infrared sights and energy signature detectors, focuses E.M. energies into concussive bolts and shaped energy fields, and is equipped with rocket thrusters that enable him to fly.

Powers: Twins that share a psychic link and a bio-electrical symbiosis that forges an energy bond between their hands, allowing them to fly and release destructive plasma discharges.

Powers: Heightened strength, speed, agility, and reflexes, wears a flexible armor made out of multiple layers of titanium plating and equipped with scythe blades on each forearm.

Powers: Human quadriplegic outfitted with cybernetic limbs that increase his strength, speed, and reflexes, can detach at the wrist either as projectiles or wire-guided taser units, and carry retractable plasma blasters, laser weaponry, and a circular shield.

Powers: none, human, former mercenary, for a time SHIELD commander