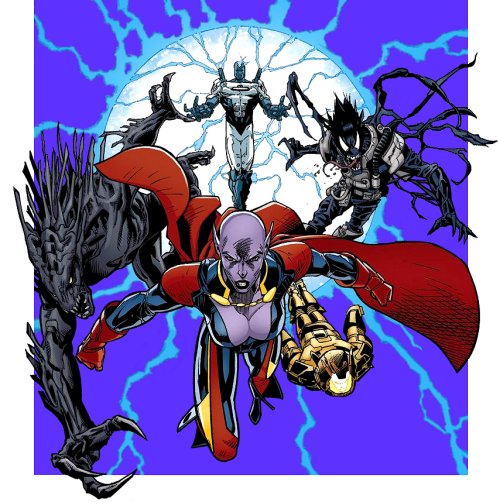 Vulcan, the new Shi’ar Emperor, was struggling with constant attacks by rebels, lead by Lilandra Neramani and her Starjammers.  Xenith, Zzxz, Pn’zo, “Godkiller” and the Hodinn were all visited in the Kr’kn prison by Vulcan and offered a place in his new elite Praetorian Guard to hunt down the Starjammers. They all accepted, though Godkiller killed several guards during the process.  [X-Men: Kingbreaker #2]

The symbiote Zzxz was supplied with a Shi’ar host and the group were released to hunt down the Starjammers. They promptly tracked the group to the neutral Clench worlds and attacked. The group fared well against the Starjammers, until the Hodinn went mad and unleashed his power, destroying the planet. The Starjammers and the Praetorians both managed to escape, however. [X-Men: Kingbreaker #2]

The Hodinn was collected from space by a Shi’ar vessel, on Vulcan’s orders. Meanwhile the Praetorians tracked the Starjammers to the Kr’kn prison, where they were trying to break out several of their members. The groups fought again and the Praetorians were joined by the Imperial Guard. Raza killed Zzxz’s host but the symbiote took over the Starjammer as his new host. Meanwhile, the Shi’ar delivered the Hodinn to orbit above Kr’kn. [X-Men: Kingbreaker #3]

The Hodinn battled Rachel Summers in space before falling to the surface into the prison. Havok absorbed the Hodinn’s star energy, rendering him powerless, and the Imperial Guard promptly killed the mad Hodinn for his crimes. Meanwhile Gladiator of the Imperial Guard was shocked to see Xenith out of prison and attacked his cousin on instinct, until Empress Deathbird stopped him. These distractions allowed the Starjammers to escape, except the possessed Raza, who was still under Zzxz’s control.  Vulcan declared the Praetorians would be his new frontline in the Shi’ar Empire’s great expansion. [X-Men: Kingbreaker #4]

When the Nova Corps tried to stop the illegal invasion of Nil-Rast by the Shi’ar, hundreds of Nova were captured by Gladiator and his Imperial Guard.  Vulcan sent the Praetorians to take over the mission and Gladiator handed his prisoners over to Xenith and departed. As soon as the Guard left, the Praetorians executed all their prisonsers. [Nova (4th series) #24]

The Praetorians next went to Kree-Lar, capital of the Ceded Territories ruled by regents of the Negative Zone, where Xenith attempted to assassinate Lord Ravenous. She was interrupted by Nova corpsman Robbie Rider, who wanted to arrest her for murdering the Nova prisoners. He could do little against a Strontian, though, even with the power of the Nova Force. Rider pinned Xenith down with gravimetrics, hoping that backup would soon arrive. [Nova (4th series) #26]

Nova backup arrived but was blocked by Blastaar and his Negative Zone forces, who were allied with the Praetorians. While Blastaar agreed to allow the Novas time to search for their comrade, he also allowed the other Praetorians (Pn'zo, Godkiller and Zzxz) time to intercept them. The Novas and the Praetorians fought and the Novas systematically took them down. The Uncreated Godkiller was skewered on his own quills, Pn’zo shocked by his own tendrils and Zzzxx separated from its host Raza. Nova Prime, Richard Rider, arrived in time to save his brother and took down Xenith using the psionic dampeners in his helmet to interrupt her psionically-reinforced powers.

All Praetorians were arrested for war crimes and placed in stasis within the Nova Corp’s base, which was within Ego the Living Planet at the time. [Nova (4th series) #27-28]

Notes: Xenith was the leader of the group.

Notes: It is unknown whether Pn’zo is his name or the name of his species

Notes: Zzxz appears to be the same species of symbiote as the one bonded with Earth supervillain/hero Venom.

Powers: Symbiotic ooze-like entity capable of bonding with a physical host, controlling their body and enhancing their strength and abilities. Capable of creating tendrils by extending its own mass and crawling on walls.

Notes: No specific name for the character is provided, though he is nicknamed “Godkiller” by Xenith.

Powers: Possesses thick armored skin, razor sharp talons and prominent spikes on his back and arms, which can be expelled from his body as projectiles. Exhibit above human strength, as well a low level telepathy.

Notes: This Hodinn is the same species as G-Type of the Imperial Guard. It was mentioned that all his species were wiped out due to how dangerous they were.

Powers: Exists as a being of living solar plasma with white-hot skin and a specialized armor that can direct his energies as fiery blasts or focused thermal beams. Capable of planetary destruction.