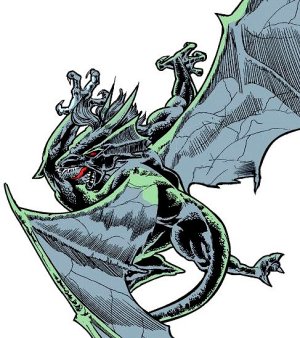 The P!ndyr were amongst the most renowned and feared warriors in the entire Shi'ar Imperium. With thick, scaled skin, similar to a reptile's, long snouts and large wings, the aliens are draconic in appearance. Their skin varies in colour from green, red and purple and some have been be observed with a shock of hair on their heads. They are bipedal, walking upright just like humans, and also have the ability to fly, thanks to their large, dragon-like wings.

Their home planet can best be described as a hard-scrabble rock of a planet, all harsh, vertical mountains thrusting one way, abyssal canyons plunging the other. There is nothing soft or gentle about the world and their physiology has adapted to match this. 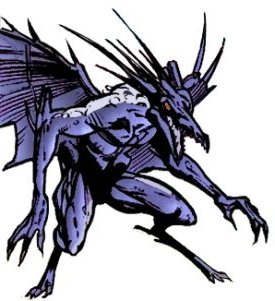 Little is known about the P!yndyr beyond the fact they were part of the Shi’ar Imperium. Unfortunately, little will likely ever be learned about the species, as the entire population of their homeworld was slaughtered by a warskrull, mimicking the appearance and vast telepathic abilities of Charles Xavier, all as part of a plot to take over the Shi’ar Empire.

When the Shi'ar came to the P!yndyr, under the influence of the Xavier/Warskrull, they demanded t 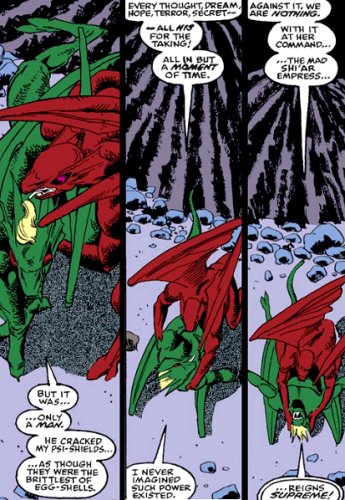 However, few surviving members of the species were observed alive and fighting under the control of the fake Xavier. As such, it is possible there are other survivors out in the universe. [Uncanny X-Men (1st series) #265, 276-277]