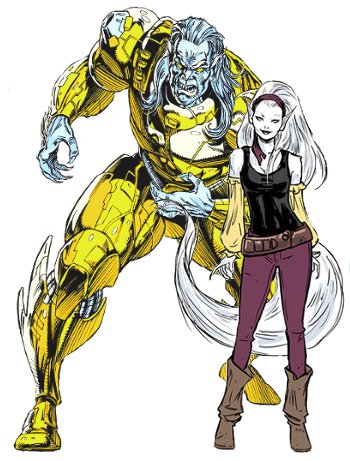 The Mephistoids (sometimes known as the Mephitisoids) are a species of humanoid felines with potent pheromone based abilities. Each male of the species has the ability to control others’ minds with their pheromones, while the females are only able to use their powers during mating.

Each member of the species possesses above average speed, reflexes and agility, as well as razor sharp claws. Fur and hair color seems to be exclusively white, with some black.

Mephistoids use very strange speech pattern that most other races can’t understand or imitate. Names, for example "Hepzibah," are only close to their real pronunciation. Also, they seem to have a completely different sentence structure to most races. (Example: "Shi’ar not friends anymore... if ever were! Turned, Lilandra has! Forget you how we met?") 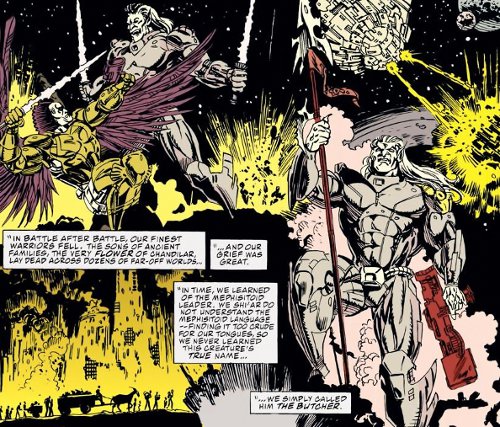 About 1200 years ago, when the Shi’ar Empire was still young, they encountered a rival race called Mephistoids. At first, it seemed that both empires were equally matched, but slowly the Mephistoids were winning the war, as the males of their race are able to emit certain mind-controlling pheromones.

When almost the whole Shi’ar fleet was destroyed, a few Shi’ar had crash landed on a small world that had earlier been colonized by the Mephistoids. The group's highest ranking officer, by default of everyone else being dead, was named T’Kyll Alabar, and he led his people to the nearest building. Prepared to fight their last battle, the Shi’ar soldiers were surprised to be greeted by female Mephistoids belonging to a peace-loving abbey. They welcomed the Shi’ar and nursed them back to health. During this time, T’Kyll learned that the females too emitted the pheromone, but only while breeding. 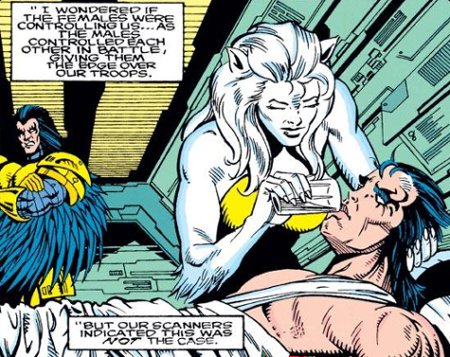 A cruel plan formed in Alabar’s head. At night, he killed all the Mephistoid women in the abbey and extracted their genetic material to distill the pheromone, which he used to inspire his scattered people to follow him with fierce fanaticism. The Shi’ar fanatically followed Alabar and fought ruthlessly like never before, till the Mephistoids were defeated. Their colonies were occupied by the Shi’ar and the Mephistoids, especially the males, were strictly quarantined to their native planet, as the Shi’ar feared their pheromones.

The Shi’ar were left with a quandary, though: what to do with the Mephistoid’s leader? Known only as “the Butcher,” the male Mephistoid had been a ferocious leader. The Shi’ar were aware that if they executed the man he would become a martyr to his people, and leaving him quarantined on his world was too dangerous. Instead, it was decided he would be placed in suspended animation and locked away in a ship for the rest of time. T’Kyll Alabar was placed in animation alongside the Butcher, in case the prisoner ever escaped his sentence.

Like after any war, history books are written by the victorious party. Shi’ar legends and history praised T’Kyll Alabar as their greatest hero, for inspiring his fellow soldiers in the time of their greatest despair, while ignoring the slaughtering of innocents. The Mephistoids, on the other hand, were perceived as barbaric, cruel people, though in fact they were not any worse than the Shi’ar. 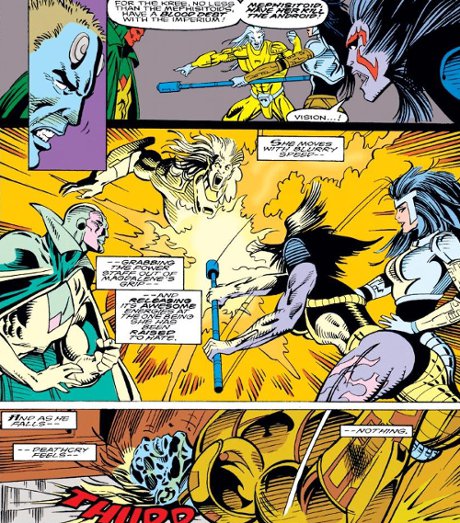 1200 years after the Mephistoids were defeated and the Butcher was locked away, his ship was high jacked by the Kree and sent to Earth. Their plan was for the Butcher to amass an army of mind-controlled Earth superhumans with which to attack the Shi’ar. The Butcher enthralled a small force on a Scottish island, including some Avengers, before killing T’Kyll Alabar, who had awakened from his animation to stop him. In her rage, the Shi’ar Avenger Deathcry killed the Butcher.

Mam’selle Hepzibah, the most prominent member of the Mephistoids, had been found guilty of terrorism and was taken to prison on Chandilar. She escaped with the Starjammers but has no knowledge of where her native planet is, as the location of the Mephistoids' homeworld is Shi’ar classified information. [Avengers (1st series) #378-379]

Current Status: With the Starjammers

Arrested and locked away for life by the Shi’ar, she met and escaped with those who would become his fellow Starjammers. With her new allies, Hepzibah embarked on a life of piracy against the Shi’ar. She also formed a long relationship with their leader, Corsair. When Corsair died, she briefly joined the X-Men on Earth, before returning to the Starjammers when Corsair was resurrected.

After the destruction of the Nova Corps during the Annihilation War, the Xandarian Worldmind sought to re-establish the Corps and Morrow was one of the first recruits. After the events of the War of Kings, where numerous corpsman were killed, Nova Prime Richard Rider scaled back the corpsmen to a few members and demoted Morrow to Danerian rank. Shortly after, Richard Rider was trapped in the Cancerverse and the remaining Nova were cut off from the Nova Force. Morrow’s whereabouts are unknown.