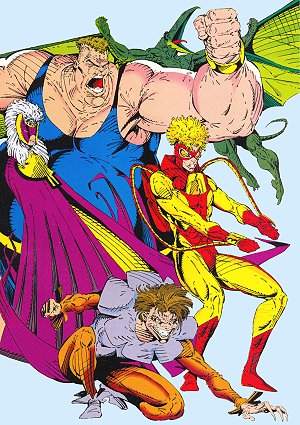 Powers: Great leg strength gives him enhanced agility and the ability to leap incredible distances. He also secretes an adhesive slimes through the pores on his hands which acts as a powerful glue and can slow the metabolism of others upon contact.

Equipment: The Toad has stolen technology from The Stranger (inclucing a spacecraft, synthezoid versions of the original Brotherhood, an armored battlesuit and a device capable of turning Karl Lykos back into Sauron.)

Powers: Enhanced mass and multiple layers of elastic, fatty tissue grant him superhuman strength, can absorb all forms of impact and damage, and are flexible enough to hold objects within the folds of his flesh and pop them out when he flexes his muscles. He can also generate gravity fields that hold him firmly in place to make him an immovable object.

Powers: Non-mutant variant able to drain portions of another person’s life energy to increase his physical vitality. With a large source of life-force such as mutant energy he undergoes a metamorphic transformation into a pterodactyl humanoid, with increased strength, speed, aerial agility and endurance, highly-durable dinosaur scales, leather wings beneath his arms that allow him to fly, a razor sharp beak and finger talons, and a hypnotic gaze that enables him to plant mental suggestions or hallucinations in the minds of others.

Lykos is a split-personality: Karl tries to do good and isolate himself from society (for the most part), but Sauron wants to rule and tends to enjoy eliminating mammalian life-forms.

Powers: Sense electromagnetic harmonics and convert herself partially into an energy state, enabling her to detect electronic and energy-wave signatures, levitate herself, produce a disruption effect that scrambles human senses and electronic devices, and generate bio-electrical charges that fry neural synapses, paralyze others, and disable special abilities.

Powers: Assume psionic command of any source of flame, enabling him to douse or feed the fire, shape it to assume any form he wishes, give enough substance to the flames so that they can touch and move solid objects, and immunize himself to the intense heat generated by his flames.

Equipment: Uses a flame-thrower to produce his flames.

Facts: Pyro was a writer, before being recruited by Mystique for the third Brotherhood.

Powers: psionically sculpt flesh with a touch, rearranging the features of living beings to alter their hair, skin or eye color, add on additions such as tentacles and extra eyes or mouths, seal off body orifices and transform others into grotesque creatures. Since his unexplained resurrection, he can apparently use his power to alter his own features.

Powers: Creates portals in space that he can use to travel between dimensional barriers or move in the same dimension over short distances.

Powers: Siphons bio-energy signatures from mutants to temporarily suppress their special abilities, a talent he used on Legacy infectees to prevent unwanted flare-ups of their power. The energy he absorbs charges him with power, which he can use as explosive discharges or cause the energy signature itself to feedback upon its owner to overload their mutagenic auras, causing them tremendous pain.