The Nasty Boys were Mister Sinister’s second group of mutant thugs and mercenaries. Why he chose to temporarily replace the Marauders with this new group was never explained. Strangely enough, the Nasty Boys featured more prominently in X-Men: The Animated Series than they ever did in the comics. 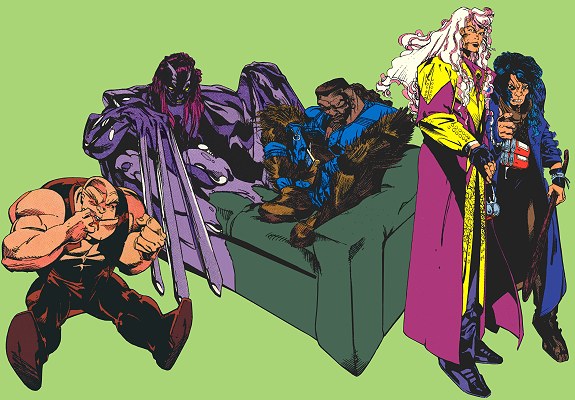 Powers: Superhuman strength, endurance, and resistance to physical harm. He draws on a limited source of extra-dimensional bio-mass to expand his body and muscle, increasing his size and strength to a certain degree.

Fact: Slab's sister is Thumbelina of the Mutant Liberation Front.

Powers: Physical structure is composed of tar-like ooze that he can stretch and expand at will, adhere to solid material, reduce to a formless puddle, and use to encase or constrict around solid objects.

Fact: Gorgeous George once drank so much he forgot how long his arms were supposed to be. George’s real name was only listed in the Marvel Handbooks, and did not appear in in-continuity text.

Powers: Psionically records all sound waves in his environment, and can then amplify them a thousand-fold to transmit through his vocal chords as high-decibel echoes.

Fact: Ruckus’s real name was only listed in the Marvel Handbooks, and did not appear in in-continuity text.

Powers: Manipulates wooden fibers, allowing him to summon forth roots from beneath the ground and direct them how he wishes or alter his shillelagh to increase its length or extend sharpened spikes.

Equipment: Ramrod carries a shillelagh so he always has something he can use his powers on.

Facts: Ramrod was an illegal immigrant, and was deported for his crimes. He has since returned, again probably illegally. Ramrod’s real name was only listed in the Marvel Handbooks, and did not appear in in-continuity text.

Powers: Generates a psionic probability matrix that guides events in his favor and against his opponent. This ability is rather nebulous, but it has been used in the past to cause people to make rash, uninformed decisions and create situations where a mutant's power will work against itself.

Powers: Utilize the kinetic energy released upon impact as a catalyst agent to initiate a complete and total replication of his body’s cells, splitting off exact duplicates of himself with whom he shares an empathic link and can absorb back into himself later.

Facts:
- This rogue duplicate somehow developed a sense of self separate from the real Madrox, and joined the Fallen Angels, while the original Madrox stayed behind at Muir Island. When exactly this dupe split off from Madrox Prime is unclear, but it seems that the Madrox who went to New York with Siryn and Moira in Fallen Angels #2 was this renegade duplicate, and he was the Jamie seen throughout the rest of the series. This follows with the later conversation between the real Madrox and Siryn in X-Force (1st series) #17, when he claimed the man she had a relationship with in the Angels wasn’t really him.