During a time in which Alpha Flight refused to work again for the Canadian government, they shortly found themselves stranded in an alternate reality after an encounter with the powerful sorcerer Llan. Still wanting its own super team, the Canadian government assembled a new team from former associates of Alpha Flight, as well as some new super beings. With Department H still shutdown, this new super team were to report directly to parliament, but would they be able to withstand the terror of Llan? Stand aside, Alpha Flight… GAMMA FLIGHT is here! 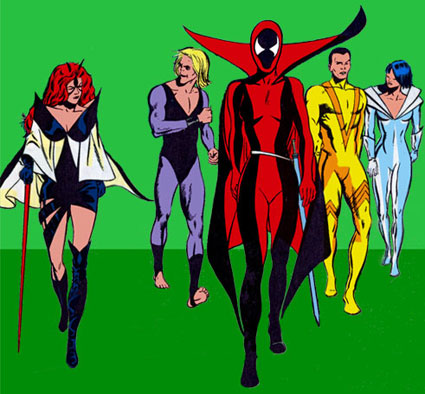 Sanctioned by the Canadian government as Canada’s new official super hero team, Gamma Flight became active while Alpha Flight were in another dimension, thanks to the machinations of the evil sorcerer, Llan. Llan was seeking to wrest control of Canada, so the fledgling super team was kept busy dealing with his schemes. One such danger saw Gamma Flight’s arrival at a seemingly peaceful neighborhood in Montreal, where a young girl had become possessed by a demonic agent of Llan, and slaughtered her neighbors. Llan’s evil transformed the dead into zombies and Gamma Flight was forced to battle them. Fortunately, Nemesis was a confident leader and led her new team as well as possible, given the circumstances. To complicate matters, Alpha Flight had just recently returned from an alternate dimension and arrived at the scene, despite being told by a military officer that Canada didn’t need them anymore. However, as Gamma Flight started to become overwhelmed by the Sorcerer’s forces, Alpha Flight assisted them in battling the zombies, while Alpha Flight’s Talisman purged the demon from the little girl. With the evil gone, at least temporarily, Nemesis informed Alpha Flight’s leader, Vindicator, that Gamma Flight had been ordered to arrest Alpha Flight if they operated in Canada. Before there could be any further arguments, though, both teams took a moment’s silence to mourn the death of the little girl. Gamma Flight later told Diamond Lil that she was not needed for their team. [Alpha Flight (1st series) #76]

It was at their Gamma Flight HQ in Winnipeg that Nemesis received a report that Vindicator and Diamond Lil were battling para-humans. Gamma Flight discussed their orders to apprehend Alpha Flight, and Nemesis decided that it was time to show Canada’s former heroes who was in charge now. Shortly thereafter, they arrived downtown at the scene of the battle, where Vindicator and Diamond Lil had caused much destruction battling several villains that had fled from the States to Canada during the “Acts of Vengeance.” Suspecting that they were also under the influence of the Llan the Sorcerer, Vindicator explained this to Nemesis and Witchfire, who confirmed Vindicator’s theory. Witchfire used her magical power to weave a spell, breaking the Sorcerer’s hold over the American villains. Nemesis informed Alpha Flight (by this time Box and Sasquatch had also arrived), that they were under arrest, given that they had no legal clearance to fight the battle and cause so much destruction. [Alpha Flight (1st series) #79-80]

When Nemesis later received a phone call informing her that Alpha Flight had escaped custody, and that Gamma Flight’s new orders were to take the team in dead or alive, she came to believe that the government wanted Alpha Flight dead. By now, the trouble with the Sorcerer had increased, so Alpha Flight had called in assistance from several former members and associates. As a result, when Gamma Flight arrived at Maison Alpha, they were confronted by several more opponents than they expected. After Nemesis ordered Alpha Flight to surrender themselves, Vindicator wanted to explain the situation to Nemesis, but a possible peaceful resolution was thwarted by an attack from Diamond Lil, who had a grudge to bare against Nemesis. This resulted in a full-fledged battle between the two teams, with Witchfire attacking Diamond Lil, Silver facing off against Sasquatch, Auric against Northstar and Aurora, and Wild Child seeking revenge on Shaman. The two leaders, Nemesis and Vindicator, argued with each other as they fought. Nemesis proving skilled in combat, but eventually Alpha Flight’s experience overwhelmed Gamma Flight, and the fledgling super team was defeated. Gamma Flight were convinced that both teams had been used by the Sorcerer. This was further supported by Talisman, who had sent a vision to both teams of Llan’s demon horde which had entered through the Gateway of Night. [Alpha Flight (1st series) #84]

Silver and Auric were the first members of Gamma Flight to tell Alpha Flight that they accepted their innocence, that they were just pawns of the Sorcerer, and suggested that they work with Alpha Flight against their common foe. Witchfire and Wild Child also agreed, so along with several more of Alpha Flight’s associates, Nemesis led Gamma Flight alongside Alpha Flight in battle against Llan the Sorcerer’s demonic forces. Witchfire and Wild Child both fell early in the battle, but Witchfire was revived by Shaman, who needed her mystic powers to help Talisman. Silver and Auric proved useful in the battle as Llan’s demons could not withstand their cold and heat powers, and Wild Child also eventually recovered and fought ferociously through the demons. Eventually, the Gateway of Day was opened, and other warriors joined in the battle, and Llan the Sorcerer was defeated through the combined efforts of Alpha and Gamma Flights. [Alpha Flight (1st series) #85-86]

With Wild Child restrained, Vindicator pointed out that if it weren’t for the Sorcerer influencing the government, he would never have been released from prison in the first place. However, Nemesis started acting very protective of Wild Child and, after he was taken into a correctional facility, broke him out. Vindicator and Wolverine tracked Gamma Flight down, with Nemesis determined to protect her team, and a battle ensued, ending when Wild Child was skewered by Wolverine. Nemesis was determined that they would not be “taken in” by Alpha Flight, to which Vindicator pointed out that the rest of her team didn’t seem interested in a suicide pact. Silver and Auric decided that they could serve the causes of freedom and democracy better in their own country than in jail, and left to return to China, while Witchfire accepted the government’s opportunity to work under Alpha Flight. Nemesis remained as stoic as ever, not willing to give up herself or Wild Child, who was now under her protection. She called Vindicator and Wolverine hypocrites, and with a touch of her sword the two vanished – either teleported away, or reduced to ashes – just like the dream of Gamma Flight. [Alpha Flight (1st series) #88-90]

Powers: symbiotically linked to an indestructible blade that can slice through anything and transfer soul energy, with the powers of flight, teleportation, and sensitivity to the presence of good and evil