Back in 1993, Fabian Nicieza could not have known the can of worms he was opening when he had Mister Sinister reveal in a throwaway line that Cyclops had “brothers,” not just Alex. This article will investigate the clues involved in this storyline, the possible suspects and the final (multiple) revelations. 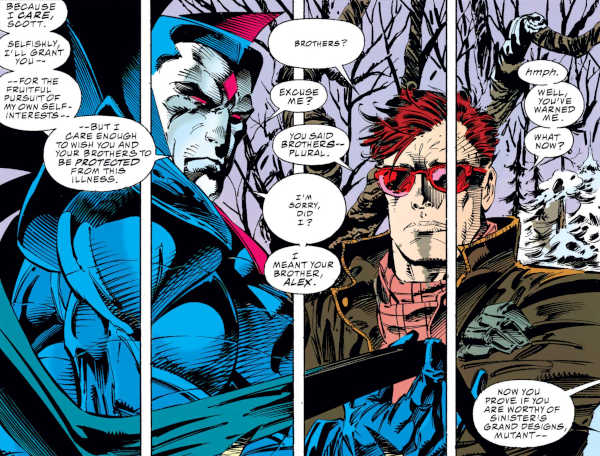 For a start, the popular title of this storyline “Third Summers Brother” is actually wrong… in two ways! The term was created by fans and doesn’t actually reflect what Sinister said to Cyclops in X-Men (2nd series) #23 : “...but I care enough to wish you and your brothers to be protected....”

In truth, the identity of the Third Summers Brother was strongly hinted at by Nicieza almost from the start. Two months after Sinister and Scott’s talk, Nicieza introduced Adam-X the X-Treme in his sister title, X-Force Annual #2. X-Treme had the ability to ignite the electrolytes in oxygenated blood, sending waves of electrical fire through anyone who was bleeding. His alien physiology hinted as Shi’ar origins, but he was suffering from partial amnesia when he first met with X-Force.

When he returned in X-Force (1st series) #29-30, Adam-X was targeted by Arcade on behalf of a client named Milbury, one of Mister Sinister’s reoccurring aliases. Adam’s hunt for Milbury led him 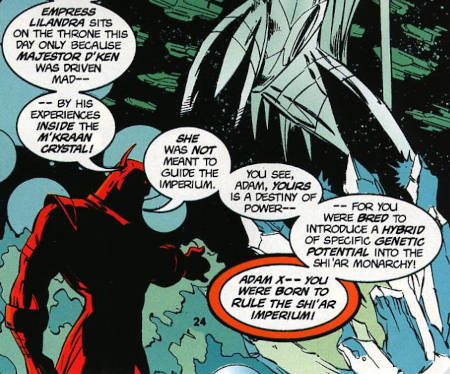 to Alaska in X-Men (2nd series) #38-39, where he encountered Philip Summers, father of Corsair. The kinship felt between Adam and Philip pointed a rather blatant spotlight on Adam as a strong contender for the role of Third Summers Brother. After being captured by Shi’ar agent Eric the Red in X-Men (2nd series) #41, Adam received the strongest of hints in Captain Marvel (3rd series) #2-3 in 1996. Here, Eric and the Crystal Claws openly identified Adam as the child of D’Ken Neramani, former majestor of the Shi’ar, and an Earth woman. All these comics were written by Nicieza.

In Uncanny X-Men (1st series) #156, it was established that Christopher and Katherine Anne Summers were captured by the Shi’ar, not dead like Scott and Alex believed throughout their adolescence. Chris went to the slave pens while Kate was forced to serve as one of D’Ken’s personal servants. Chris escaped the pens to find his wife, only to discover D’Ken forcing himself upon her. The emperor then killed Kate before Chris’s eyes, leading him on the path to become the cynical space pirate Corsair of the Starjammers. 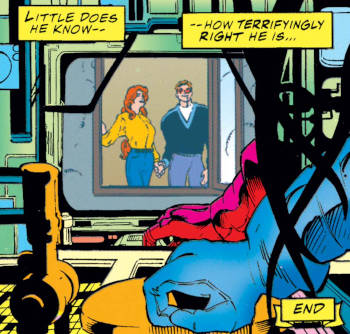 And so, the evidence seemed to support Adam-X being the illegitimate son of D’Ken and Kate Summers, conceived through rape while Kate was the majestor’s slave. Adam had traditional Shi’ar features, mixed with long blond hair, a color shared by Alex and Kate Summers. His identity was known to Eric the Red, and Mister Sinister was shown spying on Eric in X-Men (2nd series) #39. Sinister’s knowledge of and interest in X-Treme tied to his interest in the Summers clan and awareness that Scott had multiple brothers. The conclusion of the plot was all-but confirmed but it was, in the end, NOT confirmed before Nicieza moved on from X-Men, X-Force and Captain Marvel.

Once Nicieza left the main X-Titles in 1995, the door opened for his plotline to be resolved in a way he did not intend. One possibility, who was considered by fans for a time, was Remy LeBeau, Gambit. An orphan adopted into the Thieves Guild, Gambit’s birth parents are still unknown to this day. Remy had brown hair like Scott and Christopher Summers, as well as his natural red eyes, which at least thematically seemed comparable to Cyclops. There is also Gambit’s deep historical ties to Mister Sinister, whose interest in the Summers bloodline is well documented. This plotline therefore hinted that Sinister’s interest in Gambit and in Scott’s “brothers” was one in the same. 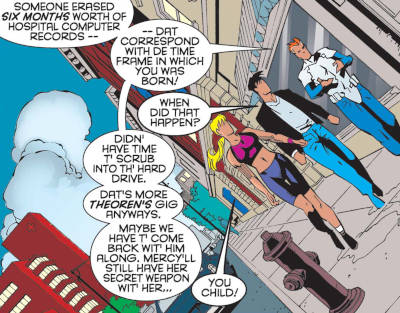 A few years after he moved on from the core X-Titles, Fabian Nicieza returned to write the Gambit ongoing series in 1998. During this series, Nicieza pointedly hinted at Gambit’s true origins several times, calling attention to how Gambit was adopted by Jean-Luc LeBeau, how the records of his birth were erased from the hospital where he was born and how Remy had a different upbringing as the New Sun in another reality. Nicieza also touched upon Sinister and the origin of his interest in the Summers family line in this title. However, he never directly addressed the Third Summers Brother plot with these hints.

The only story that actually tied Gambit to the Third Summers Brother plot was, surprisingly, Chris Claremont’s alternate reality tale, X-Men: The End in 2005. Claremont was the creator of both 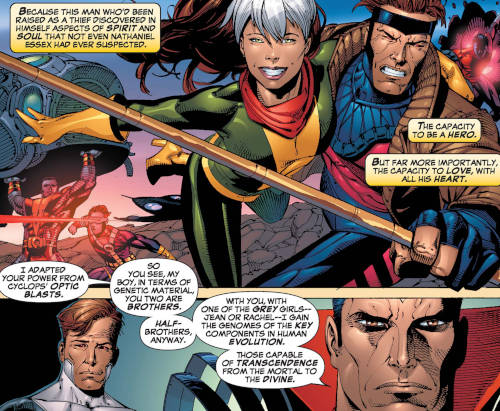 Sinister and Gambit, and he used this maxi-series to explore one of his unused plot ideas for the characters. Claremont had once intended the real Mister Sinister to be an immortal man in the body of a child, suffering from Peter Pan syndrome and relying on the more imposing “Mister Sinister” proxy body to interact with others. Another idea was that Gambit was a third version of Sinister, who secretly infiltrated the X-Men in this more charming, proxy body.

Claremont wove these ideas together with the dangling Third Summers Brother plotline in The End. This version of Mister Sinister was not immortal, but survived by transplanting his mind into younger clones of himself periodically. Wanting to escape from Apocalypse’s control, Sinister plotted to create a clone of the original, unaltered Nathaniel Essex, mixed with the mutant genetic material of Cyclops and the powerful Summers bloodline. Before he could project his consciousness into the infant clone, however, it was stolen by the Thieves Guild on behalf of Apocalypse. Thus, the infant Nathaniel was raised by Jean-Luc LeBeau as his son, eventually manifesting mutant energy powers extrapolated from Cyclops’s genes. According to Sinister, this made Gambit his “son” and Cyclops his “brother.”

In late 2005, almost immediately after The End plot was revealed, Marvel established the secret of the Third Summers Brother was entirely different in the main reality’s timeline. Beginning with X-Men: Deadly Genesis #1, Ed Brubaker introduced a brand-new contender for the Third Summers Brother named Gabriel Summers. First known as Kid Vulcan, Gabe was part of the secret first team of new X-Men sent to Krakoa by Xavier to rescue the original members. One of a quartet of mutants being trained by Moira MacTaggert separately from the X-Men, Vulcan and his friends were thrust into the role of X-Men before they were ready and apparently killed. Xavier covered up their existence before sending his third and ultimately successful team of recruits, including Nightcrawler, Wolverine, Storm, etc.

Gabriel’s origins told how Katherine Anne Summers was pregnant by Chris when they were kidnapped by the Shi’ar. In an expanded version of the previous tale, it was explained that D’Ken 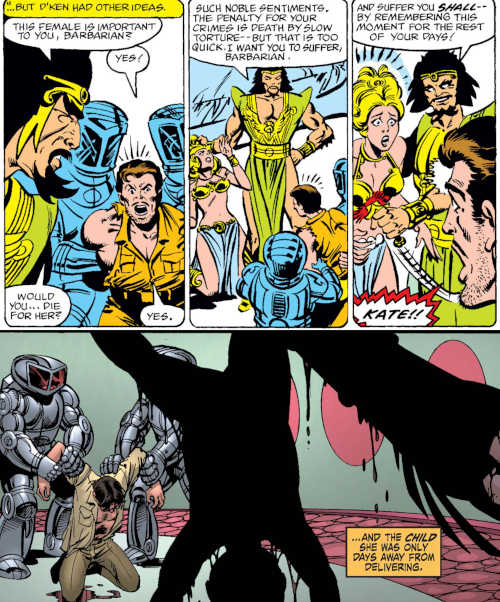 cut the apparently stillborn child out of Kate’s belly as he killed her, all before the horrified eyes of Chris Summers. However, Shi’ar medical technology preserved the infant, not only keeping him alive but age-accelerating the child so he could be used as a productive slave. Gabriel knew nothing of his origins when he was assigned to the slaves serving Eric the Red on Earth, and eventually escaped once his mutant powers manifested.

Vulcan returned from his apparent death on Krakoa in the modern era during Deadly Genesis, driven mad by Xavier’s betrayal and the loss of his friends. His insane quest for vengeance led him to assume the throne of the Shi’ar as Emperor Vulcan after killing D’Ken and provoking the War of Kings with the Inhuman-ruled Kree Empire. Vulcan’s origins not only established him as the Third Summers Brother, but seemingly ruled out the possibility of Adam-X ever officially claiming that title as well. If Kate Summers was killed while pregnant with Chris’s child, then she couldn’t have been impregnated by D’Ken to give birth to Adam as well. Sinister could also have been aware of Vulcan through his spy network on Eric the Red (although it didn’t make sense for Sinister to refer to Scott’s brothers in the present sense in X-Men (2nd series) #23, given Gabriel was believed dead at the time).

Naturally, Fabian Nicieza wasn’t involved in Brubaker’s resolution of the Third Summers Brother plot. Adam-X resurfaced for the first time in thirteen years in 2009, making scattered cameo appearances in the X-Titles, with no further reference to his potential Summers heritage (though 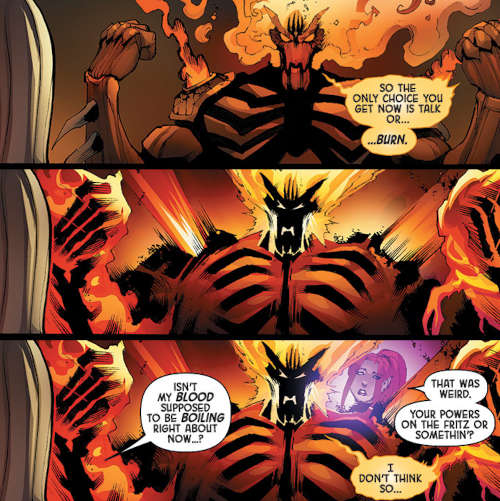 he now answered to “Adam Neramani”). Nicieza had what seemed to be his last word on the subject in 2015 during the Age of Apocalypse limited series, set on Battleworld during the Secret Wars event. A new member of Magneto’s X-Men named Burner appeared, with blood-burning abilities that marked him as a version of X-Treme. Burner had escaped from Sinister’s laboratories and discovered his genetic connection to the Prelates Scott and Alex Summers during the course of the story. This incarnation of Adam-X presumably had no Shi’ar heritage, but it was the closest Nicieza could get to resolving his plot the way he intended.

At least until X-Men Legends #1-2. An anthology series that allowed past X-writers to return to the eras that they made great, Fabian Nicieza finally resolved the Third Summers Brother arc as he intended. Set weeks after Captain Marvel (3rd series) #3, Eric the Red made another attempt on Adam-X by kidnapping Philip and Deborah Summers as bait, sending Cyclops and Havok after X-Treme to rescue their grandparents. Meanwhile, Empress Lilandra had become aware of the Forsaken One as a possible rival to her throne, and commissioned the Starjammers to collect his head. Adam-X was revealed as a eugenics experiment to introduce new genetic material in the 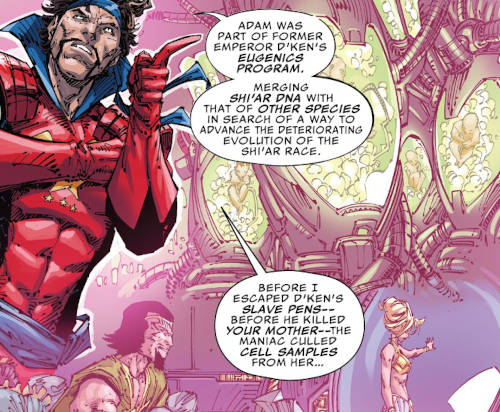 Shi’ar line, with cell samples taken from Kate Summers prior to her death and mixed with D’Ken to engineer a hybrid child. These circumstances allowed him and Vulcan to exist independently from one another. Though Adam-X and the Summers agreed to memory-wipes to hide the existence of D’Ken’s progeny as a threat to the Shi’ar throne, Fabian Nicieza had finally completed his original Third Summers Brother plotline, nearly 30 years after it was introduced.