Description:
The Xavier Protocols were created by Charles Xavier as some sort of failsafe device, should he himself or one of the X-Men or their many associates become a danger to humanity or life itself. There are over 200 entries, apparently one file for each of the X-Men as well as the members of their many spin-off groups. The information in the Xavier Protocols is right to the point - listed are not only the person’s weaknesses, but also the quickest and most efficient way to kill them.

The professor stored the Xavier Protocols in a special chamber built into a crypt underneath the lab complex at Muir Island. While she knew that her old friend was building the place, not even Moira MacTaggert knew what its purpose was. Still, when Xavier designed the chamber’s security systems, making use of alien Shi’Ar technology, he programmed it so that it would recognize Moira and let her in. Once unsealed, the chamber’s systems would constantly scan for the brainwaves of the people inside, each combination of brainprints serving as a key to unlock a specific file.

Chronology:
Although Xavier must have hoped that the Xavier Protocols would never be needed, there was indeed a crisis of such magnitude that the files were opened. Several month after Xavier had shut down the mind of his arch-enemy Magneto, during which some of the master of magnetism’s evil aspects 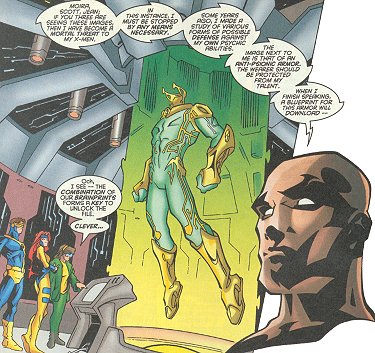 had wormed their way into Xavier’s subconsciousness, did the Professor transform into the villainous entity named Onslaught. Near omnipotent, Onslaught set out to dominate Earth and re-shape it his own image. As soon as Excalibur was informed of Xavier’s transformation, Moira realized that she had to unlock the secret chamber on Muir. She asked Cyclops and Phoenix to accompany her, and the combined brainwaves of the three closest people to Xavier unlocked the file the professor had written on himself. It included the blueprints for a special psi-proof armor, and while the armor proved to be essential in the heroes’ fight versus Onslaught, it couldn’t do anything for the sadness and sense of betrayal that Xavier’s students experienced. They understood that during the many nights their mentor had spent alone in his study room, he was trying to figure out ways to kill his students. [Uncanny X-Men #335, Excalibur (1st series) #100]

Shortly after the Onslaught incident, Excalibur’s leader Nightcrawler and Moira MacTaggert wondered how to deal with the information stored underneath their headquarters. Apparently, once unsealed, the chamber could not so easily be locked up again; even if anyone wanted to. Kurt felt that everyone mentioned in the files should have a say in what would become of the Xavier Protocols. However, before they even gained a chance to discuss this any further, Muir Island was under attack by the Mutant Liberation Front. Though they originally went after Moira’s research data on the Legacy Virus, they found the Xavier Protocols to be an unexpected bonus and thought the information in them would come in handy for future fights with any of the X-teams. Led by Moonstar, the MLF made their way to the underground chamber, but as Danielle was secretly an undercover agent in the MLF, she sabotaged the mission and prevented the Xavier Protocols from falling into the hands of the terrorist group. Expecting further attempts to steal the data, a force field was erected in front of the crypt’s entrance, providing a temporary solution to the problem. [Excalibur (1st series) #104-105]

However, this was not the only copy of the Xavier Protocols. The professor had been typing most of the files at the mansion in Westchester, the data being transmitted into the storage chamber via comm-link. When Operation: Zero Tolerance went into action, their leader, Bastion, made his Prime Sentinels target the X-Men first. Thinking the empty mansion to be without defenses, Bastion had his troops invade it to strip it bare of any technology and to exploit the X-Men’s data on other mutants to hunt down.

Fortunately, Cable had realized the scope of the danger, and intervened. He managed to download all of Xavier’s Files on a disk and destroyed the mansion’s computer systems, thus preventing the Xavier Protocols and other valuable data, such as the Danger Room Schematics or files on the Mutant Underground, from falling into Bastion’s hands. [Cable (1st series) #46-47]

However, the Prime Sentinels’ tampering with the mansion’s computer systems had an unexpected side-effect. Infected with the mutant-hunting robots’ self-repairing nano-technology, Cerebro gained semi-sentience and became a separate entity on itself. Still trying to carry out it’s core programming - to scan for and catalogue mutants - it eventually hunted down the X-Men to place them in stasis tubes. When the mutants wouldn’t stay detained, Cerebro revealed that it also carried the Xavier Protocols and announced it would make use of them; classifying the X-Men as a threat to its purpose. With the Mannite child Nina serving as a human-computer interface link, though, Xavier was able to lure Cerebro into a virtual scenario where it killed the present X-Men. Although it was only an illusion, Xavier was rather shocked to see the Xavier Protocols exacted on his students. [X-Men (2nd series) #84] 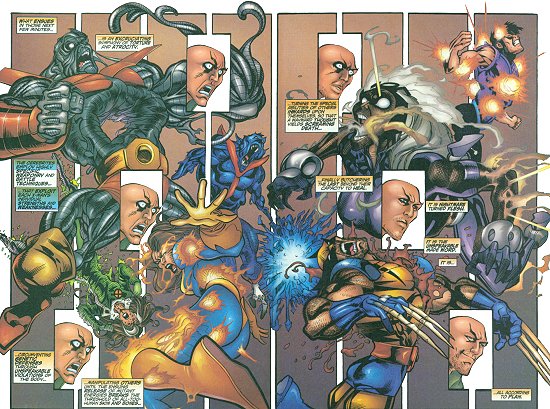 With the sentient Cerebro being destroyed, it is currently unknown how many, if any, copies of the Xavier Protocols still exist. The X-Men rebuilt their mansion’s equipment and at least regained their Cerebro files, probably making use of some back-up copy at Muir Island or from the disk Cable made. Wether the Xavier Protocols were also uploaded into the mansion’s systems again is unknown, just like what Cable did with the computer disk he made. The storage chamber at Muir Island is gone, though, destroyed when Mystique and her Brotherhood of Evil Mutants blew up Moira MacTaggert’s lab complex. [Dream’s End]

To the present day, the Xavier Protocols are a sore spot in X-Men history, and Xavier’s students still have not fully gotten over feeling betrayed by their mentor. Along with his becoming Onslaught, it’s the main reason for the X-Men doubting the professor’s actions from time to time, and they live in constant fear of someone uncovering a copy of the Protocols and making use of them. In fact, when a rather new villain by the name of Vargas entered the scene, and rather effectively countered every move that the X-Men made albeit without having any obvious powers, Sage even wondered wether he could be the Xavier Protocols made flesh. [X-Treme X-Men #3] Stranger things have happened, and while Vargas’ reasons for chasing the X-Men were revealed as something different, his origin was never cleared up.

Xavier Protocol Entries
Only three files of the Xavier Protocols were fully shown. They are listed below with file number, unlocking brainprint combination sequence and content.

Actually this file is both an entry on Charles Xavier, as well as an introduction to the Xavier Protocols. It contained a holographic image of Charles Xavier, reading the following message: “Moira, Scott, Jean; if you three are seeing these images, then I have become a mortal threat to my X-Men. In this instance, I must be stopped by any means necessary. Some years ago, I made a study of various forms of possible defense against my own psychic abilities. The image next to me is that of an anti-psionic armor. The wearer should be protected from my talent. When I finish speaking, a blueprint for this armor will download.“

“Since the loss of his adamantium, Wolverine has become both more and less of a threat. He is divested of his unbreakable skeleton - but his senses and his mutant healing factor have been increased to incredible levels. What would have been a lethal wound to Wolverine three years ago would now be a momentary annoyance. Any assault on Wolverine, in the event of his sanity breaking, would have to be long-range and decisive. His head would have to be severed, and removed utterly from the vicinity of his body to prevent swift flesh and nerve regrowth.“

“Cable is a powerful telepath and telekinetic. But a large part of his telekinetic ability is, at any given time, tied up in controlling his techno-organic disease. Attacks on Cable should make full use of this weakness, with the preferred result of the disease devouring his brain and major internal organs.“